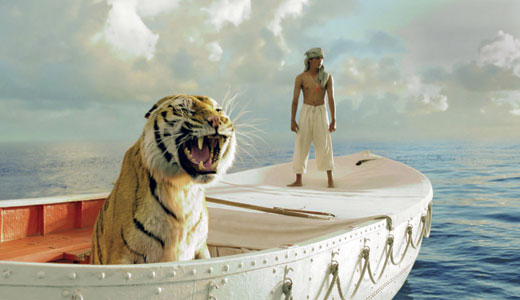 Two of the world’s great actors, Anthony Hopkins and Helen Mirren — neither of which can resist hamming it up when the need arises — go whole-hog in this look at the relationship between the great director and his wife — and his infatuation with Janet Leigh (Scarlett Johansson). Centered on the making of “Psycho,” Hopkins plays Hitch as the sly genius whose clever tongue and razor wit left studio execs, actors and anyone else who got in his way cut off at the knees. Except for wife Alma (Mirren), who knew where all his bodies were buried and had her own creative ambitions to satisfy. Not Hopkins’ best flick, but a fun look at a movie legend.

Director Ang Lee finally makes us forget 2003’s “Hulk” (and winning an Oscar to boot) by placing a shipwrecked young man in a lifeboat with a truly frightening Bengal tiger — and making you believe they find a way to co-exist. It’s probably an allegory for how we must all cooperate in order to survive on our fragile planet, but that’s beyond our mental capacities. Let’s just say it may be the greatest adventure ever filmed; a completely convincing treat for the senses and a poultice for the heart. Epic, beautiful and awe-inspiring; don’t miss it.

This “An Autoblogography About Love, Death & Technology” is by techno guru Tiffany Shlain, founder of The Webby Awards and an advocate for the National Day of Unplugging. She shows us how addictive the urge to communicate can be in a networked world, and how to find peace with your technology by turning it off. But even when off, are you really disconnected? Upbeat and funny, inspiring and downright silly at times; great stuff.

What can we say? We love monkeys! In this one-hour adventure, George and Hundley go rampaging through the countryside, welcoming the return of spring before finding themselves dangling from a balloon high above the city! Can the Man with the Yellow Hat and his friends save the two before they fall? It all ends on a note of gentle wonder. Fun stuff.

FAIRY IN A CAGE

The events in the original “Grave Encounters,” a minor found-footage horro-hit, weren’t real, of course, but the makers of this clever sequel pretend that they were, and then go about proving it in a spooky-fun romp through a real psychiatric hospital. Richard Harmon (TV’s “Continuum”) and friends find the actual haunted looney bin behind the tale, then jump headlong into its madness, hoping their understanding of the first film will save them here. Entertaining nonsense with a huge cast.

We came in late to this series, only after recognizing it as the work of creator Dick Wolf (“Miami Vice”). One of the most successful franchises in TV history, this is the third of his six L&O series (including one in the UK), beginning in 2001 and distinguishing itself by telling modern crime tales in large part from the criminal’s point of view. Kathryn Erbe and Vincent D’Onofrio star as seasoned, troubled police detectives. This two-disc set contains all eight episodes from the 2011 season, including “To the Boy in the Blue Knit Cap” about the death of twin brothers/website owners. Highly recommended.

An upbeat and flirty romcom that just happens to be about a young woman’s first lesbian encounter. Kristina Valada-Viars is heading out to the bars to find a guy for the evening when she meets gay-marriage activist Emily Schweitz, recovering from a bad breakup. To the surprise of both, it becomes a hilarious one-night stand, followed by one of the warmest “next morning” scenes imaginable. Nicely done.

RISE OF THE GUARDIANS

This holiday offering got a lot of flack from critics because it wasn’t the usual syrupy-drippy hippity-hop through worn-out ghosts of Christmas tales past. Instead we get a feisty set of heroes who just happen to be Jack Frost (voice of Chris Pine), Santa (Alec Baldwin), the tooth fairy (Isla Fisher), and the Easter Bunny (Hugh Jackman, nearly unintelligentable). They band together to thwart the plans of Pitch (Jude Law), an evil spirit out to steal the imagination of the world’s children. It’s an original, action-filled animated adventure with lots of sly in-gags for the adults. Buy it.

A good old-fashioned no-budget monster movie from Britain. After a secret military cargo plane crashes in London, four people become trapped in a maze-like storage facility with something not of this world. And it is hunting them. Bwaaahaahaa! Pretty bad, with a couple of skinny-cute Brit cupcakes; we LOVE crap like this!

THIS IS NOT A FILM

This now famous auto-documentary, first begun on an iPhone and smuggled out of Tehran inside a cake, follows the plight of director Jafar Panahi (“The White Balloon”), convicted of committing propaganda against the Iranian government. It’s a “day in the life of a Tehran subversive,” recorded while appealing his sentence — which included a 20-year ban on making films — talking to his lawyer and waxing poetic on the meaning of art with family and friends.

These toy-inspired adventures aimed at young girls are simply too cute to believe. And unlike other CGI animated kid-fare, they have an actual plot! Here, Angelina, a dancing mouse, gets involved in an adventure involving haunts, missing music and a purloined bird. A smart and clever mini-whodunit that kids can join in and solve for themselves.

A pair of “Danger After Dark” films from Japan about a website that will arrange for your tormentors to be killed, but in return you must kill someone else’s tormentor — or be killed yourself! Super-lo-budget horrors starring actor/male-model Naoki Kuwata and retired women’s MMA champion, Butt-Kicker Supreme Mimu Matsumoto; subtitled and uncut.

Aka “The Revived Monster,” this little Mexican “Frankenstein” rip-off is fondly remembered as the vanguard of the hokie south-of-the-border horror film industry that spawned such joys as the “Aztec Mummy,” Mexican wrestler movies and “The Brainiac.” A disfigured doctor lures a spunky newswoman (the lovely Miroslava Sternova) to his lonely lair where he breathes life into the corpse of handsome presidential candidate(!) in a bid for revenge. The whole thing is clearly inspired by Universal Studios films of the ’40s; an absolutely terrible, incomprehensible — if entertaining — flick that only Mexican cinema could invent. Enjoy.

Mary Elizabeth Winstead and Aaron Paul (“Breaking Bad”) are happy young married alcoholics whose relationship falls apart when she decides to quit drinking. The movie is so-so, but Winstead (“A Good Day To Die Hard,” “Abraham Lincoln: Vampire Hunter”) does the best work of her career — and that’s saying a lot! — as she struggles to keep her job and fend off unexpected temptations. Surprising.

THE DEVIL’S IN THE DETAILS

Ray Liotta leads this revenue flick about lethal Mexican drug cartels in Arizona along with Emilio Rivera (“Sons of Anarchy”) and relative unknown Joel Mathews, whose wife and daughter are pawns in Rivera’s scheme to transport drugs across the border. Far better than its pedigree would suggest; this is a surprisingly well-written and directed suspenser. Recommended.

THE MOB DOCTOR: THE COMPLETE SERIES

We were sorry to hear that this had been canceled after only one season; it had quickly become a guilty pleasure of ours. Jordana Spiro (“Dexter”) is terrific as the driven and conflicted Chicago doc who works by day in a major hospital, but by night (OK, sometimes during the day, too), she’s beholding to a lethal mob boss (William Forsythe, “Boardwalk Empire”) who has her kid brother in his sights. The deal is simple: She does whatever he says and he won’t ice her sib. If you like your drama cranked up to 11, this is the show for you.