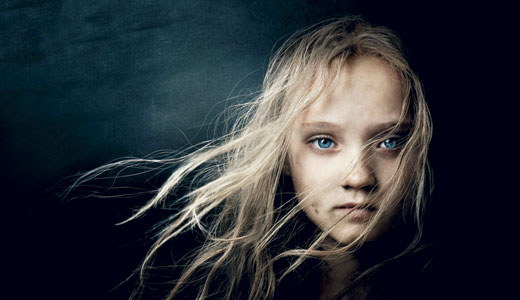 Anne Hathaway, of course, won an Oscar for her portrayal of Fantine, the mother of Cosette, the innocent child who sets in motion a lifetime of cruelty and despair — against the audience! The biggest, loudest, filthiest opera ever recorded, and one of the most powerful, will leave you drained, exhausted and ultimately elevated. Hugh Jackman sings like a bird, as does Russell Crowe (if not in the same league) as the sadly evil Javert. It is to musicals what “Saw” was to horror films: over the top, probably too much, but impressive and entertaining if you have the stomach for it. Recommended.

Jessica Chastain won a Golden Globe for her work as the CIA analyst who spent a decade running down Osama bin Laden, only to find her battle was just beginning when she has to convince the U.S. government to go after him. To us, the real stars are director Kathryn Bigelow and writer Mark Boal, who crafted one of the most immersive, personal and exciting procedurals ever made, boiling down thousands of intricate real-world details into a narrative that even poor dumb shmucks like us could follow. We actually cried when Chastain’s Maya goes to look into the body bag, afraid it has been all for nothing. An amazing film; a must-own.

The United Nations has adopted eight Millennium Goals that include addressing hunger, poverty, ignorance and inequality. Here, eight of the world’s great directors create films designed to entertain while educating the viewer on why these eight goals are so important to continued life in this world. Introduced by Catherine Deneuve; features the works of Gus Van Sant, Wim Wenders, Jane Campion and more. Recommended.

This flick got kinda lost amid the recent spate of wedding-related comedies, which is a shame, because it stands head and shoulders above much of its competition. Kirsten Dunst, Isla Fisher and Lizzy Caplan lead a solid cast that accidentally trashes bride-to-be Rebel Wilson’s wedding dress. A bit racy in spots, but the “R” rating is ridiculous.

CHANCE IN A MILLION COMPLETE COLLECTION

This is, hands down, one of the best comedies ever put on TV. Simon Callow stars as Tom Chance, a man whose life is so filled with bizarre, ridiculous events and coincidences that it’s a wonder he survives with his sanity intact. When he stumbles into the life of a quiet librarian (Brenda Blethyn, “Pride and Prejudice”) the universe goes into overdrive to keep them apart. But despite rabid policemen, a hoard of brutally obnoxious waiters, criminals who seem to live in their closets, and her crazily obsessive parents, they quietly pursue their destiny together. Unique, funny and charming; all three seasons are a must-own.

One of the most over-the-top martial arts films we’ve ever seen. The complex plot involves a warlord’s lieutenant who uses magic to scare convicts into joining his army, while the warlord imprisons a chaste beauty that he intends to make his seventh bride. But no one is who they seem, and a shadowy remnant of the lost Qinq Dynasty secretly works to rid the land of this chaos. Well worth your time.

Dubbed the “First Animated Sci-Fi Lesbian Rock Musical,” this tells the age-old tale of lovers, lost in the bliss of music-making, fighting for their freedom against The Establishment. That fact that the lovers are both female, that they live on Jupiter’s moon Ganymede, and it all takes place 800 years from now is just icing on the cake. Surprisingly fresh, upbeat and inventive, with voices provided by Tim Curry, Claudia Black (“Stargate SG-1”), Ron Glass and Alan Tudyk from “Firefly,” George Takei and Michael Dorn from “Star Trek,” and Claudia Christian (“Babylon 5”).

THE HOBBIT: AN UNEXPECTED JOURNEY

OK, you can forget all those Oscar films now; Peter Jackson has (rather quickly) released this, the most-anticipated video title ever. If you need a review, then you should quickly contact your broker and buy a life. The rest of us know that this is the penultimate telling of J.R.R. Tolkien’s “kid’s tale” set in The Shire (a place just east of Lexington … really!). With Ian McKellen returning from “Lord of the Rings” as Gandalf, Martin Freeman as plucky little Bilbo, and Andy Serkis as the muscle and soul beneath the CGI skin of Gollum. We have some quibbles but won’t bore you with them, just enjoy this marvelous, wondrous and very welcome return to Middle Earth.

Hands down our favorite Judd Apatow movie. Paul Rudd and Leslie Mann pick up the story of Pete and Debbie from “Knocked Up” (our second-favorite), focusing on the inevitable ravages of time on the human body and longtime relationships. As painfully old married dudes, we laughed our asses off at every knowing poke at saggy boobs, limp wieners, weird back hair, boring sex, and the thousand other warmly acceptable insults that come with growing older. Why “warmly acceptable”? Because you find that being old is only a bitch when you have to face it alone. Buy it.

TIMERIDER: THE ADVENTURE OF LYLE SWANN

To us, the ’80s began with this flick. Champion off-road motorcycle racer Fred Ward rides through a secret desert government experiment and finds himself trapped back in time 100 years with no way home. Then bad guys steal his bike. Then a hot bandit (Belinda Bauer) wants his bod. It’s all so stupid! But wonderfully so as Fred keeps studying a tattered Exxon roadmap, hoping to find his way back to the future. With Peter Coyote, music by co-writer Mike Nesmith of The Monkees, and cheezy 8-bit computer effects, this is wonderfully bad; one of our favorite films, now on Blu-ray.

Angus Buchan, originally a Zambian farmer, experienced a spiritual transformation (and an influx of cash) in 1980 when he became an evangelist, leading to the biographical film “Faith Like Potatoes.” This follows up on that movie, looking at the lives of three men (portrayed by actors) who consider themselves saved by Buchan’s ministry en route to one of his Mighty Men Conferences.

This unusual film takes place in an Argentine park/cemetery, home to many large mausoleums that sit like mansions along paved streets. It is a city unto itself, heavily used by the (living) populace to get from place to place. The actual storyline takes place not along its streets, but along its chronology — through its history — revealing famous people and events, ultimately exposing the bones of the city through its (once) living, breathing population. Or something like that. A treat for adventurous viewers.

What can we say? The grandpappy of the ghostbuster genre keeps churning on! This season includes some of their most entertaining locales yet, including an amusement park, a bed and breakfast and a brewery. But the best outing is a trip through a 1700’s mansion, the site of a slave revolt that ended in the murder of the slavemaster and the hanging of the slaves! Truly spooky. This season also bid a fond farewell to series originator Grant, who is moving on to more earthly pursuits.

A pair of poor roguish suitors court two wealthy and beautiful Victorian widows, following all the rules of gentlemanly conduct of the day. Imagine their shock when one of the women suggests that they shack up for a month to see if they are compatible! This is the first-ever Blu-ray release of a classic B&W romantic comedy starring Beatrice Lillie, Googie Withers, Clive Brook and Roland Culver. Recommended.

A real nice boy-girl picture with an attractive and believable cast. High-schoolers Dylan O’Brien and lovely Britt Robertson meet at a party. When it gets out of hand, they run from the cops, hiding in her bedroom where they innocently fall asleep. As Mom and Dad shout for the girl to get out of bed the next morning, the guy panics and jumps out the window, after which their buds give them both lame dating advice. Admittedly, that seems pretty stupid, but it’s actually much better than it sounds. With Victoria Justice and Molly C. Quinn.

THE HUNT FOR BIN LADEN

This Smithsonian Channel special documents much of the same material as “Zero Dark Thirty” but presents it more directly, going further into the details and side stories than a theatrical movie could hope to. Most interesting to us was the way that the CIA, FBI, the White House, Congress and others stumbled and bickered over who had the authority to investigate, prosecute and lead the search, possibly adding years to the process and probably costing additional lives. A perfect companion to “ZD30.”

WWE star Mike “The Miz” Mizanin and seriously sexy Ashley Bell star in this boilerplate “a Marine on leave discovers that his sister has been kidnapped by violent extremists … Oh, and they are plotting a terrorist attack, too – and only he can stop them!” nonsense. Hey, any excuse to put Ashley in front of the camera is OK in our book; gratuitous and noisy, just like Rambo used to do it.