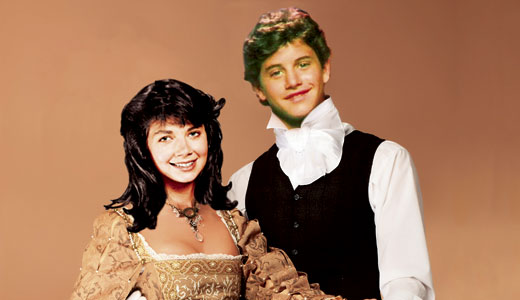 ‘Show Me That Smile: A Tribute to Sitcoms of the ’80s’
An Alley Theater production. Continues through April 20. Directed by Kenn Parks.

The folks at Alley Theater, Louisville’s very own experimental theater company, have jumped in a DeLorean and gone back to the ’80s for their latest musical adaptation of Shakespeare’s “Romeo and Juliet.” Titled “Show Me That Smile: A Tribute to Sitcoms of the ’80s,” the production substitutes popular characters from ’80s sitcoms into the roles. It’s no longer the Montagues vs. the Capulets — it’s the Keatons vs. the Seavers. And instead of taking place on the streets of Verona, most of the action transpires in a mall food court.

The star-crossed lovers in this story are Mike Seaver and Mallory Keaton, and they do their darndest to be together by hiding among the clothing racks at United Colors of Benetton and behind life-size figurines of Freddy Krueger and Jason at Spencer’s Gifts.

The Seaver family, of course, is from the sitcom “Growing Pains,” while the Keatons are from “Family Ties.” Other popular ’80s characters also show up in this adaptation, including Punky Brewster as the prude Rosaline who Mike dumps for Mallory; Arnold and Willis from “Diff’rent Strokes,” taking on the roles of Mike’s best buds; Mrs. Garrett from “The Facts of Life” as the nurse; Cliff Huxtable from “The Cosby Show” as a mall security guard inspired by Friar Laurence; and Mr. Belvedere as a drug peddler loitering at the mall. In addition, the director further “tweaked” the Shakespearean masterpiece by incorporating the adorable characters Webster and V.I.C.I., the robot from “Small Wonder,” both of whom make cameos as themselves and have absolutely no ties to the original work.

The action begins to escalate when Steven and Elyse Keaton find out their daughter is interested in the son of psychiatrist Jason and his reporter wife Maggie. Mr. Keaton blows his totally far-out top and demands a “very special” meeting in the food court near Orange Julius. This leads to the story’s climax, as the families gather around to logically sort out the affair like good middle-class, suburban, white families should.

Tybalt is played superbly by Alf, who often runs through the scenes chasing cats. And Arnold as Mercutio offers up the play’s most memorable line when he finds out his best friend wants to, like, go with a Keaton: “What’chu talkin’ ’bout, Romeo?”

The production is fast-paced and well executed within the constraints of a shopping mall. Seeing all the characters in one place at one time brings back a flood of memories — including but not limited to your first time trying Magic Shell, receiving a Transformer for Christmas, listening to a tape of the Go-Go’s on a boombox, and seeing “Jaws 3-D” in a theater.

Run, walk or do the Robot to “Show Me That Smile” — you won’t regret it. (Side note: I commend director Kenn Parks for not including the annoying characters of Larry and Balki from “Perfect Strangers.”)