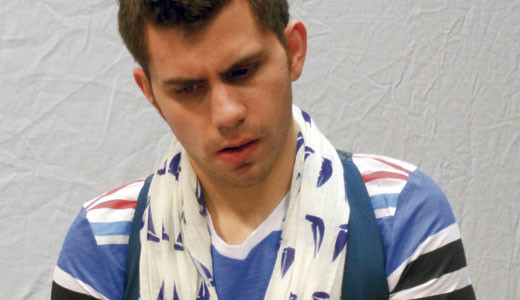 Abraham Lincoln is arguably the most revered president in our country’s history. Countless books and films have been made about him, but his personal life remains somewhat of a mystery. In recent years, theories have circulated that perhaps Lincoln’s sexual appetite ran a bit queer, which is the basis for Bixby Elliott’s new play, “Abraham Lincoln Was a Faggot.”

Pandora’s New Play Project 2013 winner concerns itself less with convincing its audience that the 16th president was gay and more with asking what would it mean if he was, examining the impact that could have on a young person grappling with his own sexuality. The idea came to the New York City-based playwright when he stumbled across a series of educational books on presidents meant for first-graders; he became intrigued with how history gets told, what gets left out, and why it can’t be more complex. The title came first, and two stories that intertwined and informed each other quickly formed. “One explores the possible homosexuality of Lincoln, and the other story involves a young man by the name of Cal who is exploring and coming to terms with his own homosexuality, and he does that through his research of Lincoln,” Elliott tells LEO.

“The play definitely is a comedy,” he stresses. “It takes a gentle, light-hearted look at Lincoln and his sexuality, it goes into his relationship with both Mary Todd and Joshua Speed, who he had a very close and tight bond with that continued over the years until Lincoln became politically active. Many historians theorize that the relationship was more than platonic, that it actually was an affair of the heart, and the play takes a look at that in a humorous, emotional and dramatic way.” The modern-day story with Cal finds a young man discovering his sexuality. He writes an essay on Lincoln for a school project, and it gets chosen to be read at Ford’s Theatre in Washington, D.C.

So why the controversial title? Even by Elliott’s own admission, the play is pretty tame. There’s nothing really controversial about it. “I guess using that title has to do with really fully and completely taking back that word,” he says. “Or at least beginning a conversation or a journey with audiences about how to take that word back. The title itself, in conjunction with the play, can start a conversation about that word and how it affects people, and open up a dialogue.”

After Thursday’s show, Pandora is hosting a “Meet the Playwright” opening-night reception with Elliott.