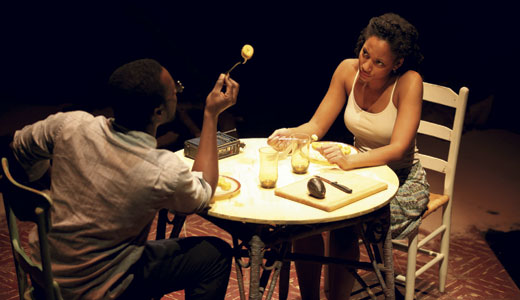 ‘Cry Old Kingdom’
Continues through April 7 as part of the Humana Festival of New American Plays. Written by Jeff Augustin. Directed by Tom Dugdale. For tickets or info, go to actorstheatre.org or call 584-1265.

This year’s Humana Festival of New American Plays features works by high-profile writers like Will Eno (a Pulitzer Prize nominee) and Sarah Ruhl (who holds a MacArthur Fellowship). But it’s the opportunity to discover new voices that make this festival an exciting part of America’s national theater scene.

And Jeff Augustin’s “Cry Old Kingdom” is a sparkling example of why so many theater people descend on Louisville every spring. Set in Haiti in 1964, at a moment when “Papa Doc” Duvalier was cementing absolute control over the country, “Cry Old Kingdom” is an ambitious, exciting and moving exploration of the scars a brutal, torturous regime inflicts on all its people — whether they actively resist, try to escape, or simply seek solace in disengagement.

At the center of the story is an artist, Edwin (Andy Lucien), whose portraits of Haiti’s ordinary citizens once aroused the regime’s ire because his subjects didn’t smile enough. Having eluded imprisonment in a rural village near the sea, he’s officially “dead” in the eyes of the regime. His spirit is deadened as well, it seems, until while strolling the beach he meets young Henri Marx (Jonathan Majors), who is building a boat and planning his escape to America.

Henri has been marked by the regime — his father and brother capriciously murdered, his mother destroyed. And he dreams of liberty in a new land. Edwin’s wife, Judith (Natalie Paul), on the other hand, is an active and optimistic revolutionary who believes deeply in the possibility of bringing down the regime.

Three characters. Three fundamentally different responses to tyranny. And three brilliant performances. Augustin’s script is rich in ideas, images, language and anecdote, and he examines questions around love, loyalty, art and revolution in novel and provocative ways. But his characters are creatures alive, not didactic messengers. And director Tom Dugdale and his cast bring those characters to life with bristling physicality. Natalie Paul’s Judith is a deliciously sensuous revolutionary, as passionate about her man as she is about the resistance. In the beginning, Jonathan Majors plays Henri as a diffident, frightened child, but as he goes about the business of building his boat, he grows into a man of burnished muscle. And Andy Lucien’s focus on Edwin’s intellectual and artistic distance serves to emphasize his intimate emotional epiphanies.

It’s notable as well that despite the economy of means, the entire production crew has collaborated to create an exquisitely realized world. Daniel Zimmerman’s set, with its sandy beach, scattered driftwood and a small cottage is simple but effective. Lorraine Venberg has clothed the characters in perfect dress — especially the simple shifts that reflect Judith’s ebullient spirit. Sound designer Benjamin Marcum punctuates the scenes with wonderfully evocative music. And the lighting design, by Russell H. Champa and Dani Clifford, is subtle and — when the time is right — devastating.