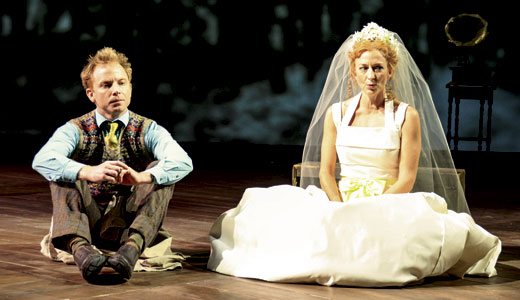 ‘Gnit’
Continues through April 7 as part of the Humana Festival of New American Plays. Written by Will Eno. Directed by Les Waters. For tickets or info, go to actorstheatre.org or call 584-1265.

From the very beginning of Will Eno’s new play “Gnit,” we know that the titular hero (or anti-hero), Peter Gnit, is a liar. We know because his mother tells him so, before he has a chance to get in a word, in a brisk, bitterly comic opening scene. It’s a scene that echoes the opening of Henrik Ibsen’s “Peer Gynt” — the ideological and dramatic template for Eno’s bravura modern riff on one of theater’s strangest classic works.

Voyages frame many of the world’s great narratives. We love quests for honor and booty, encounters with Sirens, windmills and Galapagos tortoises. Our imaginations are captured by sea voyages, wilderness treks, motorcycle diaries, pilgrim walks and itineraries of eating, praying and loving that promise transformation and redemption.

Dan Waller imbues Peter with sinister vacuity that manifests in grandiose speeches, noble postures and a richly comic indifference to those around him. He has the placid, blank face of a mime who is determined to reveal nothing of his inner life. That blankness might be an unsettling mirror on the world, but Waller’s impeccable timing and Eno’s finely honed text — which overflows with brilliant off-handed laugh lines — are so startlingly funny that most of us won’t feel the prick of the humor until long after the curtain calls.

Peter’s travels start when his long-suffering mother (played by Linda Kimbrough, with a sharp tongue and gimlet-eye) reveals to him that a lass he once loved is set to be married. In short order, Peter abducts the girl, flees, evades his pursuers, gets bored with the girl, dumps her, becomes infatuated with another girl, loses her, and sets out on a trip that will take him through exotic and fearful adventures (including encounters with a strange cult of realtors; various cutthroats, thieves, beggars and journalists; a strangely vacant space between spaces; a Sphinx with nary a riddle; and more) before he finally wends his way back home.

His journey is assisted by Antje Ellermann’s remarkable sets, Matt Frey’s lighting, wonderful sound from Bray Poor, and Connie Furr-Soloman’s costumes. But it’s a superb ensemble performance that makes this such a satisfying production. Kris Kling, Kate Eastwood Norris and Hannah Bos (who plays Solvay, Peter’s one sustained love interest, other than himself, that is) show up in so many different guises — all played with detail and supreme confidence — that you’d need a scorecard to keep track. And Danny Wolohan — billed as Town — is an ensemble unto himself, flickering from persona to persona as he embodied an incoherent mob of townspeople. One audience member compared him to the late Andy Kaufman — high praise, and quite apt.

As for what Peter finds at the end of his journey, you’ll need to attend the play — and you certainly should.