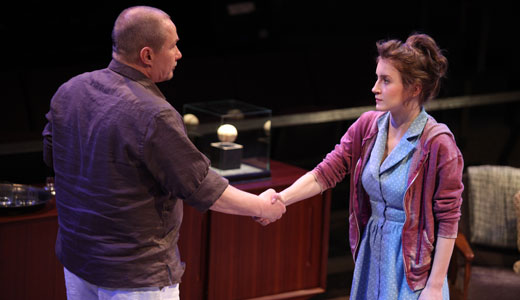 ‘The Delling Shore’
Continues through April 7 as part of the Humana Festival of New American Plays. Written by Sam Marks. Directed by Meredith McDonough. For tickets or info, go to actorstheatre.org or call 584-1265.

Celebrity — its corrupting allure and thin substance — is the driving force behind “The Delling Shore,” by Sam Marks, the opening production in this year’s Humana Festival of New American Plays, which runs through April 7 at Actors Theatre of Louisville.

In this case, the celebrity is writer Thomas Wright (Jim Frangione), who owns a National Book Award but who seems to define his rank in the writers’ pantheon not through his own work, but through casually name-dropped connections to folks who are even more famous than he (Jonathan Franzen, for instance).

Tom’s fame and connections have brought three other people together for a weekend at a prosperous book-lined beach house (nicely designed by Daniel Zimmerman). Two of the three are also writers. Frank Bay (Bruce McKenzie) is a friend from the past who long ago — before fortune found him — allowed Tom to sleep on his couch for a time. Now Frank is a struggling writer who wants a blurb for his new book. Frank’s daughter Adrianne (Catherine Combs) wants something as well: She’s an undergraduate who dreams of writing and hopes to land a summer internship with Tom.

Then there’s Tom’s daughter Ellen (Meredith Forlenza), a 20-something banker. Though she isn’t a writer (except for incessant text messages), her boyfriend is — and she’s apparently up for the weekend because the boyfriend (who, much to her consternation, never shows up) wants to meet her famous daddy.

If the characters are to be believed — and there’s not a single reliable character in the bunch — only Tom, played with bulldog bluntness by Frangione, grasps that fame isn’t a currency easily shared — or even enjoyed by the owner. He says of himself that he’s lucky — and based on a failed marriage and an alienated relationship with his daughter, it’s clear luck hasn’t bought him much other than financial prosperity. His daughter Ellen — whose aggrieved petulance is well-framed by Forlenza — views the weekend guests as interlopers panhandling for celebrity handouts. Frank — by turns wheedling and bullying in McKenzie’s portrayal — is a systematic and effective manipulator of everyone around him. Though his ostensible reason for the trip is to introduce Tom to his daughter, it’s clear he’ll say or do anything just to get that blurb.

Frank’s daughter Adrianne may be the most cynical of all. Early on she claims a virtuous idealism: She wants to earn the internship not based on her father’s connections but on merit. But at the end, in a fine, furious explosion of emotion — a moment so viscerally intense it seems out of context with the studied feints and dodges that pervade the rest of the play — she’s furious at her father for failing to get her what she wants.

A few more explosions might help this play, which feels more prototype than a finished product. Director Meredith McDonough moves the cast at a fast clip, and there are enough interesting ideas to provoke plenty of discussion (and an entertaining “book game” that serves as the most amusing part of the play), but those ideas need more interesting characters to carry the message.