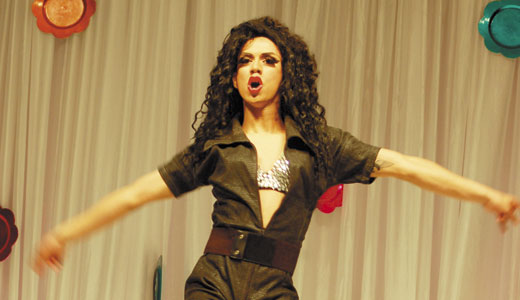 Bound by the emotional tension of melancholy, palm-muted notes and the vocal harmonies of songwriter counterparts Rob Crow and Zach Smith, there’s an ever-present haze of restraint to Pinback’s rhythmic melodies. The emphasis on timing also promises a seamless live set. While the band is a constant duo, they tour with drummer Chris Prescott, who has played on their last two records. They typically perform in front of a video projection, which features visuals edited by Crow. His most recent video for “Sherman,” off the new record, Information Retrieved, is composed of clips from the Russian sci-fi film “Planeta Bur” and the knock-offs that followed it. JP Incorporated (ex-Pleaseeasaur) of Comedy Central Records opens the show. —Lara Kinne

U of L’s Gheens Science Hall

“Girl Rising” is an independent film that tells the stories of unforgettable girls born into unforgiving circumstances. Playing this weekend at U of L’s Gheens Science Hall and Rauch Planetarium, the film spotlights young women from Nepal, Peru, Haiti, Egypt, Sierra Leone, Afghanistan, Ethiopia, India and Cambodia who have overcome obstacle after obstacle in pursuit of an education. Actresses Anne Hathaway, Kerry Washington, Meryl Streep, Salma Hayek, Cate Blanchett and Selena Gomez narrate the film, which is directed by Academy Award-nominated director Richard E. Robbins (“Operation Homecoming: Writing the Wartime Experience”). The film is part of a social action campaign by 10×10 to promote education for girls around the world. Admission is free. —Kevin Gibson

‘Taming of the Shrew ‘

Savage Rose is a local theatrical company devoted to re-imagining classical plays, determined to show their continued relevance to modern life. In the next two weeks, Savage Rose will be performing “The Taming of the Shrew,” Shakespeare’s famous comedy, and “The Rover,” a comedy by Aphra Behn, one of the first successful female playwrights. Both productions are centered around social class and satire, intended to entertain the audience with absurd, pointed jabs at issues still relevant today. Savage Rose aims to prove the relevance of Shakespeare and Behn outside of literature. They’ll tackle class and gender stigmas, all while maintaining the play’s original dialogue. —Natalie French

U of L’s Student Activities Center

No, Pink isn’t returning to town for an encore performance, but her infectious attitude and spirit surely inspired some of the performers in this event. Now in its 16th year, PINK is U of L’s student-produced amateur drag and variety show. It actually holds the record as the longest-running student organized fundraiser on U of L’s campus, and proceeds, as always, benefit the Office for LGBT Services Scholarship Fund. A mix of seasoned and first-time drag queens and kings will entertain, including “Mother of the House of PINK,” Reva Devareux, and emcee MC2. This is drag for a good cause, so sit back and enjoy. —Sara Havens

Paws for the Planet

Whole Foods Market is more than just a fancy grocery specializing in natural and organic fare — they care about dogs, too! This weekend, the store will hold a pet adoption fair and family-friendly festival that includes a dog photo contest, with categories like “Best Smile” and “Sweetest Senior.” Along with the contest, there will be food and drinks (ranging from smoothies to beer), baths (for the dogs) and face painting (for the kids and young at heart). Money raised will benefit the Whole Planet Foundation, the store’s nonprofit effort aimed at alleviating poverty in developing nations. Everyone who enters the photo contest gets a digital pic of their pup; call 899-5545 to set up a specific photo time. —Natalie French

Dress to the nines, have some cocktails, bid on a silent auction, dine at the historic Henry Clay while enjoying Doug Finke’s small group swing, then dance to the Jumpin’ Jive Orchestra (led by John LaBarbera), and you have an evening that’s not only fun, but dedicated to a good cause. The fourth annual Jumpin’ Jive Benefit, presented by the Friends of U of L’s School of Music, also includes costume and dance contests. “The Friends have really tried to focus on using funds to go directly to student needs, rather than school needs,” says planning committee member Jane Halliday. Most of the money has gone to scholarships, but the Friends have also supported projects such as Jazz Fest and, last year, “We gave some money to the music therapy students to help them pay for a trip to a music therapy convention to deliver papers.” —Martin Z. Kasdan Jr.

Like the bastard child of Fun. and Animal Collective, Javelin produce upbeat music that’s not afraid to challenge its audience. Despite their most recent album, Hi Beams, a comparatively straightforward affair, Javelin has a history of sonic exploration that has often translated into weird live ventures. In fact, the duo of Tom Van Buskirk and George Langford has traditionally created music that is heavily sample-based, hooking their gear up to devices that broadcast their sound via FM waves, and then having the audience bring jamboxes to serves as part of the P.A.; everyone is meant to be part of the fun. Although their newest outings see the pair embracing conventional instrumentation, it remains likely they will still engage the crowd. Opening the set is Raleigh Moncrief, a veteran recording engineer and producer. —Syd Bishop

About 1,000 tons of carbon dioxide were released into the atmosphere every second last year; the previous two decades were the warmest in millennia; and according to the UN, humans have caused 90 percent of global warming since 1950. Despite greater worldwide awareness of these dire facts, scientist and journalist M. Sanjayan argues the environmental movement has faltered and needs an overhaul. The solution, he believes, lies in some unlikely conservation allies: big business, young people and the rural poor. As lead scientist for the Nature Conservancy and a CBS News contributor, Sanjayan has investigated climate change extensively, and he’ll share his knowledge in Louisville during a talk entitled “Saving Earth in the Age of Man: Conservation in a Human-Dominated World.” A reception will follow in the nearby Hite Art Galleries in Schneider Hall. —Sarah Kelley

For a writer of short stories, there can be no more transcendent indicator of success than to receive two different literary prizes on the same day. That’s just what happened to Claire Vaye Watkins on March 13, as she was declared winner of the Story Prize as well as a major award from the American Academy of Arts and Letters. The book that has brought this acclaim is “Battleborn,” for which Watkins is giving a reading/signing at U of L’s Belknap Campus. Her collection breathes fresh life into one of literary America’s eternal subjects: the unique relationships that people develop with each other and their surroundings when in the vast ruggedness of the West. Watkins was raised in Nevada and has an extraordinary ability to observe, report and imagine. Her family legacy includes participation in the notorious Manson family. —T.E. Lyons

Motherlodge has returned with its abundance of art, theater and music. “This year will mark Motherlodge’s fifth year of existence,” says founder Ray Rizzo. “Our Live Arts Exchanges began as a celebration of the eclectic … (and) we have found Lodges in over 25 venues between Louisville and New York City …” While there are too many events and locations to list here, a few highlights include: the theatrical event “Irina’s Name Day Party,” musician Corn Mo, and artist Evan Fugazzi (at Galerie Hertz through April 6). “Wish I could take credit for discovering … Fugazzi,” says Billy Hertz. “(Motherlodge organizer Teresa Koester Mills) provided me with dozens of exceptional artists to view, but as it usually happens, one stood way out above the rest of the pack (and) made the hairs stand up on the back of my neck …” —Jo Anne Triplett

When people toss around “Brooklyn” as a summation of a way of modern life, a band like Grizzly Bear might be what they think they’re talking about. Four guys too old for “Girls” but too young to be in The Strokes, they seem educated and tasteful but more down-to-earth than preppies Vampire Weekend, and they lack the exotic appeal of neighbors TV on the Radio or the Yeah Yeah Yeahs. Their avant-garde baroque tendencies have become more streamlined and accessible over the past eight years, making them too poppy for the underground and yet too weird for the Adele masses. Yet what it all adds up to is one of the best bands in the country today. Their latest album, Shields, is a work of beauty, and they’ve proven to be a thrilling live band. —Peter Berkowitz

When discussing 20th-century photography, many names quickly come up: Alfred Stieglitz, Ansel Adams, Edward Weston. Add Paul Strand to the list. Stieglitz praised his work, saying it was “devoid of trickery … (His) photographs are the direct expression of today.” The Louisville Visual Art Association is showing Strand’s “Mexican Portfolio” as part of the “Music Unwound: Copland and Mexico” project in partnership with the Louisville Orchestra and U of L’s School of Music. Strand was a master of the photogravure, a combination of photography and printmaking. The exhibition features 20 plates of the people, architecture and landscape from Strand’s 1932-33 trip to Mexico. A panel discussion, “Paul Strand and Mexico,” will be on Tuesday, March 26, at PUBLIC. The reception is 5:30 p.m., discussion 6:30 p.m. —Jo Anne Triplett