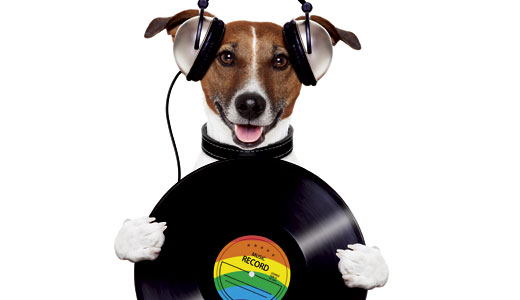 Feeders Supply has run 14 regional stores for several decades, and now they’re investing in today’s hottest retail concept — a micro-record store. Cat Scratch Fever will focus exclusively on used and broken vinyl records found in Goodwill stores, and will take up 500 square feet of Feeders’ downtown location (in the section where customers were previously able to adopt pets needing a new home). You’ll find “everything you need for all the pets you feed” and enough vinyl copies of Donna Summer’s Bad Girls to make your wife question staying with you. Store founder Axl Henley, who also plays keyboards with local band Urine Trouble Now, said, “The only thing I love more than peddling dog food is losing money on a tiny record store. Why did I go to college?”

Why did the Kentuckian cross the bridge? Well, certainly not to get to the other side, because it’s currently impossible to reach the shores of Indiana from the Big Four Bridge. That’s coming later this summer, officials say. So what do you do when you’ve come to the end and now have to travel back to the other side, dodging steaming piles of dog doo? Launch spitballs at Southern Indiana, of course. Yell insults and dick jokes about them not finishing the job. Give them the finger, if you like. When you start to feel better about yourself, turn around and head home.

Take your mama out

Are you in the mood for watching two brutes wildly slug each other, yet tired of the glitzy professional display of talent on televised UFC or boxing? We suggest you head to T Eddie’s Bar & Grill in Germantown on a weekend night, where odds are you will witness at least one drunken amateur brawl pop up out of nowhere right next to your table. The participants will be random, the timing will be spontaneous, and the fighting styles will be crude and savage, so keep your head up to avoid getting caught in the crossfire of flying beer bottles. Unlike the elaborate ring entrances to canned pop music you see on TV, the soundtrack will be the sweet sounds of Germantown’s finest belting out the classics of David Allan Coe and Lynyrd Skynyrd on karaoke.

It’s time once again to celebrate Louisville’s eclectic entrepreneurs and community spirit at the (kinda, sorta) monthly Flea Off Market. There will be vintage finds, handmade wares, local food and craft brews aplenty at this awesome event, assuming it actually takes place as advertised. Reasons for potential cancellation, postponement or venue change include even the slightest risk of inclement weather, ranging from potential clouds and imperceptible drizzle to a mild wind blowing in ever so softly from the northwest (or if Venus is in retrograde). If by chance it is exceedingly sunny this weekend, the start time will be pushed back (details TBD) to minimize the risk of glare coming off any of the market’s shinier goods.

If you’ve ever longed for something you couldn’t afford — a BMW 5 Series, Prada sunglasses, that adorable but overpriced St. Matthews Cape Cod just off Seneca Park — stop dreaming and start doing. Take a cue from the U.S. government and raise your family’s debt ceiling. It turns out loans and credit cards are as easy to come by as herpes in a frat house, so what are you waiting for? As for the astronomical interest rates — just figure out a way to pay off your increased debt load without a rise in income, and you’ll be fine! What could possibly go wrong? Now go get you some material goods … it’s the American thing to do.

Are you a civics-minded person who wants a better understanding of why today’s Republican Party has lurched to the far right and shows no sign of budging? Want to know why Sen. Mitch McConnell is suddenly abandoning his love of federal spending in Kentucky? Well, we suggest you attend next week’s Tea Party rally to see for yourself. These self-certified constitutional scholars will school you on why Barack Obama is the reincarnation of either Hitler or Stalin, and how all of your freedoms and liberties are soon to be gobbled up by his forthcoming totalitarian dystopia. As a plus, you can pick up some premium merchandise, such as the tasteful “Somewhere in Kenya, a Village is Missing its Idiot” bumper sticker. Such displays of patriotism will be either frightening or hilarious, depending on your tastes.

Having trouble paying the mortgage? Credit card bill astronomical following an ill-advised shopping spree? Or maybe you need some extra cash for a night out you couldn’t otherwise afford? Then consider Kickstarting your life! Billed as “the world’s largest funding platform for creative projects,” Kickstarter has become the go-to for anyone with A) a need for cash, B) an idea for how to spend that cash, no matter how dumb, and C) the ability to relay their pitch in a way that sounds like a legitimate business proposition as opposed to flat-out begging. So instead of saying you need $2,000 to get a new transmission for your Jeep, request financial backing to help you realize the dream of traveling cross-country with your new girlfriend, a creative automotive adventure you will document through blurry, poorly cropped photos.