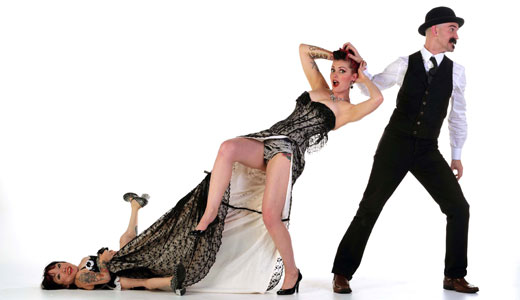 Long before the Waverly Hills Sanatorium became a haunted tourist destination, it was a haven for the sick. The hospital opened in 1910 to accommodate patients stricken with tuberculosis, a deadly bacterial disease that was rampant in Louisville’s swampy Ohio Valley climate. It’s in this capacity that Waverly Hills serves as the historic setting for Louisville native James Markert’s new novel, “A White Wind Blew.” The protagonist is Dr. Wolfgang Pike, a doctor and pianist who believes in the therapeutic powers of music, an unpopular notion among his hospital colleagues. On Thursday, Markert will sign copies of the novel, the latest in a writing career that includes penning the screenplay for “2nd Serve,” a film produced by fellow Louisvillian Gill Holland. —Sarah Kelley

‘The History of the Devil’

Clive Barker is known, first and foremost, for his mastery of horror. His works are ambitious and frightening, and it is this quality that has garnered him a large following in Louisville. It is local John Hetzel’s work, however, that brought Barker’s work to life: “The History of the Devil,” in Hetzel’s hands, has deepened, broadened and carefully stepped into a new light. A forlorn and tired Satan decides he misses home, along with a whole list of things: his wings, his grace, his elegance. He calls a trial to prove his worthiness, but the audience is confronted with a troubling notion. As Satan is faced with each great human disaster, a question is asked: Was it simply the failure of man, or did the Devil himself cause these tragedies? —Natalie French

There are dancers, and then there are dancer-illusionists. Not only are the members of the MOMIX dance company some of the most skilled, athletic dancers in the country, what they do onstage with their bodies and creative use of costumes, simple props, projections and puppets takes dance performance to a new level. You may recognize them from a Hanes or Target commercial, and it’s easy to get lost in their many clips on YouTube. On Friday, they’re performing “Botanica,” which illuminates the stage with the beauty of the changing seasons to a score that’s just as eclectic as they are, with tunes ranging from Vivaldi to birdsong. Warning: Production may cause or intensify spring fever. —Jane Mattingly

The ever-prolific Anwar Sadat perform the same precarious balancing act as Olympia’s late, great Unwound, their spiritual predecessors, by combining just the right amounts of aggressive and melodic in their music. Anwar Sadat is celebrating the much-anticipated release of Gold, their full-length LP, which comes out on Sophomore Lounge. The trio will follow this show up with a brief tour in support of Gold that takes the Louisville up-and-comers along the East Coast. Also playing are local hardcore champions Whips/Chains, whose d-beat hardcore stylings are best witnessed live. The New Mexico round out the bill, bringing their energetic brand of punk to the table, a perfect complement to the other two bands. This ought to be one blistering line-up, so be ready. —Syd Bishop

The Swiss DJ duo In Flagranti, known to their mums as Sasha Crnobrnja and Alex Gloor, probably haven’t been to Kentucky before, but they have spent many productive years in New York. They founded the Codek Records label in 1996 and have been releasing In Flagranti records since 2002, when show presenters and fellow attraction OK Deejays were still young enough to think Moby was an example of a DJ. Children of the 1970s, In Flagranti enjoy some of the most sinfully fun relics of that era, such as Italian disco sounds and vintage porn imagery. Song titles such as “Sexx Piss Tool,” “Genital Blue Room,” “Teaching Children How to Swear” and “Brash & Vulgar” provide clues. Ah, Europe, so much less uptight than us! —Peter Berkowitz

Go-Go Amy’s Pretty Things Peepshow is home to all things strange and lovely: The show is run by burlesque dancers who breathe fire and swallow swords, throw knives, and otherwise risk their lives for their audience’s enjoyment. It is a masterpiece of vintage oddities, inspired by Amy’s own experiences with sideshows and her flair for the burlesque. And if these beautiful dancing ladies aren’t enough, the Pretty Things Peepshow also sports its own in-house band, The Peepin Toms, named after their mother show. Amy has built, from the ground up, a traveling roadshow that has minted its own kind of odd — a definition that suits Louisville perfectly. —Natalie French

It seems like it’s been decades since the angsty pleas of adolescent boys filled the mall with the age-old, voice-cracking debate: Which is better — “Space Invaders” or “Galaga”? But in truth, it’s only been a year, and this weekend it’s time to dust off your angst and grab your joystick again, because the third annual Louisville Arcade Expo is set to kick off. It will feature mall classics like “Donkey Kong” and “Eight Ball,” plus, you’ll be able to play all of your favorite retro game consoles, including Atari 2600, Commodore 64 and Sega Genesis. This year’s keynote speaker is pinball wizard (a reference I’m sure he never tires of) Roger Sharpe, and a free concert by 8-bit game musician Ricky Henry, who will perform with nothing more than an original Gameboy. —Brent Owen

One of the first signs that spring is near has nothing to do with our moody weather — it’s time for the 40th annual Ancient Order of Hibernian’s St. Patrick’s Parade to flash its green and stroll down Baxter Avenue and Bardstown Road. More than 50,000 residents either marched in or watched last year’s parade, and organizers are hoping to reach those numbers again. This year’s theme is “Forty Shades of Green,” so one can only imagine what kind of (hopefully) family-friendly floats we can expect. The parade starts at 3 p.m. at Baxter and Broadway and continues to Mid City Mall. Look out for the LEO Bus again this year … we’ve been practicing our waves. —Sara Havens

Hailed as a kind of shoegaze, psych-rock ensemble, Brooklyn band Heliotropes head to Louisville Saturday. You can safely throw stoner metal into the list of genre-specific descriptors that precede the band, as evidenced by the sludgy menace that leads Heliotropes to some well-earned Black Sabbath comparisons. Couple this with front woman Jessica Numsuwankijkul’s dreamy and lethargic voice, and Heliotropes proves to be more than just the sum total of their parts. Funded by a successful Kickstarter campaign, the band is touring in support of its impending full-length, The Constant Sea, to be released in the spring on Manimal Records. Joining them for this stop are Toronto rockers Belief, who bring their comparably lighter dream-pop as a counterbalance to the darker caverns Heliotropes mine. Opening is local indie band Gangly Youth. —Syd Bishop

Finding the heart behind math-rock — it’s been Minus the Bear’s ongoing mission through a dozen years and some oddly titled records. Last year’s full-length Infinity Overhead successfully delivered a balanced charge of precisely slicing electric guitar and countering synths that put multilayered oomph around the rhythm. These guys play with song structure as if it was a new language hidden between the lyric lines and among the arrangement choices. Their latest visit is a co-headlining gig in which this Seattle outfit will come on after opening trio Now, Now and before a closing set by Philadelphia’s Circa Survive. The latter act is at its own balancing point these days — Anthony Green and company extend the notes on their verses with the pure yearning of classic pop-rock, while the rumble underneath perfectly captures the energy that’s borne of their dissatisfactions. —T.E. Lyons

PYRO Gallery’s new space, while not particularly large, is big enough to showcase a first for them: two solo exhibitions by two artists at the same time. Ann Stewart Anderson’s show is “WOW: Wonderful Old Women.” Her paper mosaic portraits were “created from paper and images I cut from old art magazines,” she says. “In fact, if you look closely, you will see that (‘FLORA’s’) eyes were clipped from a drawing by Picasso.” Keith Auerbach says he has a “love of color, pattern, composition and ‘the word,’ especially metaphor and meaning.” All are in play in “The Next Call: LetterForms.” He started this series by scanning a page from a 1860s copy of “Les Miserables” from which he created abstract patterns. —Jo Anne Triplett

It’s hard enough for an artist to get one exhibition, but to have two shows at the same time in the same city is akin to capturing lightning in a bottle. Meet Matthew Ronay, lightning master. His installation “Mounting Toward Zenith/Descending And Disappearing” at the Kentucky Museum of Art and Craft represents his interpretation of the journey of human life. “Doing and making is where the real energy is transferred and transmuted, not in the interpretation of the thing made,” he says. “Selected Works: 2007-2010” at U of L (through March 31) features objects made of natural materials such as cotton, wood and leather. The opening reception is March 7 from 5-6:30 p.m. with a lecture to follow. A catalog of his work is available at both KMAC and U of L. —Jo Anne Triplett