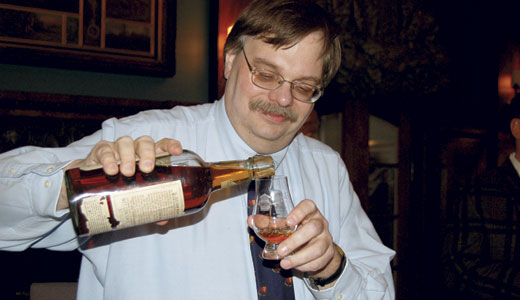 Michael Veach stands up from behind the stacks of books on the table and clinks a pocketknife against a snifter glass. A crowd of more than 50 abruptly ends their conversation and gathers around. It’s time to taste some whiskey that Veach has been holding onto for an occasion such as this — the launch of his book on the history of bourbon, “Kentucky Bourbon Whiskey: An American Heritage.” He digs the knife’s blade into the dry, worn cork of the bottle. His eyes are wide with anticipation, like a kid awaiting presents on Christmas morning. This is Old Crow whiskey that he believes was put into the barrel around 1912. It’s a pre-Prohibition relic, and he’s eager to share it with anyone brave enough to try it.

The flavor is musty and burns all the way down. There’s a strange flavor of clove that lingers. Veach swirls it around the glass, gives it a nose, and throws it back. He smiles, satisfied and wanting to dissect each and every flavor. But for now, it’s back to the table to sign books and shake hands with friends, co-workers and bourbon industry bigwigs.

Mike Veach is the associate curator of Special Collections at the Filson Historical Society. He’s also the leading bourbon historian in town — probably the only one. “I always tell people I’m the luckiest student to come out of the University of Louisville,” he says of the title. “It’s such an unplumbed field of history. I really hope the book inspires some future generations of bourbon historians to look into things even deeper.”

“Kentucky Bourbon Whiskey” is a concise look at how bourbon came to be, and it follows the spirit throughout significant moments in U.S. history, including the Whiskey Rebellion, the Industrial Revolution, Prohibition, WWII, a popularity surge in the ’50s followed by a decline in the late ’60s and ’70s, and how its future is shaping up. Veach stresses it’s not a comprehensive history, by any means, but rather an introductory course on the subject. “I didn’t want to scare people off,” he says. “I got my first review from Drinkhacker.com, and they said that if there was ever a Bourbon 101 class, this would be the textbook, and I agree with that.”

Veach has been researching bourbon for more than 20 years. After graduating with a master’s degree in medieval history with a secondary field of public history, he came to the Filson as an intern and got pulled into a paying project by United Distillers to archive papers and artifacts. He now teaches classes and seminars on the history of bourbon and runs the Filson Bourbon Academy a few times a year, attracting a wide range of pupils, from the curious imbiber to professional bartenders and future distillers. He also is on a first-name basis with most of the distillers in the state and is often pulled in on consulting projects.

Asked which came first — the love of bourbon or the love of history — Veach sits back and contemplates. “That’s a tough question. Being a Kentuckian, I’ve loved bourbon for a long time. But probably history, because I was always good at history, even in grade school.”

It’s a good time to be into bourbon. With the recent classic cocktail trend in bars across the country and Kentucky’s tourism push with the Kentucky Bourbon Trail and Urban Bourbon Trail, Veach stays busy. He’s part of a panel at this month’s Bourbon Classic and has committed to hosting seminars in San Francisco and Washington, D.C., this year. So what does he attribute bourbon’s popularity to today? “I think there’s a lot of different things that have brought bourbon back,” he says. “I think bourbon was coming back before the cocktail craze hit. I think mostly you were getting people who were drinking whiskey for the flavor, not just something you knock back. People started treating bourbon like they treat wine.”

So Kentucky must have the potential to be the Napa Valley of bourbon, right? Veach quickly answers no. “There’s too much of Kentucky that is still Bible Belt, that thinks anything to do with whiskey is evil. As a result, we have some of the most antiquated laws in the nation. The industry pays a lot of taxes in Kentucky, and it really hurts. We get half a million visitors a year already to the distilleries, and the potential is that we could do 10 times that.”

As for the future of bourbon, Veach believes it will be impacted by smaller craft-distiller operations, much like the beer industry. “I don’t know if it’s going to be the future, but it will have an impact on the future,” he says of specialty products like single-barreled bourbons. “Don’t get me wrong — Jim Beam white label will always continue doing what it’s doing. But for those who want a super premium product, the bigger distillers might pick up what some of the craft distillers are experimenting with.”

When asked to name his all-time favorite bourbon, Veach jokes it’s any that is free. “What are you buying me?” And although he thought the 1912 Old Crow he cracked open this evening was decent, he’s tried some doozies in his day. “We did an Old Rip Van Winkle bottle at the Filson back in 2002. This was a Van Winkle from Prohibition — not the stuff they’re bottling now,” he explains. “The best descriptor I heard that night was: ‘It tastes like the gauze a dentist puts in your mouth after they pull a tooth.’ Kind of a coppery/iodine/musty flavor. The funny thing is that I’ve had other Rip Van Winkle bourbons from that era, and they were really good. It goes to the fact that to keep the brand alive, they would put anybody’s whiskey in the bottle. I’m sure it was two different distilleries.”

The oldest bourbon he’s ever tried was a rye whiskey that went into the bottle in 1884, and he says it held up pretty well. And when not drinking bourbon, Veach prefers a decent beer. “I’ve always enjoyed a good glass of Guinness or a British ale. I enjoy some of the hoppy beers, although I don’t consider myself a hophead.”

As a man who is dedicated to history, Veach likes to keep it simple. He spends his days among the dusty books and artifacts at the Filson, and prefers you just drop by for conversation instead of email. In fact, he has never owned a cell phone and does not have cable TV. “People accuse me of being a Luddite,” he laughs. “My theory is: I like cell phones, and I think it’s really handy when I can get a hold of the plumber 24/7. I just don’t want the plumber to be able to get a hold of me 24/7.” And no cable? “I don’t have cable, because I refuse to pay money for something that’s going to rot your brain. To me, cable is the ultimate insanity. Give me $80 a month, and I’ll find something that’ll rot your brain that will be a lot more fun!”

Michael Veach will be signing copies of his book on April 25 at Vines & Canines and May 25 at Carmichael’s Bookstore. He’s also leading bourbon seminars April 16 at the Filson and May 15 at the St. Matthews library.