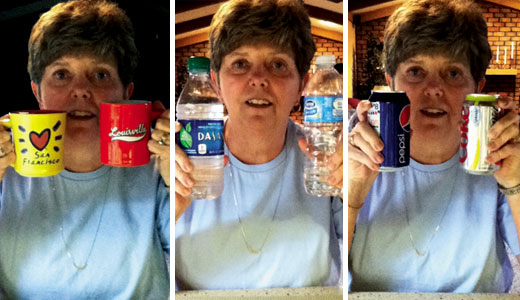 I turned my column over to my mother this week, hoping she could provide insight into to why I enjoy balancing beer bottles on my head. I didn’t realize she’d actually say yes … and then want to take over my space permanently. I’m letting my liver rest before March Madness bleeds into Derbytime, so eat it.
—The Bar Belle

Hi, I’m The Bar Belle’s mom and am writing this column with fear and under duress! Sara asked me to write her column for the “Fake Issue” of LEO. I immediately freaked out — told her to write it herself and sign my name, but she calmed me down, told me I could do this, and made me a concoction called a Long Island Iced Tea.

So here it goes: Sara is the middle child (between two brothers). Does that explain anything? She had an inner battle of wanting to be the center of attention but being painfully shy. She enjoyed being with adults and would win money from her uncle playing cards. (To this day, I’m not sure Sara realizes he let her win.)

She always loved to drink whatever was around — that should have been my first clue — pop, Kool-Aid, Tang, but never milk. She’d run home from school to snack on pretzels and cherry Kool-Aid, and she always ended up with a bright red, Kool-Aid-stained mustache. I made her a deal once that if she went a week without staining her upper lip, I’d buy her a Blizzard from Dairy Queen. I don’t think she even made it two days.

During her high school days, Sara was involved in everything. She enjoyed being a part of groups and planning different activities. Although she was interested in journalism, her first career choice was to be a dolphin trainer at Sea World. I really thought she might follow through with that, until she discovered how much science and math was involved in marine biology. So she quickly changed her focus to journalism. Much to the surprise of her dad and me, she was elected Class Clown of her graduating class. Her peers did not seem to be surprised at all. She was also voted Most Likely To Save the Planet, but I think that was a mistake. I can’t even get her to recycle.

At Ohio University, she continued being busy with writing (especially entertainment), and she discovered BEER! So now we have writing, entertainment and BEER — oh my. During one Halloween at OU (which are legendary, I hear), she dressed up as Michael Jackson. Believe me, I freaked out when I realized that my daughter could look like Michael Jackson!! Ask to see the pictures. It is very creepy.

After OU, fearing that she would not get a newspaper job, she went to bartending school and passed with flying colors. Now there’s a diploma every mother wants her daughter to have! But, within weeks (maybe days) of that, the LEO job came along. Writing about entertainment — it couldn’t get much better than that. She loved interviewing “famous” people (I often remind her that Debbie Gibson isn’t technically famous anymore) and even had a wall-of-fame in her early apartments.

Because journalists don’t make millions, she became a bartender at a Steelers (her brother’s team) bar, R Place Pub, and I guess I can say the rest is history.

She has come a long way, and her dad and I are very proud of her (that may change if she asks me to do this again). Once she started writing this column, we stopped receiving copies of LEO.

I hope this hasn’t been excruciatingly boring for you readers. Thank goodness Sara will edit this! Then again — maybe this is my calling. I’m retired. I think I could squeeze out a column a couple times a month. How hard can that be? Maybe I can strike a deal with the LEO editor to run my column instead of Sara’s for a while. Are you all getting tired of her nightlife shenanigans? I could write about my favorite Bible verses, or my love of NASCAR, possibly knitting 101? I don’t know about you, but I’ve heard all I need to about beer, bourbon and The Back Door.