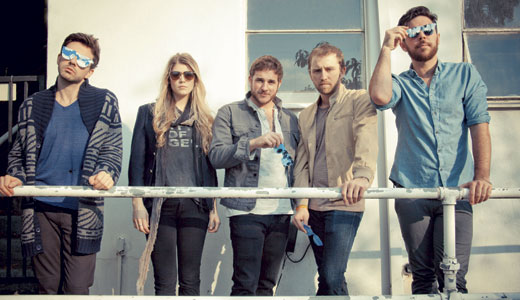 Robbie Arnett is one of the five members of Milo Greene, none of whom are named Milo or Greene. If you’re an NPR-listening, blog-reading music fan, you’ve probably heard the oft-told story of how they got their name (it was the name of a fictitious manager, used by band members trying to book shows while in previous bands, attempting to give the impression that they were more successful).

Milo Greene is a pop-rock band from Los Angeles that has shared not just booking duties but also songwriting and singing, and trades instruments throughout their sets. “I learned guitar first. Everything else, I try to make it up as I go,” Arnett says. “We take as many instruments as we can, learn really simple lines, little melodies, and then figure out how to play it live.”

Unlike some L.A. collectives, Milo Greene doesn’t exude a Manson family cult vibe — they come from the sunny part of town, near the beach, where folks are still young enough to try to succeed, where their dreams haven’t been totally dashed yet.

Living in what the band calls “Americalifornia” has also made it easier to perform on every TV talk show in town, though they have spent much of the past few years touring up and down the highways of the real America. It’s a life that appeals to him, says Arnett, much more than battling the legendary SoCal traffic snarls.

“It’s the way I’ve always lived. My family moved a lot when I was growing up, so it turned into something that feels natural to me — moving around hotels, a different city each night.”

Their travels will take them to Bonnaroo this June, offering a chance to check out both their youthful peers and older legends like Paul McCartney and Tom Petty. It might be the best way for an up-and-coming musician to make Dad proud.

“I was home recently with my dad, and we watched one of those behind-the-album documentaries on Netflix about Tom Petty … I’ve done some harsh music projects before, and this is the one that my dad is like, ‘Oh, I could get into this.’ That’s really cool to think that you can be up there with, like, (laughs) The Doobie Brothers.”

Have you considered that in 10 or 20 years, you might be somebody’s parents’ favorite band? “I hope,” laughs Arnett. “Yeah, that would be cool. It would be, like, the Eagles or us.”

Milo Greene has done well enough that their Louisville show was originally scheduled for Zanzabar but had to move to the larger Headliners to meet demand.

The real test might be the nerve-racking sophomore album, the expectations-raised sequel to the album they spent years preparing.

“We have time off in April, so we’re just starting to think about making new music, which is exciting for me. I’ve been living with these songs for almost four years now at this point.”

“It’ll be nice to get some new blood in there,” he says. “We love working with sounds, recording stuff, and we do it all ourselves. Being in a band with four songwriters is a challenge, but I think that’s a gift,” Arnett continues, describing their commonality as a shared love of lyrics and melody.

Still, Arnett’s not completely sick of their set just yet. “No, no, like I said, we learn instruments on the go, so I’m always challenged.”

You’re still learning how to play your own songs? “Exactly! ‘You want me to jump on this keyboard? Jump on this bass? It’s gonna take some time, but OK …’”

The band’s interest in movies — and marketing savvy — has led them to label their music “cinematic pop.” While the group’s future potential as film composers is still unknown, they have assembled a 40-minute film called “Moddison,” meant to coincide with their self-titled album, which was released last July. “I’m interested in (film scoring) … people have asked, we just haven’t had time to think about things. When you’re on the road, you kind of forget things like what time it is. You can’t focus on real things.”

“It’s not a bad thing,” Arnett concludes. “You’re just focused on things like traveling, and you get an hour each day to really be alive.”