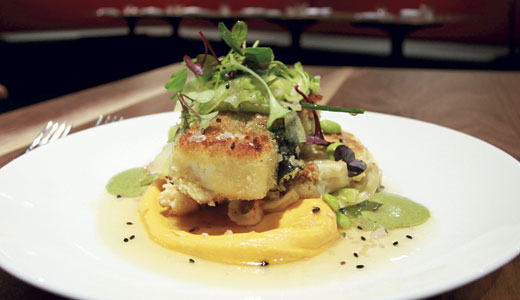 Chef Edward Lee’s insanely popular new restaurant MilkWood at Actors Theatre of Louisville reminds me more than a little of Chef David Chang’s acclaimed Momofuku Ssäm Bar and other Momofuku eateries in New York, Toronto and Sydney, but I think MilkWood has the potential to be even better.

Not only do these restaurants tap a similar creative vein, but Louisville’s Lee and New York’s Chang have even more in common. They’re in the same generation: Chang is 35, Lee 40. Both grew up in Korean-American families in New York City and both are passionate about creative cooking that’s rooted in their heritage but meets and mingles with international flavors.

Both are media chefs gaining a reputation beyond their towns. Lee nabbed a spot on “Top Chef” and beat the Iron Chef on “Iron Chef America”; he’s a finalist in the James Beard Foundation’s Best Chef Southeast category again this year. Chang has published celebrity-style cookbooks and is featured on Anthony Bourdain’s “Mind of a Chef” series on PBS. (In that role, by the way, Chang and Lee have met and shared sips of Pappy Van Winkle’s Kentucky nectar with Bourdain while the cameras rolled.)

MilkWood is no mere clone of Momofuku, though. Named after the Dylan Thomas play “Under Milkwood,” it has a personality all its own, and that personality is clearly defined by Lee’s inspiration and style.

For one thing, the space below the Actors Theatre’s lobby holds about 100 diners at maximum capacity, making it about six times larger than Chang’s intentionally tiny spots. And while Chang’s eateries are self-consciously downscale — simple noodle shops with not-so-simple fare — MilkWood is simply elegant and stylish, a character it shares with 610 Magnolia, where Lee has presided as co-owner and chef since 2003.

But when 25 of those diners line up on backless stools around MilkWood’s L-shaped bar, sampling what Lee calls “comfort bar food with an Asian pantry,” they might get a Momofuku-like vibe if they don’t look around and see a bunch more diners relaxing in comfortable booths and chairs at attractive butcher-block tables.

Lee suffered a spectacular fail with his last venture out from 610, the short-lived Potstickers on Baxter Avenue. A tiny venue in the Momofuku style, it lasted only a few months and apparently suffered because Lee’s inspiration wasn’t backed by Lee’s supervision. I don’t expect him to repeat that mistake: I’m told he’s giving both restaurants close attention and relying on trusted chefs in both kitchens: Kevin Ashworth at MilkWood, Nick Sullivan at 610.

MilkWood’s menu is all Lee but wouldn’t feel out of place at a Chang eatery. Focused on a mix of starters and small plates intended for grazing and sharing, it seamlessly merges American standards with Asian flavors and more than a hint of France. Eight starters range from $7 (for hot and sour soup or an Asian-accented fried chicken and waffle) to $10 (for a salad topped with crispy sweetbreads and pastrami). A dozen small plates (and a couple larger) are $11 or $12 (for organic pork or beef burgers on pretzel buns) to $28 (for a rib eye steak with lemongrass-habanero, Tarentaise cheese and fries).

An inventive bar program offers creative cocktails, a good mix of quality beers, and a short but exciting wine list fashioned by front-of-the-house guy Len Stevens, formerly of the late L&N Wine Bar, who’s put together a list of about 30 wines categorized not by color or region but style.

Perfectly prepared collard greens ($3) were kicked up with spicy kim-chi and bits of pork. Ginger-bourbon carrots ($4) were intensely flavored, roasted low and slow.

With wine and dark, rich Quills coffee, our small-plates feast added up to $95.40, with a $25 tip well earned by impeccable service from a friendly team of servers.

MilkWood is slammed before plays, especially with the Humana Festival of New American Plays under way through April 7. But if you can wait until a few minutes past show time, you’ll have plenty of space to spread out.