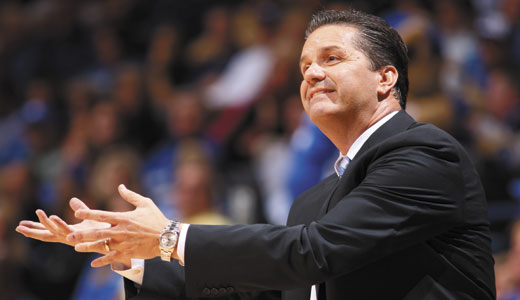 In 1970, Al McGuire and his Marquette Golden Eagles told the NCAA tournament selection committee to shove it and chose instead to play in the NIT. It was a curious decision, even then, which McGuire made because he didn’t particularly like the NCAA tournament draw his eighth-ranked Golden Eagles received. Marquette cruised, blasting Louisiana State in the semifinals en route to an NIT championship. The move forced the NCAA’s far-reaching hand, and the organization decreed that any team invited to the Big Dance must accept the bid or be prohibited from postseason play.

That was the last time anyone gave a shit about the NIT.

No sense deluding yourself into thinking otherwise — not that any sane person is considering that. (Though, mark my words: There will be a message board thread, somewhere in the ether, claiming just that, and people will start to agree, and it will be very sad and also scary.) The NIT is a carnival of also-rans, a sort of training ground for mediocre teams hoping to gain tournament experience and, hey, more missed class!

But Kentucky doesn’t fit that mold (except the mediocre part). There is no silver lining. This was a failed season.

When John Calipari first came to Kentucky, national pundits crowed about the one-and-done rule and how it was bad for college basketball. Players would just use Kentucky, they’d say. Play for a year, then go pro. It would ruin the college game because there would be no connection to the school.

Sure, they were entitled. Hell, ESPN broadcast their practices. It’s hard not to get caught up in it — these are 18-year-olds, after all — but when the chips were down, they folded. They lacked the edge of Calipari’s previous teams, the swagger, and, most damaging, the talent.

Of course, the source of Kentucky’s demise can be neatly traced back to Nerlens Noel trying too hard and shredding his knee in Gainesville. It was downhill from there, starting with a curb-stomping at Tennessee and culminating with an embarrassing loss to Vanderbilt.

But there were wins in between — over tournament teams Florida and Missouri — that made the losses more confounding.

And while there’s no sense in doling out blame, there is one question that begs an answer: Why can’t Archie Goodwin shoot the ball over the rim?

In a way, it’s the perfect metaphor for Kentucky’s season. So much promise, ability, and expectation — then, jeez, just shoot it a little higher. I mean, your name is ARCHie.

But yes, much of the malaise can certainly be attributed to the loss of Noel, clearly the team’s heart and soul. But the season wasn’t lost then, nor was it even dying. Through it all, Kentucky seemingly fought its way back, beat some good teams, and was tasked with defeating a bad team in an effective play-in game.

Everyone was saying all the right things; hell, it was a team riding the wave of a senior day win over a Top 10 opponent — it was hard not to feel like a corner was turned. But then, just as Archie receives the pass and you swell with hope as he steps into a three, the redeeming shot, the one that would turn the tide — it comes out of his hand like a goddamn soccer throw-in, clanging violently off the rim, and you chide yourself for ever believing there was a chance.

But this isn’t about Archie Goodwin, nor is it his fault. It’s no one’s fault, but, as a unit, Kentucky had a tendency to look disinterested at times. Sure, you could blame the point guard or the coach, but it was more of a collective display of temporary lassitude.

It was a group that could turn it on and off at a moment’s notice — though they could never figure out which switches go to what breakers. And that’s a problem.

The mental image here is precise: Calipari, in a dark basement, flipping switches and shouting, “Now? What about now? Is that it?” Meanwhile, the team is standing upstairs, just looking at each other, inanimate.

And as a result, Kentucky is in the NIT, and, still, nobody gives a shit.