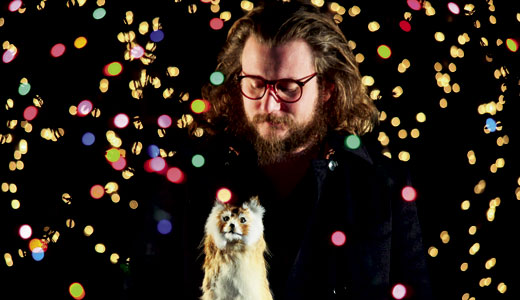 Houndmouth, the locally based Americana quartet who bolted to an international recording contract in less than six months, left Louisville in January for a series of dates supporting more established acts, such as Grace Potter and the Nocturnals, Lucero, Drive-By Truckers and Alabama Shakes.

“What the fuck’s wrong with Louisville all of a sudden?” asked Amanda Shoemaker of Old Louisville, whose blog Defending Louisville has been read by dozens since its launch in 2009. “What, you can’t keep playing at ZaZoo’s whenever I feel like seeing you there?”

Zanzabar regular Emmanuel Webster said, “Oh, are you still into them? I was over them before I even heard they would be mentioned on a blog. I’m more into bands that don’t even make music. Music’s so done.”

Drinking at Molly Malone’s, Joe Bizer declared himself to be “insulted” that Houndmouth had played in Paris, amongst other European cities, while on their recent tour. He cited “World War II” as his reason.

Last Friday night, before a noise-rock concert began at Lisa’s Oak Street Lounge at 12:45 a.m., a 30-ish couple at the bar was overheard discussing the problem. After the woman began by declaring that Houndmouth was “the worst piece of shit” she’d ever heard “since My Morning Jacket,” her male companion agreed and said he was only interested in bands featuring friends from high school.

A third concertgoer then interjected, “I saw on Instagram that Houndmouth had played a show in some place called Rotterdam last month? Is that even a real city? That sounds like a made-up name.”

Defending Louisville blogger Shoemaker, who lists her “all-time fav bands in the world” as Cabin and Jefferson Tarc Bus, recently wrote a passionate (though typo-filled) diatribe against The Beatles, Adele and other popular musicians from outside Louisville as being “an insult to the 502.”

She has also recently written posts about how much she hates New York, why Nashville residents are jealous of Louisville, how the TV series “Grey’s Anatomy” only uses songs after they are first played by WFPK, and how local restaurants are to credit for the resurgence of bacon’s popularity worldwide.

Jim James apologizes for ‘all that mystical bullshit’

In a candid moment of introspection, My Morning Jacket frontman Jim James has apologized to fans for “all that mystical bullshit.” The apology, which he posted on his blog, became a worldwide trending topic on Twitter, as millions of anguished fans confessed they really have no idea what most of James’ lyrics mean. It’s a sentiment the singer agreed with.

“I’m extremely proud of the music the guys and I have made, and I stand by our singing and our playing,” he wrote. “Like most singers, I quit paying attention to my lyrics long ago. When you sing a song 250 times a year, you tend to use your stage time for other things, like mentally making your grocery list or deciding what options you want in your new Escalade. But I recently listened back over my albums, and I frankly have no idea what I’m talking about. Except that Librarian song. That one makes sense. But the rest are, like, HUNNNH? I mean, seriously, on some of those songs I make Steely Dan read like Tom Waits.

“But that’s all over with. From now on, I’m going to be more plainspoken and down to earth. Because we all need to find the beauty in life, to admire that sublime tapestry that lets us channel each other’s energy and … oh, shit. There I go again. Sorry!"

Louisville-based heavy metal band Satan’s Journey has decided to change its genre to a rootsy bluegrass style known as “newgrass.”

“We’re really influenced by bands who were influenced by actual bluegrass artists,” said bassist Stig Thrasher, who is saving tip money from his restaurant job to buy a stand-up bass fiddle. “Old Crow Medicine Show, Mumford and Sons — those guys have been doing it so long, with such passion, and it’s really rubbed off on us.”

Asked what prompted the shift, lead singer and guitarist Von Mauler cited a complete lack of interest by local promoters. He says the band will rewrite some of its better known metal songs — such as “Baby Killer in Your Mind” and “Fuck You, Devil Fucker” — to fit its new style.

“The fans have spoken,” said Mauler. “The people know what they want. If that means we grow beards and wear John Deere T-shirts, so be it. Because the fact is, Forecastle keeps ignoring us, and you don’t get to open for the Avett Brothers if you’re playing Judas Priest covers.”