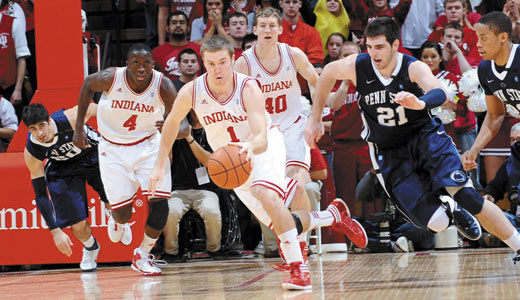 Indiana coach Tom Crean was all smiles and high fives as he danced off the United Center hardwood last Friday after IU demolished Illinois in the quarterfinal round of the Big Ten tournament in Chicago.

“I don’t think they stopped us the last seven minutes,” crowed Crean. “Just team basketball all the way.”

What’s helped Indiana from a year ago, when the Hoosiers knocked off No. 1 Kentucky in Bloomington and won two games in the NCAA tourney before being eliminated by eventual champ Kentucky, is the Hoosiers are no longer just a three-point shooting team that outscores opponents. Indiana was second in the country in threes in 2012, but further down the list this year with a more balanced attack. Plus, Indiana seems to be able to stop teams, too.

“That’s where they’re really improved, on defense, with their on-ball guarding,” says sportswriter J.D. Lewis, an IU grad with a sense of realism earned over the years at The Columbus (Ind.) Republic and The Courier-Journal. “They’re pretty quick, too. The freshman point guard Yogi Ferrell is a big addition.”

Indiana is stacked with stars, including the exciting Victor Oladipo. But its title hopes revolve around All-American center Cody Zeller, who keys Indiana’s fast break. Not only does the 6-11 Zeller ignite the break with his rebounding, but he runs and passes in the open court, and may finish flying to the basket — often accomplishing two of those three things in one fast break.

“The Big Boy from Washington,” says Lewis, referring to Zeller’s roots as the third of three Zeller brothers to roar out of Indiana high school powerhouse Washington (a town of 11,500 between Loogootee and Vincennes, for those who know something of basketball geography). All three were named Indiana Mr. Basketball. Luke starred at Notre Dame and Tyler at North Carolina. And many think Cody, the youngest, is not only the best, but about to do something Big.

“I told someone the other day, ‘You watch the Big Boy from Washington now,’” says Lewis. “He’s going to carry the team, and carry it a long way.”

Zeller does seem to have suppressed urges to forego shots in favor of passing to teammates. He knows he needs to drive Indiana’s racecar offense.

“I think it’s a transitional moment for an unselfish player,” says Indiana assistant coach Tim Buckley, “to realize you have to take a leading role in order for your team to be successful.”

Then on Saturday, Indiana laid an egg and was erased from the Big Ten tournament by Wisconsin. The Hoosiers couldn’t score and couldn’t stop Wisconsin from scoring. And it seemed like Indiana didn’t get a rebound in the last 10 minutes. Wisconsin’s tall pines swept the glass. Worse, it seemed the Indiana players got together and decided the only play they would try in the final minutes was to get the ball to guard Jordan Hulls to shoot a three-pointer. But Hulls was nearly blanked shooting threes. He might have finally hit one on the way out to the parking lot, where a bus was waiting to haul the stunned Hoosiers back to Bloomington.

Back in Bloomington, Crean cancelled his hair appointment with Igor of Indy and whipped Indiana through some serious drills in preparation for the tourney. NCAA rules prohibit teams from practicing around the clock, but Crean borrowed a page from the Indiana legislature and stopped the clock at one minute to midnight, with practice continuing.

On Sunday night, Indiana (27-5) was awarded a No. 1 seed in the NCAA East Regional and opens play Friday in Dayton against the winner of a play-in game between Long Island and James Madison. The East bracket looks doable, with everybody talking about Miami, the No. 2 seed that won the Atlantic Coast Conference.

Indiana is seeking its sixth NCAA championship, with previous crowns coming in 1940, ’53, ’76, ’81 and ’87. Lewis is hoping the Hoosiers don’t let an opponent jar them from their quest.

“The teams that beat them – Wisconsin, Butler, Ohio State — basically hit them in the nose and they didn’t react,” Lewis says. “But if they can rebound with people, they’ll be tough to beat.”