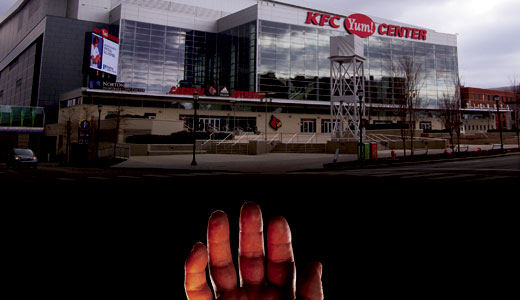 Members of the Louisville Arena Authority and the Kentucky State Fair Board actively worked to conceal a portal to Hell beneath the underground parking garage of the KFC Yum! Center, according to an open records request.

Documents obtained from the Arena Authority and the Fair Board reveal that, before and during construction of the nearly $500 million arena, financial planners and elected officials repeatedly ignored warnings from contractors, accountants and deacons from the Archdiocese of Louisville that the structure would “cause unmitigated havoc on the material plane” and herald “a financial, gore-soaked apocalypse.” The warnings were not heeded, despite the disappearances of several construction workers and other disturbances.

The documents paint a picture of blind optimism on the part of the Arena Authority and the Fair Board in the face of certain fiscal ruin and the appearance of a gaping, horn-lined opening into a sulfurous realm of never-ending torment in the center’s lower parking garage.

“The anomaly has a taste for human blood,” authority chairman Jim Host wrote in a Dec. 10, 2010, memo. “It’s already consumed six workers and regurgitated their bodies as a shambling, re-animated mass. Otherwise, we’re still on track. Everything’s a go!”

A March 20, 2009, letter from Goldman Sachs account executive Peter Gorman to former Fair Board CEO Harold Workman revealed that the investment bank was “quite accustomed” to massaging the numbers of a tax increment-financing deal to make it seem less obviously onerous for taxpayers, but the investment bank had little advice for “dealing with vampiric magma golems.”

“However, in lieu of these phenomena, our actuaries cannot account for any unforeseen consequences wherein the denizens of Hell should emerge from the portal with a thirst for manflesh,” wrote Gorman. “Have you tried plugging the hole with lots of taxpayer money? That’s typically what we do.”

And that’s exactly what Host did, according to the documents. An expenditure analysis shows that approximately 40 percent of the Fair Board’s budget for the first two years of the Yum! Center’s operations was spent under “Miscellaneous Services & Money Bricks For The Evil Hole.”

According to the documents, the recent discovery of the Hellmouth occurred shortly after the so-called “LG&E” site on West Main Street — where a former Humana office building once stood — was chosen in 2006.

Freelance commercial geologist Geoff Rearden was dispatched early in the construction process to take core samples of the site in late 2006. According to what remains of Rearden’s notes, he suspected the portal to be a mere “sinkhole, potential sewer hazard.” He set up his pile driver over the mouth when it suddenly opened, coughing a column of bile into his face.

“It was like a dream,” Rearden said, giggling, in a telephone interview from his cell at Pescadero State Hospital. “Their voices, their beautiful voices, saying, ‘Feed us, Geoff. We’re so hungry. Won’t you feed us?!’ My god, I fed them. I fed them!”

Rearden was found an hour later, frothing at the mouth and unconscious, his right arm severed at the elbow.

Within hours, Greg Hovus, site manager for PC Sports, sent a letter to Host explaining what had happened.

“How unfortunate,” wrote Host in an Oct. 4 email to PC Sports, the Fair Board and the Arena Authority. “We knew in advance that there would be some ‘pitfalls,’ maybe an occasional vampiric magma golem, perhaps an occasional instance of zombification or ritual disembowelment, but, in the grand scheme of things, we must remain confident that this arena will bring only good things to the city, and not 1,000 years of darkness as foretold by the Necronomicon.”

But this email contradicts Host’s more recent comments. During a June 20, 2012, appearance on “The Mandy Connell Show,” the arena booster responded to charges of demonically induced cannibalism during a preseason Cardinals basketball scrimmage.

“They’re just so excited about the arena!” Host gleamed. “Now, obviously we could have never foreseen, with the aid of a forbidden tome or not, that (the Yum! Center) was built atop a malevolent vortex of untold pain and carnage. Nobody can predict these kinds of things, Mandy. Not even God.”

Other documents offer a glimpse into the bond between the Hellmouth and Host, who often referred to the portal as “Yummy” in subsequent memos. For example, in the minutes of an August 2010 meeting of the Fair Board and the Arena Authority, the stenographer made note of Host’s disengagement from the process, pointing out that his only comment dealt with the “sweet sound” of crying children.

As the Yum! Center’s dire financial picture becomes ever clearer, and its thirst for souls grows exponentially larger than the authority’s ability to book rock concerts teeming with nubile flesh, the voices of those city leaders who defied Host’s conventional wisdom are, as the body count rises, less marginalized in mainstream civic discourse.

“We’ve always known about (the Hellmouth),” says local historian and Metro Councilman Tom Owen, D-8. “Humana had summoned (the Hellmouth) long ago to appease the Old Ones, satiating their unquenchable thirst with a never-ending stream of sadness and human grief. For a good, long while, a balance was achieved. But when that building was destroyed to make way for the arena, the Old Ones were cut off from that delicious pool of suffering.

“In time, their appetite would only grow stronger, more profane,” Owen said, his left eye twitching. “Myself and my colleagues in the Metro Council knew it would only be a matter of time before we would have to … to … feed it, just once more.”

Owen says it was this blood oath to the Hellmouth that forced the council’s hand in approving the initial financing deal.

“The pen Mayor Fischer used to sign that damn resolution was filled with an infant’s blood,” Owen said, crying hysterically. “Host filled it himself, man! I fucking saw it! Oh my god, I fucking saw him fill that pen with a baby’s blood!”

State Rep. Jim Wayne, D-Louisville, was an early opponent of the arena’s flim-flam financing. He says that people like Host were too willing to drink the Kool-Aid, and that their exuberance allowed them to ignore problems with the TIF and the vampire armies that now roam East Main Street.

“Jim Host is polished, he’s a very good salesman, and he probably believed it,” Wayne says. “Regardless, we all drank the Kool-Aid, or at least most of us did. At least, figuratively. Some of those cups were filled with human blood.