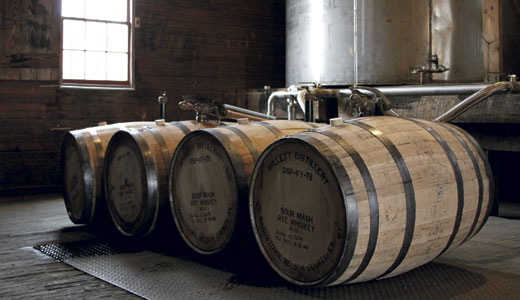 Sometimes,” wrote Mark Twain, “too much to drink is never enough.”

A rumored aficionado of the Frankfort-produced Old Crow Reserve, Twain would likely be unsurprised, some two centuries later, to discover that bourbon whiskey — which he called “the true pioneer of civilization” — has not only cultivated an insatiable global thirst, but has in recent years driven local and state economic development efforts to turn the Bluegrass State into the Napa Valley of the South, one tumbler at a time.

With the emergence of bourbon tourism and increasing foreign market penetration, industry evangelists say that interest in and consumption of Kentucky’s native spirit have reached levels not seen since the Prohibition Era, when Bluegrass bootleggers helped spread the amber elixir to speakeasies across the country.

Indeed, Twain would have a good laugh at the efforts of elected officials in this dry-county dominated state scrambling to create economic incentives for bourbon. But things have come a long way since the 1850s. The advent of bourbon tourism — including the Kentucky Bourbon Trail as well as the more recent, Louisville-centric Urban Bourbon Trail — and booming overseas success have turned the spirit into a point of civic and economic pride.

“It’s a great time to be in the bourbon business,” says Eric Gregory, president of the Kentucky Distillers Association. Take 2012, for example: According to figures released by the Distilled Spirits Council, the sale of bourbon and Tennessee whiskey rose 5.2 percent over the previous year to nearly 17 million cases, commanding $2.2 billion in revenues and witnessing the introduction of almost 50 new bourbons into a global marketplace of 126 countries.

On the export side, total distilled spirit exports for the United States in 2012 was $1.5 billion, with bourbon and Tennessee whiskey comprising $700 million of that figure, according to the KDA.

But as distillers struggle to meet the ever-increasing demands of a world teeming with budding bourbon aficionados (watered-down Maker’s, anyone?), they face no small amount of red tape at home. A slew of antiquated taxes, laws and other regulations, industry players believe, are hampering the appeal of bourbon tourism as well as contributing to bourbon’s distinction as the highest taxed spirit in America, if not the world.

If you live in Kentucky, bourbon isn’t exactly a poor man’s drink. That’s because, before one drop even touches your lips, it has already been taxed a total of seven times. There’s a local ad valorem (Latin for “according to value”) tax, calculated on municipal property tax rates; a state ad valorem tax, which at 5 cents per every $100 of distillery property value generated $1.7 billion for Kentucky last year; a case tax; state and federal excise taxes; a state wholesale tax; and, finally, a 6 percent state sales tax that primarily hits retailers.

So it’s not surprising to learn that the industry has been lobbying Frankfort for some kind of relief from the tax collector. In a display that bipartisanship can and does actually exist, House Bill 276, filed by state Reps. Terry Mills, D-24, and David Floyd, R-50, would alleviate the ad valorem tax burden on distilleries by granting them matching corporate tax credits for the specific purpose of reinvesting capital back into their facilities.

“If you have a bottle of 18-year-old whiskey, one of the reasons the price is pretty high is that it’s been taxed 18 times,” Gregory says. “Scotch whiskey doesn’t pay such a tax, neither does Japanese whiskey or Canadian whiskey. Nobody else pays that. It generates about $14 million in revenue each year, and the overwhelming majority of that money goes back to local districts to fund critical programs like education, libraries, health departments, public safety, things like that.

“So as we studied how to get relief from this issue over the years,” he continues, “one thing that’s consistent is we want to make sure these local communities remain whole. Our distilleries have been entrenched in their communities for over 200 years, and we’re not going to do anything to harm education, police departments or anything like that.”

To hear Gregory and others explain it, the communities surrounding the distilleries are just as important as the distilleries themselves because they foster the sense of place that has helped make bourbon tourism into a hot commodity for cities and counties lucky enough to host a distillery.

Nowhere is this more self-evident than in Louisville, where in the last five years, the so-called Urban Bourbon Trail has incorporated more than two dozen local bars and restaurants into a major tourism coup, garnering the support of the local chamber of commerce, Greater Louisville Inc., as well as the Downtown Development Corp., which in November hired the Indianapolis-based planning and design company Rundell Ernstberger Associates to create a bourbon-themed streetscape in downtown Louisville.

Hell, even Congress has gotten in on the game. In 1964, the highest legislative body in the land declared bourbon a native spirit, making it to America what scotch is to Scotland. And as recently as 2007, former U.S. Sen. Jim Bunning of Kentucky displayed what may be one of the few shining examples of legislative acumen in his bizarre twilight years, helping to pass a resolution that declared September National Bourbon Heritage Month.

“In 2008, we looked at what we did have, and with a lot of help from ad agencies and things, it was like a light went off,” says Stacey Shepherd Yates, vice president of marketing and communications for the Louisville Convention and Visitors Bureau. “We have these wonderful bars and restaurants that are celebrating a bourbon lifestyle and heritage, some have over 150 bourbons on their bar, and a lot of them are cooking with it. So why don’t we market that and call that something? We already had an organic product, and we just put a name to it. That’s how the Urban Bourbon Trail was born.”

Within less than five years, the number of bars and restaurants participating in the Urban Bourbon Trail went from nine in its first year to 27 in 2013, Yates says, adding that the city is pushing to open up more craft distilleries — the equivalent of microbreweries in the beer kingdom — in downtown Louisville.

The urban trail is predated nearly a decade by the Kentucky Bourbon Trail, which officially got its start when, in 1999, the Kentucky Distillers Association and an increasing number of distilleries began offering tours of their facilities to the public. In those dark ages of the Internet, Yates says the biggest logistical challenge was providing directions to visitors woefully unfamiliar with the back roads of Kentucky. As time went on and Google became a verb, the questions asked by a curious public morphed from “What’s a bourbon trail?” and “What are your hours?” to the more practical “Where’s the nicest hotel in Woodford County?” and “Where can I shop?”

The spike in bourbon-related tourism prompted the KDA to make “president” of the Kentucky Bourbon Trail into a full-time position.

“Last year, we cracked 500,000 total visitors, something we’re very proud of,” says Adam Johnson, president of the Kentucky Bourbon Trail. “Our passport program — which is, when you go to all seven of our distilleries you get stamped on this little passport and then we send you a free shirt — we set a new record with that, with 18,000 completing that last year. In 2010, it was 9,000 people, so we’ve doubled it in two years.”

According to a 2012 University of Louisville study, for every person that completes the Kentucky Bourbon Trail, they spend an average of $737. The report also revealed that the industry employs roughly 3,100 people with an annual average payroll of $246 million and generates $2 billion in gross state product each year.

Despite the gains in popularity and revenue, roadblocks remain. Chief among them is the prohibition of alcohol on Election Day during poll hours, which Johnson says confuses a great many of the Urban Bourbon Trail’s international patrons. South Carolina is the only other state to ban alcohol sales on Election Day.

“People who are coming here, we get a lot of feedback from people who have flown from Australia or Germany and then they find out that on a Tuesday they can’t taste on their tour,” Johnson says. “And some of the distilleries just close, and some people cannot understand that. It really affects the tourism side of things.”

Aside from the ad valorem tax and Election Day laws, another issue of concern is sampling laws, which make tasting events at venues like hotels a dicey legal affair and which became a point of contention in Frankfort in 2010, as legislators including state Sen. Perry Clark, D-Louisville, fought to allow free samples at hotels during the Alltech FEI World Equestrian Games.

Neither issue is expected to gain much traction during this year’s General Assembly, although KDA’s Eric Gregory hopes the tax concerns will be addressed during a future special session.

On the congressional front, U.S. Rep. John Yarmuth, D-Louisville, founder of Congress’ Bourbon Caucus, says there’s not much to be concerned about in the way of threats to bourbon’s impending global domination — not yet, at any rate.

“We haven’t gotten to the point where we’ve had to get active on a legislative basis,” Yarmuth says. “We’re very vigilant about one particular issue that affects the bourbon business and the distillers, and that’s LIFO accounting,” which stands for “last in, first out” and refers to the current method of federal taxation for bourbon distillers, whereby manufacturers pay tax on the last bottle sold rather than the first bottle of a batch that could take years to age and thus incur inflated tax costs.

“(LIFO) has not been tampered with,” Yarmuth says. “I’m sure the president will put it in his budget again this year. It’s obviously a pool of money that’s sitting there that they’d like to get their hands on, in terms of finding some revenue.”

As bourbon booms at home and abroad, Yarmuth says a looming threat to bourbon’s hegemony could come in the form of “pirated bourbon,” which could undermine the image of the spirit across the globe and trickle down to taint bourbon tourism in our backyard.

“Basically, you can make generic alcohol and flavor it in a way that makes it like counterfeit bourbon,” Yarmuth says. “I know the distilleries are very much concerned about that. There are some places you can do that offshore, places in the Caribbean where they essentially have a tax haven and make what is essentially grain alcohol, flavor it … and make a competitive product that is significantly less expensive.”

But Yarmuth notes that such pirate swill is prohibited by law from being called bourbon (a protection afforded, in part, by language in the North American Free Trade Agreement), is not aged in a charred oak barrel, and involves “a lot of cheating.”

The congressman was less than forthcoming when asked to name his favorite bourbon but noted that he’s excited by all of the new craft distilleries and small batches emerging.

“There’s one that interests me, and it’s only in D.C.,” he says. “But it’s a Kentucky bourbon, and they buy it from a distiller in Bardstown … they bring it back to D.C. and age it in a different kind of cask, re-age for a while, and it’s bottled and sold as Filibuster Bourbon. I think it’s supposed to make you chatter more.”