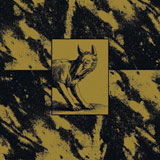 Exhibiting an onslaught of displeasure, Gold is as complete as a post-punk record gets while working with such firm intensity and soft, yet duly discordant, melodies. While providing as much power and chutzpah as one of their live shows, Anwar Sadat conceived an 8-track theme that reflects the endless struggle for the last bit of life on a rotting planet. After defeating its preceding emotive ambivalence, the album comes to an ultimatum in the last track, “Imperium” (runner-up to the set’s highlight, “Gold”), where bassist/vocalist Shane Wesley alleges, It’s not enough to live, and it’s not enough to die. As Anwar Sadat’s third release, Gold is a deft thrasher that will leave you feeling as if there are only two entities in this world: a man and his shadow.