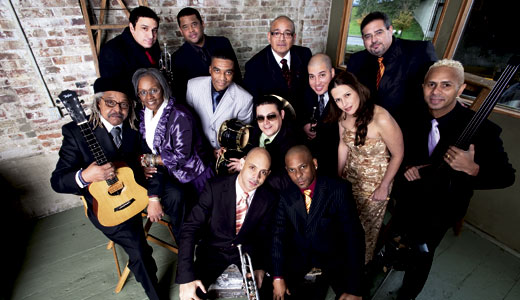 Afro-Cuban music might better be thought of as a spectrum of styles rather than a single style. Some of the music might sound more like folk music to our ears. Other styles are more akin to our big band jazz, albeit with rhythmic variations. Dizzy Gillespie is widely credited with helping to introduce Afro-Cuban rhythms to American jazz audiences in the 1940s, working together with artists such as Machito and Chano Pozo. Some seven decades later, the swaying pulses have found their way into all sorts of popular music. Nonetheless, the roots remain strong, and artists continue to mine its depths, keeping the heritage alive.

Earlier this season, the Clifton Center presented one aspect of Afro-Cuban music in a sort of chamber jazz concert with saxophonist Jane Bunnett, pianist Hilario Durán and the legendary conguero Candido Camero. With its presentation of the full, 15-piece band sound of the Afro-Cuban All Stars, the Clifton Center will offer another perspective on this rich musical heritage.

Juan de Marcos, leader of the Afro-Cuban All Stars, is one of the great champions of Afro-Cuban music today. He was a prime mover in the well-known documentary film and album “Buena Vista Social Club.” Since 1997, he has toured and recorded with an evolving lineup of players in a mission to not only preserve the music he loves, but to move it forward. He spoke to LEO shortly before a concert in Tarrytown, N.Y.

“The audiences are very warm, very good,” de Marcos says. “Normally, we sell out the venues. The people enjoy the Cuban music, and the response of the audience is great. The people understand the message, and they understand that the message of the performance is real. Audiences appreciate that it is a piece of your identity and of your culture.”

While the origins of the band were such that several strains of music were part of the repertoire, de Marcos says that today, “We play more the sound of the ’60s known as sonora.” He describes the makeup of the current ensemble: “We play with three trumpets, Afro-Cuban percussion, piano, bass, and we also use the keyboard for the sound of the vibraphone, since the vibraphone is difficult to travel with. On top of the three trumpets, we are using the bass clarinet, which gives a warmer sound live than the saxophone. It’s a combination of different styles, from the very traditional to the more contemporary Cuban music. I play the Cuban guitar, the tres, and that’s the lineup of the band.” Additionally, there are three vocalists.

“We play classics, of course, but there is a lot of new material,” de Marcos adds. There are elements of jazz, but sometimes with different accents than jazz audiences might expect, such as accenting the fourth beat of the bars.

Some might think of this type of hot Latin music as salsa. However, as the legendary Tito Puente said, salsa is a condiment — it does not exist as a musical genre. de Marcos shares that view, saying the term was coined for commercial purposes, and insists that the All Stars play Afro-Cuban music. He mentions some of the styles that make up this music, including mambo, chachacha and danzón. He reaches out not just to people of his generation who may have grown up with the music, but to all generations.

“There are lots of kids dancing at the concerts,” he says, adding that the band has even incorporated hip-hop. “There is a style we call Afro-Cuban funk, which we are going to perform as well. It’s a kind of funky vibe with a foundation of the Afro-Cuban music, the sound of the drums which are played in an African style, but the brass is like the funk of Earth, Wind & Fire or Kool and the Gang.”