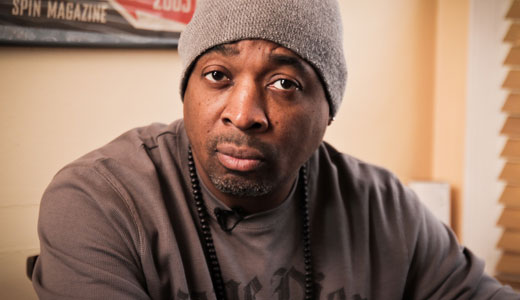 Rapper Chuck D is featured in the film

In case you haven’t guessed from the title, the new documentary “Let Fury Have the Hour” is intended to provoke. With rousing speeches and a raucous, music-video style, “Fury” will raise gooseflesh with like-minded viewers while raising hackles for those who can’t fathom why anyone would want to say unkind things about Ronald Reagan.

The film is at its strongest when it hits on its key thesis: the correlation between the “creative response” of 1980s punk, hip-hop and graffiti culture and Reagan/Margaret Thatcher-era policies. The filmmakers contend that the individualism promoted by the U.S. president and British prime minister drove massive wedges between nations and the world’s citizens. “We believe everyone has the right to be unequal,” Thatcher declares early in the film. The artists of that period, on the other hand, worked to erase this insularity and urged on unity.

“Fury” makes its case with distressed TV clip collages reminiscent of anarcho-punk visual artist Gee Vaucher and through thoughtful sound bites from those who lived and breathed the culture: Chuck D. of Public Enemy and Ian MacKaye of Fugazi, for example.

Unfortunately, “Fury” can be guilty of wandering off of its central point, sometimes sprawling into territories that, while compelling, dilute some of the film’s power.

Director Antonino D’Ambrosio can delve too often into a myriad of “what-fors” from environmentalists, labor advocates, skate boarders, graffiti artists, “Vagina Monologists,” Pakistani-American reggae musicians, Brooklynite Afrobeat musicians, Lower East Side Gypsy punk musicians and South Madridian cholo rappers, to name just a few. He includes contributors who look a tad out of place; comedian Lewis Black and musicians Jesse Malin and Sean Hayes can make “Fury” feel as though the director turned his lens on anyone from the left willing to speak on the subject.

A modicum of counterpoint could have bolstered the message of “Fury.” Hearing from someone with the Parents Music Resource Center or one of the anti-National Endowment for the Arts crowd that were so vocal and plentiful in the era would have been both topical and enlightening. Instead, “Fury” becomes a five-minute skateboarding movie, then a five-minute movie on how much we all loved The Clash, followed by strings of earnest but occasionally lengthy performance pieces that include poems, raps, ditties, even an excerpt from John Sayles’ brilliant 1987 film “Matewan.”

For all of its cultural sprawl, “Fury” does a fine job of illustrating the anthropology connecting punk, hip-hop, skateboarding and street art to politics. “This is the business of civilization building,” says Wayne Kramer of the MC5, one of the seminal punk bands. The film can serve as an excellent primer for those raised in the post-’80s who desire a better understanding of our cultural timeline.

For those, like myself, who were born a bit earlier, “Fury” celebrates a period in our own lifetimes where great art flourished and makes for a rad little shred down skate-park lane.