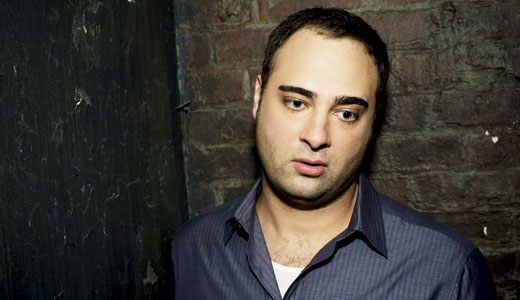 A regular on Comedy Central’s “Ugly Americans” and a contributing writer for the classic series “Chappelle’s Show,” Kurt Metzger is quite possibly one of the funniest guys on the planet. The recovering Jehovah’s Witness released an album, Kurt Metzger Talks to Young People About Sex, in 2011 and will be performing this week at The Bard’s Town. He took a moment out of his increasingly busy schedule to speak with us.

LEO: Who were some of your influences?
Kurt Metzger: When I was 12, I used to love, like, The Amazing Jonathan and Jeff Dunham. When he went to that fuckin’ jalapeño, God, did I love that. But then I watched a lot of Comedy Central in college, and I loved the guys that were on “Dr. Katz.” And then when I got to New York, about two years in, it was Dave Attel and Patrice O’Neal.

LEO: Even Jeff Dunham and The Amazing Jonathan seem a bit much for a Jehovah’s Witness. I would’ve thought you were more quarantined from the secular world than that.
NM: Oh, those were the guys I could watch. I wasn’t watching “Eddie Murphy Raw” or anything like that. Even later on, watching stuff like that, I was like, “What is all this cursing?”

LEO: Maybe it’s ignorance, but I would’ve thought you were further separated from all things secular.
NM: I was cut off from a lot of it, but not all of it; you were supposed to be a part of the world, but I could never join the military. You can’t be a Christian and go to war; I don’t know why people think you can … but it’s pretty fuckin’ clear that Christians don’t go to war. But people think it’s fine to drop a bomb on living, breathing people …Why? Because it’s fuckin’ America? People are stupid.

LEO: So what was it that made you leave the church?
NM: I don’t believe in the fucking Bible, that’s why. People don’t understand, things like evolution — they can co-exist. Evolution is the origin of species … not the origin of life. One doesn’t have anything to do with the other. It could be God, but it could be something completely else. And I’m one of those people; for a long time I believed a fuckin’ talking snake made more sense than that a monkey turned into a man. I honestly thought the talking snake was more plausible than evolution.

LEO: Not to change subjects, but you worked on “Chappelle’s Show.” What was that like?
NM: It was pretty easy. I worked from home, it wasn’t like a desk job or anything. I wasn’t working, I was behind on rent, and I knew (co-creator) Neal Brennan from doing comedy in New York, and he said to send him some ideas. They liked three of them and bought ’em. They were cool, they even wired me money to pay my back rent while I was waiting on the check. I was, like, “I’ll never go hungry again!” But then I didn’t work for another three years.