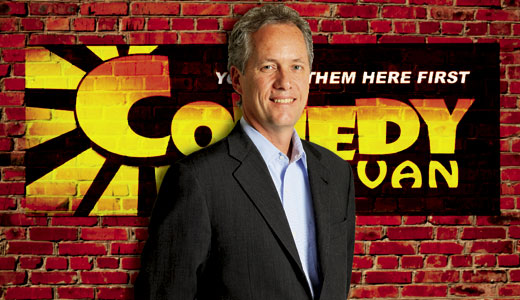 At a press conference last Friday in front of Comedy Caravan, Mayor Greg Fischer announced plans to put his knack for awkward, deadpan humor to use by becoming Louisville’s next occasionally funny comedian.

“I was talking to a senior adviser the other day about taxation, urban renewal and other important but boring stuff, and I mentioned in a cutting remark, ‘So-and-so’s got more cracks in his constituency than the Sherman Minton Bridge,’” Fischer proudly recounted for a gaggle of unamused reporters. “And I thought, ‘Hell-o, I think I’ve got another gift to share with the people.’”

While Fischer acknowledged such a hobby might prove distracting for a lesser comedian, potentially taking important time away from more pressing civic needs, he insisted he won’t need to practice the craft much, calling himself “naturally funny.” In addition, Fischer cited years of public speaking experience, as well as having to deal with “an increasingly hostile blogosphere,” as good preparation for this new hilarious venture.

When a reporter asked for an example of something funny he’s recently said or done, Fischer recounted this gem: “Why, just the other day, I got an email from a Shively resident named Hugh Janus. He was asking me why we couldn’t send him a second recycling bin. I wrote him back and said, ‘Hugh, why don’t you just recycle the first one?’”

When the assembled group failed to laugh at this joke, Fischer tapped loudly on his microphone and leaned forward. “Is this thing on?”

He then added, “Testes, testes, one-two-three,” laughing awkwardly at his crude pun.

“No, but seriously, I feel that laughter is a gift from God, like ganja. When I was trying to make SerVend successful, I had a sales manager who would always say, ‘We’re going to crush the competition!’ We never got tired of that one.”

Asked to explain why that was funny, Fischer explained that SerVend was an automated ice and beverage dispenser, and that the comment was humorous because people often crushed ice.

“Look, you might not find that as funny out of context,” Fischer said, “but don’t shoot me, I’m just the messenger. Like Bob Marley used to sing, ‘I shot the sheriff, but I also laughed at some pretty funny stuff.’”

Mayor Greg Fischer will perform his first official stand-up routine — a combination of puns, PG-rated mom jokes and very amateur ventriloquy — at noon on Thursday, April 4, in the Mayor’s Gallery at Metro Hall. The performance is free and open to the brave and/or masochistic.