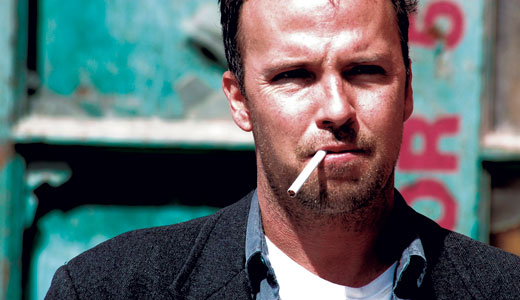 Doug Stanhope is the crown prince of comedy darkness. He’s the Edgar Allen Poe of stand-up. And if you don’t know what you’re in for with him, his show at Comedy Caravan might not be the place for you on that particular evening. Check YouTube first … trust me. But he took time out of his busy party-planning schedule to talk to LEO.

LEO: What’s up?
Doug Stanhope: Trying not to host a party.

LEO Trying not to host a party?
DS: Our friend is turning 50, and she wanted to throw a party at our place because it’s designed for tripping. She’s an artist who also knows everyone in town, so I’m trying to get drunk enough to socialize with people. So that’s what I’m doing right now … hiding around the corner from people.

LEO Well, I’ll try and get through this so you can get back to your party.
DS: Oh, no! I was so glad to have this scheduled so I could hide away until I was drunk enough to talk to people … which is exactly what I do on stage. The thought of doing stand-up comedy sober is literally terrifying.

LEO It does seem like sex, drugs and booze have always been a big part of your process.
DS: Well, except for the sex and the drugs part. The sex, I could care less about. And the only drugs I enjoy are the things you don’t find on the road, and if you do, you don’t have time to do them. I don’t have 10 hours, generally, to trip my balls off and get to the next town.

LEO: So being on the road makes you more responsible?
DS: Yeah — and it’s the people you do drugs with. You don’t find 46-year-old people who party like that … you find 22-year-olds, and you have nothing to say to ’em.

LEO Do you have any memories of Louisville?
DS: I will when I get there and people remind me. I wanna write an autobiography just of a year on the road and all the shit I forgot until I get to that town, and they’re, like, “Remember, then the cops drug us out of the hotel …” And I’m, like, “… Oh, yeah, I forgot all about that, that was here!” It’s weird because I have a strange memory a lot of times in that I’ll forget things I did when I was drunk … until I’m drunk again. I’ve been sitting with a guy at a bar for hours, and then when I start to get liquored up, I realize I know him. I met him last year when I was here and we were hammered.

LEO In the ’80s, all comics seemed to have their obligatory John Fox story. You kinda seem to be the John Fox of a new generation.
DS: I wrote a (blog post) once after meeting him. I’d met him before, but this was when he was really losing his shit. It’s a long story, he was a major embarrassment — the details are too long, but you can probably find it on my site. Anyway, I titled it “Ghosts of Christmas Future.” How long before I’m that guy?