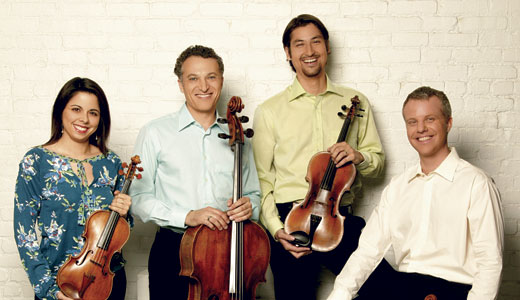 The Pacifica Quartet appears Sunday at Comstock Hall at U of L in the fourth of five concerts that mark the 75th anniversary year of the Louisville Chamber Music Society. In a traditional mode, the ensemble performs a Beethoven quartet and one by Ravel. But the spotlight of the show falls on a contemporary quintet called “Tableux Funebres” by Claude Baker — a special piece written and performed for the 50th-year celebration of the Chamber Music Society in 1988. Pianist Ursula Oppens joins the quartet for a starring role — and she’ll be busy.

“The most interesting aspect of the piece is it calls upon the pianist to do all kinds of special techniques inside the piano,” says Acton Ostling, the society’s programming director. “So it really takes someone adept at contemporary techniques, and of course Ursula Oppens is a specialist at that.

“Some of it is striking strings, some of it is plucking, and that’s inside the piano, as well as using the keyboard. Special ways of striking the strings. I don’t know all the techniques involved, but you can use percussion mallets. Perhaps muffle the strings with one hand while plucking with another.”

Kind of like playing a harp, except this isn’t your grandmother’s harp music. The piece, which Ostling says is based on a series of Japanese Haikus, was composed by Baker when he was a professor of composition at U of L in 1988. He later revised the work, and it was performed in a new version by Pacifica and Oppens in a 2004 Chamber Music Society performance.

And it could change again.

Pacifica is now the quartet in residence at the Jacobs School of Music at Indiana University, and Baker is in Bloomington now, too, as a professor of composition. Oppens is based at Northwestern University and plans to fly to Indianapolis this week, scoot down to Bloomington to rehearse with the Pacifica and the composer, before the whole crowd drives on to Louisville for Sunday’s show. Pretty unusual. And one could reasonably expect something new might happen with “Tableux Funebres.”

On the traditional side of the program, Pacifica performs Beethoven’s quartet “Opus 135.” That’s the last of the composer’s famous Late Quartets, says Ostling, a professor emeritus at the U of L School of Music.

The Ravel quartet is the French Romantic composer’s only quartet — like his contemporary Debussey, who also penned just one.

“The Ravel is a warhorse, one of the masterpieces of the repertoire,” Ostling says. “It’s full of impressionistic color.”

This is the Pacifica Quartet’s fourth appearance here in the Chamber Music Society series. This season, Pacifica makes two European tours, in addition to a North American schedule that includes two performances at the Metropolitan Museum of Art, in New York, where the quartet was previously in residence.