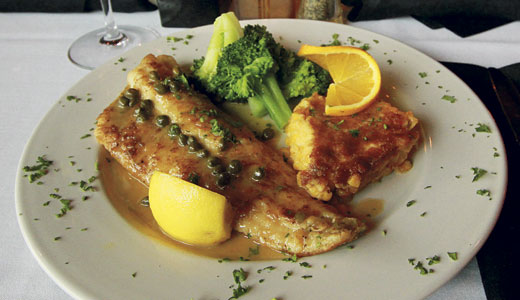 Some restaurants become landmarks through longevity in place, gaining familiarity by virtue of “always” having been there. The Seelbach’s Oakroom and Brown Hotel’s English Grill fall easily into this category of historic worth, and a generation of Baby Boom icons — the original Bristol, Jack Fry’s, Lilly’s, Equus, Pat’s, DelFrisco’s and quite a few more survivors of the ’70s and ’80s — have become fixtures on the local dining map.

(This, perhaps, is why so many feel particular pain as the former Azalea building, a graceful restaurant venue since 1870, was allowed to fall into grubby disrepair so as to justify its destruction in favor of an anonymous doctor’s office building and a franchised chain eatery.)

But today, let’s honor another kind of landmark longevity, a linear progression that focuses not on architecture but on individuals, those memorable hosts who move from place to place like wandering nomads, always bringing along a following crowd.

Bim Deitrich, of Formally Myra’s, The Bristol, Deitrich’s, Allo Spiedo, Primo and now Quattro in Fourth Street Live, is a local paterfamilias of this genre. But not far behind him marches the affable Rick Dissell, who has served since the ’80s as welcoming host for at least three iterations of Rick’s in St. Matthew’s and a spell at Blue Parrot (the suburban location that later became Limestone), and who has settled in comfortably now after almost five years at Blackstone Grille in Prospect.

There is a consistent, and winning, formula that runs through all of the establishments where Dissell and his wife, Cathy, have provided the hospitality: a welcoming bar — or perhaps we should call it a “lounge” — that attracts a neighborly crowd; and a dining room that’s comfortably upscale but never stuffy, serving well-fashioned American cuisine.

Blackstone is tuned for leisurely dining — I can’t imagine ever being even gently pushed to hurry my pace so they can “turn” a table. You might very well bump elbows with a well-known Louisville sports or media personality here but are less likely to encounter a visiting Hollywood celeb. The simply furnished dining room keeps the lights turned down, but there’s good lighting to illuminate the tables, a winning combination.

Open for dinner-only every evening but Monday, Blackstone offers a variety of apps, salads and pasta dishes, plus a dozen main-course options starting at $13 for a small portion of “light” fried chicken, which seems to be a translation of poulet meuniere a la Francais, a description that might not sit as well with Blackstone’s American-casual style. It’s boneless chicken breast, lightly dredged in seasoned flour and pan-fried crisp. Entree prices top out at $28 for a 12-ounce center-cut New York strip steak, served sizzling with a melting dab of house-made herb butter.

There’s a little something for just about everyone, and entrees come with two sides and warm, fresh dinner rolls like Mom used to make, or at least like mine did. There’s char-grilled brown-sugar salmon ($23), bacon-wrapped sea scallops ($18 or $26), or walleye pike ($23) for the seafood lovers; the light fried chicken ($13/$17) or chicken scarborough, a cream-finished chicken and veggie stir-fry ($20), for the poultry-philes; a stuffed portobello ($15) for vegetarians; chicken livers ($16) or calves’ liver ($19) if you’re feeling offal; and a variety of steaks.

Those steaks, by the way, are all 30-day-aged Black Angus beef from nearby Creekstone Farm, and management adheres to the gold standard for those who care about treating well-aged quality beef with the respect it deserves: “Cannot be responsible for steaks ordered well done.” The chicken is all-natural and hormone free.

The lounge stands ready to serve your adult beverage needs, with plenty of good options on a list of 30 selections or so, with most items comfortably priced in the $20s and $30s (about half of them available by the glass for $7 to $11). Mary sipped a traditional mojito ($8) and declared it “strong.” I was happy with a Sam Adams Winter Lager ($3.75).

Fried green tomatoes ($7) made an app big enough to share, and they ranked right up there with the best I’ve ever tasted. Three thick, golden-brown rounds were right on the point of green-tomato perfection, ready, not under-ripe, pale green, crisp and firm with a fresh acidic tang. Perched atop a bed of field lettuces and accompanied with a creamy-spicy roast red-pepper mayo, they came out to the table still sizzling.

Spicy Thai pasta ($15/$19) “fused” Thai and Italian flavors. Al dente spaghetti was tossed with chopped tomatoes and onions and fresh broccoli florets, plus your choice of chicken ($15) or shrimp ($19) in a hot-sweet garlicky olive oil dressing with Thai-style spice.

We thought we were full but still devoured a tall, crumb-crusted wedge of coconut cream pie ($5), a feather-light celebration of sweet coconut and cream.

Dinner for two, including the drinks, totaled up to a fair $69.70, with a $15 tip in recognition of friendly and competent, never intrusive service.