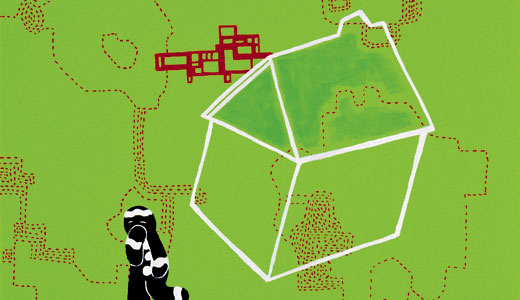 Donté K. Hayes’ exhibit at Garner Narrative is storytelling at its best: It is colorful and engaging, each piece’s name its own layer, indecipherable from the painting. Hayes mixes history and simplicity, calling on his audience to fill in the blanks of his works — inviting them to create their own story from his pieces. “The Real Tales of the Gingerblack Man” is an exhibit that draws the viewer into a world of its own — a grim and colorful folktale.

Hayes follows the journey of the cookie-shaped protagonist in search of the American Dream. “The Gingerblack Man is the black sheep, the marginalized, anti-hero archetype of folk tales,” he explains. The Gingerblack Man becomes a guide for his viewers, leading them through his world, exposing his troubles and, at times, becoming buried by them — his illustrated thoughts are meant to spur further consideration of archetypes and symbols left open to interpretation. There is no beginning or end; each piece succumbs to the next, creating a flow of color and contrast.

Hayes says he was inspired by the African-American experience and the ups and downs throughout history. During the Gingerblack Man’s journey, he encounters several issues that allude to these tribulations: In “Foreclosed,” he is turned out into an abstract world, rejected from a home that has only a vague shape. “Dream Deferred” references Langston Hughes, an African-American poet and activist during the Harlem Renaissance. It is perhaps the least colorful piece in the exhibit, a rough outline with layer upon layer of sketch and paint.

While individual interpretation is a staple in art, Hayes certainly milks this standard for all it’s worth. Each piece is designed to encourage viewers “to bring their own narrative and reflections to the work of art,” he says. In doing so, however, Hayes challenges these interpretations: The Gingerblack Man is presented as the anti-hero in the story, and yet he is also representative of a more ethereal concept — abstract in the way his world is. He represents the “everyday truth” that can be found in life, a truth that is constantly battered and bruised in the journey to find its place. But despite its hardships, the journey is bright in its hope, much like Hayes’ work. Each piece is vivid and colorful, because, as Hayes says, “Life is beautiful.”

“The Real Tales of the Gingerblack Man” hopes to encourage self-reflection and critical thought. It is colorful because it is indicative of every aspect of life. It is abstract because it is meant to be an archetypical experience. And yet, above all, it proves what Hayes truly is: an excellent storyteller.