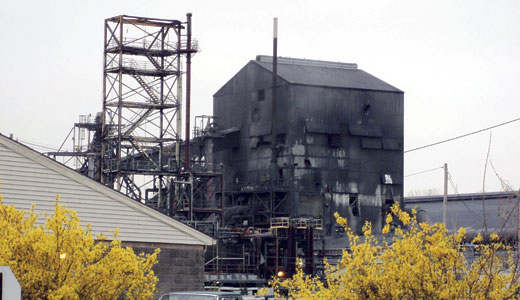 It was 5:40 in the evening, and Mike Lehn was on break. The Carbide Industries maintenance worker grabbed a Mountain Dew and sat down to relax for a moment during a day that, so far, was like any other. He sipped his soda, sinking into the soft chair in the middle of second-shift, taking the strain off his feet in the precious few minutes before he went back to work.And then the world blew apart.

“You felt the explosion more than you heard it,” says Lehn, 43. “It shook the ground. It shook the entire building.”

Forty yards away from the break room, the Carbide plant’s 3,800-degree Class-A electric arc furnace — one of only a few of its kind in the country — exploded in a fireball of dust, gas and molten calcium carbide, knocking Lehn from his chair.

“I looked outside the door, and it was nothing but a big wall of fire,” he says.

The blast smashed the windows of the nearby control room, a mere 12 feet from the furnace, where Steve Nichols and Jorge “Louie” Medina had been working. Amid the chaos, Lehn and other members of Carbide’s emergency-trained response staff began performing CPR on the men, who had suffered severe steam burns to large portions of their bodies. Nichols, 59, and Medina, 56, died later that night.

It was a night Lehn remembers well; a night he and roughly 200 others revisited on a recent February evening gathered inside the Seelbach Hotel’s Medallion Salon, where members of the U.S. Chemical Safety and Hazard Investigation Board presented an investigative report on the fatal March 21, 2011, blast.

After nearly two years of investigation and access to Carbide Industries employees and documents, the CSB was unable to determine the exact cause of the blast, which reduced the arc furnace — in operation years beyond its intended lifespan — to a smoldering husk of metal and ash. They concluded that due to the rarity of the plant’s furnace, there existed no requisite safety protocols set forth by the National Fire Prevention Association, and recommended that they be created.

The report also found that routine operations at the Bells Lane plant, which manufactures calcium carbide for iron, steel and acetylene producers, had become lax despite several “overpressure incidents,” aka “blows,” within the last 20 years. Though the subject of multiple state labor cabinet citations, plant management ignored the warning signs and continued with business as usual. Up to 26 work orders related to repairing leaks in the furnace were disregarded.

As noted in the report, one such “blow” in 1991 shattered the window to the control room, located mere paces from the furnace. But instead of relocating the control room to a safer location, Carbide doubled-down on the windows, replacing the shattered pane with reinforced glass — which was damaged by another blow in 2004.

“After the 2004 incident,” the report reads, “Carbide replaced the single-pane reinforced glass with double-pane reinforced glass, which was blown in by the March 2011 incident and which directly contributed to the fatal thermal injuries. Despite these previous incidents, Carbide’s response to the previous incidents did not sufficiently address the hazard nor prevent the events from escalating.”

In fact, the report noted what was referred to as a “normalization of deviance,” whereby personnel, having ignored incidents like the blows for so long, accepted them as normal occurrences in their daily operations.

“What we see here in this particular investigation is that three factors brought us to this tragedy,” CSB Chairman Rafael Moure-Eraso said during last week’s meeting on the report. “The tolerance of explosion that happened through the years, the acceptance of continuing operations … and the failure to change the location of the operating room after two incidents of explosions. Those are the lessons that we specifically learned from this incident.”

In comments to the press, Moure-Eraso said Carbide Industries “displayed a chronic lack of commitment to figuring out what was going wrong, ignoring all the warning signs, even as its workers were exposed to a potential massive explosion just a few feet away from their control room,” and he called the 2011 blast a “case study into the tragic, predictable consequences of running equipment to failure even when repeated safety incidents over many years warn of impending failure.”

Carbide Industries’ plant manager John Gant released a statement following the publication of the CSB report, saying the company has “addressed all of the recommendations made by the CSB as a result of that investigation.”

“Additional safeguards and policies have been implemented that will further strengthen the safety and environmental performance at Carbide Industries,” Gant said. “We appreciate the help and support that the CSB has provided over the past two years.”

While Mike Lehn agrees his employer has stepped up efforts to address safety concerns and is generally supportive of the incident report that the CSB voted to adopt, he takes issue with the established response of the mostly volunteer Lake Dreamland Fire Department, whose lax response time he called “criminal.” He says firefighters arrived at the scene relatively quickly but took nearly an hour and a half before entering the building to attend to the men inside.

“We were on the ground right next to the furnace (performing CPR) on Steve and Louie for 40 minutes,” Lehn says. “They refused to come into the plant because of possible contamination.”

“That’s absolutely false,” George tells LEO Weekly. “I was the second person on the scene, and I assisted that gentleman carrying his co-workers down the steps.”

The CSB has not responded to a request for comment on the emergency response issue as of press time.

During the public comment period, members of the public — including Metro Councilwoman Attica Scott (D-1) and an attorney for the Carbide Industries’ labor union — voiced a myriad of concerns that suggested more needed to be done to ensure the safety of Rubbertown residents as well as Rubbertown chemical plant employees, up to and including improvements to the Rubbertown Community Awareness Line, or RCALL, and lambasting the notion that corporations will self-regulate in the absence of state intervention.

“I wish this meeting had been held in a location in west Louisville,” Councilwoman Scott said. “No resident — some of whom are sitting here today — should have to go door to door to inform people about an explosion … that is unacceptable. My question to you all is, what is the community responsibility of Carbide? What accountability do they have in our community?”

For others, like Rubbertown Emergency ACTion’s Eboni Cochran, the Carbide incident represents a broader problem for Rubbertown residents, who rank among the poorest in the city and are geographically trapped, living next to dangerous chemical plants.

“Workers and people living near the fence line can no longer be seen as expendable,” said Cochran, who added that the CSB should conduct similar investigations of all chemical manufacturers in Rubbertown.

“There are thousands of people who live near these facilities,” she said. “This is nothing against the workers. This is against the leadership of companies who, time and again, ignore the warning signals. And this is to the mayor of this city, and Louisville Metro Air Pollution Control District, who just sit back lackadaisical saying that’s a state problem … They must come up with a plan, and they must come up with it now.”