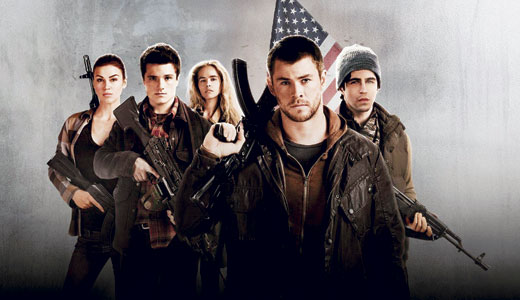 A remake of the much-loved teens-against-Commies actioner of 1984 that launched or cemented the careers of Patrick Swayze, C. Thomas Howell, Lea Thompson, Charlie Sheen and others. This new one stars Chris Hemsworth, Josh Peck, Josh Hutcherson, Adrianne Palicki and the like. How does it compare? The newer version is more high tech and more politically correct, but it suffers at the hands of first-time director and former stuntman Dan Bradley. That being said, it’s still damn affecting — particularly the evolution of diminutive stunner Isabel Lucas. We suggest you get both and compare them yourself.

Fans of the “Warhammer 40000” game have been breathlessly awaiting this, the first feature-length movie set in that 41st-millennium world under sedge from an alien race. Our only hope lies in a pack of unruly, genetically enhanced super soldiers. Solid, if basic, CGI animation plus voice work by the likes of Terence Stamp, John Hurt and Sean Pertwee combine to tell of one mission where a surprising new threat emerges. Nicely grim and gruesome, though the “R” rating seems to be overkill.

Not to be confused with “Rise of the Guardians,” this kidvid is not without its entertaining Bad Movie mojo, much of it courtesy of Ron “Arnold Horshack” Palillo. When a conman (David Preuss) tries to swindle a pop band, they become superheroes of a sort and outsmart the bad guy with Palillo’s help. FYI: This was originally created as a starring vehicle for Florida’s TGK, a would-be teeny pop sensation. Pre-teens will probably get the biggest kick.

I WANT YOUR LOVE

Based on an award-winning short from 2010: When a failing gay San Fran artist painfully decides to return to his Midwest roots, his friends gather to give him a proper send-off. Over the course of the evening, he reexamines his life and vocation with lovers and acquaintances alike, taking the viewer along on an intimate journey. Ultimately, this is a movie about what it means to be an adult in today’s world.

IN SEARCH OF MEMORY

Here’s the perfect flick to inspire young people to become doctors: an Austrian biopic about Nobel Prize-winning Dr. Eric Kandel, an irrepressible neuroscientist whose life reads like a horror novel (including a chapter on escaping from Nazis), whose passion about understanding what makes humans human will take your breath away. Finally available in America, and in English. Recommended.

Bruce Willis and Vince Vaughn — do we really need to go on?! — star in this indie comedy about luck. Bruce plays Dink, a so-so gambler in Vegas, married to Catherine Zeta-Jones, who doesn’t think much of his new “good luck charm,” Limey stripper/waitress/bookie Rebecca Hall. But he is winning, which ticks off everyone else. Co-stars Joshua Jackson, Laura Prepon and more.

As we often point out: Limey detective shows are simply the best. This Brit/Canadian series, set in the 1890s, stars Yannick Bisson as Det. Murdoch, a bright and energetic man with the mind of a scientist who uses the then-unknown techniques of forensic analysis to cleverly reveal murderers and seriously annoy his contemporaries. Aided by the aptly named Helene Joy, with Thomas Craig and Jonny Harris, you simply won’t find a more entertaining cop show anywhere. Warning: If you watch Season 5, you will find yourself ordering the Season 1-4 set (around $120 but worth every penny).

For the uninitiated, Angel Walker is a legendary burlesque dancer closely associated with the ’60s San Francisco counter-culture scene, the Rat Pack, Bob Hope USO shows, and a list of high-profile lovers of both sexes. She was also one of the entertainment industry’s few performers who could play the bass guitar topless and dance with her boobs, ass and navel on fire. This upbeat and lively doc takes a look at her life and career, assisted by many of the people who have been inspired by her, including Russ Meyer’s Kitten Natividad, porn star Ginger Lynn, and scores of past and present burlesque performers. A welcome look at a great lady.

This is the true story of a French millionaire (François Cluzet), rendered quadriplegic in a hang-gliding accident, who advertises for a full-time professional caretaker. Amidst the crowd of trained, certified respondents is one black man from the ghetto (Omar Sy) who only wants his Social Security forms signed, saying that he applied for the job. The millionaire is angered by his lack of ambition, meeting with him to ask, “Why?” The answer leads to a lifelong friendship that changes both of them for the better. Why this wasn’t nominated for an Oscar is beyond us; it’s absolutely incredible. In French with subtitles.

A rousing biodoc on pro-skateboarder Danny Way, most famous for his 2005 ollie over The Great Wall of China. Long before that feat, however, he had dominated the sport, leading to more lucrative merchandising deals, larger and more skilled pro teams, and the development of ever-larger skate parks around the world. The product of a rough childhood, his prowess is the result of boundless determination born of pain. Inspiring as hell.

While not big fans of John C. Reilly, we have to admit that he does a terrific job in this animated tale of a video-game bad-guy character who yearns to do good and be loved. But the best things about this too-good-for-kids outing is all the vidgame imagery, reminiscent of early 8-bit arcade Ataris/Nintendos, and the voice work by Jane Lynch, Sarah Silverman (who is surprisingly good), Jack McBrayer (“30 Rock”), Alan Tudyk (“Firefly”), Mindy Kaling and others. One of Der Mouse’s better efforts; highly recommended.

While it would be easy to write this thriller off as just another “revenue movie,” short on entertainment but high in cameo count, it redeems itself with the help of an impressive cast. Andy Garcia stars as a talk-show host and former spy who agrees to rescue Forest Whitaker and Eva Longoria from the clutches of an evil corporation that has poisoned the waters of an Ecuadorian jungle village.

INTERVIEW WITH A HITMAN

A Limey super-assassin-doing-whatever-it-takes-to-retire gangster flick, starring Luke Goss of “Death Race 2” and “Death Race: Inferno,” with smokin’ French babe Caroline Tillette as the requisite eye candy. Another shining example of how Euro hitman movies are so much deeper and more complex than American hitman movies.

Call us overgrown children, but there’s nothing we like better than a good old monster movie, and this fills the bill nicely. After lovely Nikki Moore (“Sorority Row”) is killed by a robber, her dad and husband join forces with a desert holy man/bum to bring her back to life. But what they resurrect is far from what they expect. Good, no-budget scares with an attractive cast.

Aka “The Samurai of Ayothaya,” this routine martial-arts/revenge flick from Thailand is elevated by its brutal ballet-like Thai boxing and charismatic leading man, Seigi Ozeki. Based on the real life of Yamada Nagamasa, a Japanese Marco Polo who became governor of Nakhon Si Thammarat province in southern Thailand in the early 1600s. Good stuff.

If the idea of seeing Gerard Butler with his shirt off excites you, then you’re the target audience for this lightweight romcom. Butler is a man-child former soccer star who reluctantly agrees to lead his son’s team, unaware that he is just fresh meat for their sexually voracious moms. The all-star cast includes Jessica Biel, Dennis Quaid, Uma Thurman, Catherine Zeta-Jones and our pal Judy Greer.