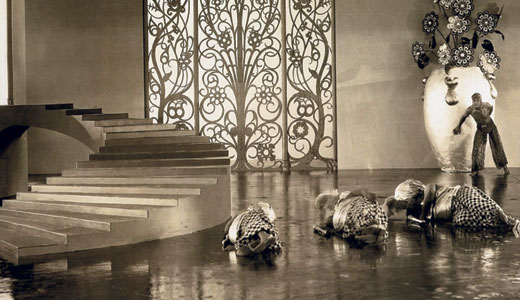 The Thief of Bagdad

Nominated for seven Oscars, this is a movie that Hollywood would have turned into a serio-comic “caper movie” a generation ago, but director/star Ben Affleck wisely drops us squarely into the real world, with real people in real peril for their lives. It details the insane-sounding secret joint CIA-Canadian venture to rescue six American diplomats hiding in the Canadian ambassador’s house in Tehran during the 1979 hostage crisis. Their plan? To enter the country disguised as a film crew — with Hollywood’s help — and smuggle the diplomats out in plain sight. No one believes it will work, but it’s the best idea on the table. A breathtaking movie experience starring Affleck, Bryan Cranston, Alan Arkin, John Goodman, Clea DuVall and more.

THE THIEF OF BAGDAD

This is one of those films that everyone has on their “must see” list, starring the amazing Douglas Fairbanks at the height of his popularity — and seemingly effortless physicality — jumping and fighting and flying his way through the streets and skies of beautiful Bagdad for director Raoul Walsh. Yes, it’s a silent film, but please don’t be stupid and let that keep you from seeing it. This was America’s first great fantasy/special-effects movie; a masterpiece, now newly restored to Blu-ray with a fresh score based on the original sheets. Movies just don’t get any better than this.

Right up front: We hated the book and didn’t see the movie, Part 1. But if Ayn Rand is your thing, be our guests. Samantha Mathis comes aboard in Part 2 as Dagny Taggart, a businesswoman who uncovers a revolutionary motor that could save the global economy left shattered by rampant, self-indulgent greed in Part 1 — but she needs the missing inventor to make it work. Watch for favorites D.B. Sweeney, Ray Wise, Diedrich Bader from “The Drew Carey Show,” and Bug Hall.

This tasteless, ultraviolent black indie comedy is a demented joy for fans of low-rent rotter movies. When a chemist in NYC invents the most potent drug-salts ever imagined, he uncovers a teensy side effect: It turns the consumer into a maniacal flesh-eating zombie! Sounds like a good business plan to us. An over-the-top topical delight for those with a strong stomach.

A simple, no-budget — if earnest and heartfelt — indie drama that we know you never heard of. Paul Dano is a struggling musician (or is that redundant?) who drives all night to fight with his estranged wife (Margarita Leviev, TV’s “Revenge”) over custody of their daughter, Shaylena Mandigo (and, no, we didn’t make that name up). With Dakota Johnson, “Kate” of the late “Ben and Kate.”

For a Nickelodeon movie, this little wild-night comedy pushes the kiddie envelope. Victoria Justice (“Victorious”), ready to graduate high school and run screaming to college/freedom, must babysit her obnoxious little brother on Halloween instead of partying. And then the little monster disappears! She quickly gathers some friends and they embark on a weirdo-filled adventure that somehow parallels their own real-life issues. Surprisingly sexy, with Chelsea Handler as her over-stimulated mom and Jane Levy from “Suburgatory.”

Game Warden Yancy Butler (“Witchblade”) and nut-job Robert Englund (“A Nightmare on Elm Street”) are the names on the box, but the real stars are the fakey CGI crocs and even less talented high school swim team that they’re about to nosh on in this (supposedly) final outing for the SciFi Channel. Actually, the star-of-record is lovely Elisabeth Röhm from “Heroes,” but who really cares? Big Dumb Fun at its finest.

We really got a kick out of this spooky serial-killer tale. Ethan Hawke plays a writer researching his next novel when he discovers a box of old videos. Each shows a different family being horribly murdered. (This reversal on the overused “found footage” technique works great here.) And the more he watches, the more he realizes that his own family may be in danger from the seeming supernatural agent behind the carnage. Despite being jaded horror fans, this thing scared the living crap out of us. Highly recommended.

Matt Lucas, Billy Crystal, Johnny Knoxville, Rebel Wilson, Juno Temple (as a stripper!), Dolph Lundgren, Saffron Burrows, James Caan — (deep breath, whew!) — and James Marsden as the institutionalized brother who holds the key to everyone else’s sanity. What can it all mean? The hell if we can tell you, but it is wildly entertaining as Lucas tries to hide his dead landlord from the cops while waiting on an important letter that spells salvation. Recommended indie nonsense.

A group of baddies throw a party to celebrate Noah Hathaway’s prison release — and his silence about their evil deeds. The festive centerpiece is a beautiful, naked, seemingly catatonic woman covered in sushi with great boobs. Uh, the girl, not the fish. With the boobs. Anyway, the real main course for Tony Todd, Mark Hamill (yes, that Mark Hamill), Jeff Fahey, Michael Bieh and, of course, Danny Trejo is “Where the hell is our money?” With Sonny Chiba as the chef and Cortney Palm as the titular food-warmer.

We’re not much on sports docs, but this Best Doc Oscar winner knocks it out of the park. The Manassas (Tennessee) Tigers were so under funded and so bad that their competition actually paid them to be a “practice team” — they were literally professional losers. Then Bill Courtney arrived at the 110-year-old institution in 2004 and volunteered to help out, part time. Within five years, the team, made entirely of underprivileged inner-city Memphis teens, was poised to take on the world. One of the most exciting docs you’ll ever see. Highly recommended.

Keira Knightley continues her conquest of classic costume compositions in yet another collaboration with director Joe Wright (“Pride & Prejudice,” “Atonement”). Those with literary leanings will recognize this Leo Tolstoy favorite set amid Russian high society of the late 1800s. Pampered Knightley, wife of bigwig Jude Law, gets the hots for Aaron Taylor-Johnson from “Kick-Ass” and proceeds to shock everyone by behaving scandalously. Yeah, it’s all just self-indulgent eye-candy, but, Oh! What eye-candy! Co-stars Olivia Williams and Guro Nagelhus Schia.

The “new” Battlestar Galactica saga, like its sexy Cylons, just keeps grinding on. In this most recent series, a hotshot pilot named Will Adama (hmmm) gets assigned to the Galactica where he quickly P.O.s his new partner. Together they bitch and argue their way through a seemingly innocuous mission — to deliver knockout babe Lili Bordan (“Silent Witness”) safely to her destination — when their passenger begins acting … strange. Uh oh. Made for the web with Luke Pasqualino (“The Borgias”) as the young Adama and Ben Cotton (“Alcatraz”) as his more mature co-pilot. How good is it? Simply put: Better than “Caprica.”

A former cursed monastery in a remote village, the site of numerous suicides, is now marked only by the presence of a hoary old tree. Four friends (with requisite hand-held vidcam) decide, on a lark, to visit it. Bad stuff happens. A so-so bit of romantic spookiness, perfect for a date night with friends in front of the TV.

Mini-007 Ricky Lazlo Jr. (Christopher Fazio) kicks into action when his FBI dad is kidnapped, ready-equipped with an arsenal of high-tech geegaw that Sean Connery would have traded his Aston Martin for back in the day. It’s the latest in a series of Dove “family approved” comedy adventures for kids. But worth watching anyway.

A dark, rough-and-tumble subtitled tale from France about an aging gay prostitute who rescues a young rival he finds unconscious in the woods. Together they screw and rob a series of clients in Paris until it becomes unsafe for them to remain. Through it all they dream of a perfect place where they can go to live in peace, a fantasy that grows increasingly unlikely as time passes. (Spoiler alert!) A uniquely French character study with a surprisingly upbeat ending.

Aka “The Terror Beneath”: More silly-assed SyFy Channel CGI nonsense, this one about a “seed from the Garden of Eden” that starts taking over the world after a crazed scientist screws with it. Meanwhile, a pair of “militant environmentalists” come up with a means to save us (natch). Features Jesse Moss from “Tucker and Dale vs. Evil”, cute blonde Stefanie von Pfetten (“Percy Jackson”) and Adrian Pasdar.

Gorgeous French journalist Diane Kruger is captured by the Taliban and scheduled for execution. Only Djimon Hounsou and his team of rugged-looking, largely French hero-types can save her. This modern updating of WWII “kill all Nazis” movies isn’t meant to be taken seriously; a straight-up action flick with lots of gunfire and explosions set largely amid desert sands. Of course we liked it!

With stars like Steve Austin and Dolph Lundgren, you don’t expect Shakespeare, right? That’s good, and so is the crime-actioner with Austin as a mob flunky who is supposed to deliver a mysterious package to The German (Lundgren), only to discover that there’s a passel of assassins on his tail. Big Dumb Mindless Fun.