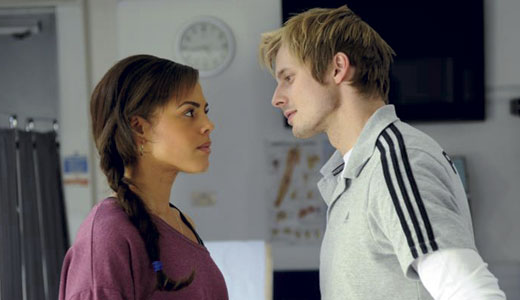 We got a real kick out of this hokey “poor girl athlete competes with rich girl athlete for a spot on the Olympic team” retread from Britain. Yeah, it trots out every sports cliché in the book, but we were nonetheless thoroughly entertained as lovely athletes Lenora Crichlow and Lily James run their hearts out (usually in slo-mo) to a hip, upbeat soundtrack. Won’t change your life, but it will put a smile on your face. We guarantee it!

Yummy Danielle Panabaker (“Piranha 3DD”) is perfect as a wet-behind-the-ears college student who suffers in silence after being attacked, harassed and abused by a series of men. But all that changes when she meets crazy-hot doe-eyed redhead Nicole LaLiberte (“Dinner for Shmucks”) who has her own way of handling manhandlers. Their revenge escalates into a full-blown killing spree, taking down any man who happens to walk by — and then it gets rough. A nicely perverse fem-powerment rape-revenge free-for-all like they haven’t made since the ’80s.

Fans of surfing and “The Daily Show” know all about this film, the true story of maverick surfer Jay Moriarity (Jonny Weston), co-starring Gerard Butler — who damn-near drowned! — as legendary guru of the waves, Frosty Hesson. The two have nothing in common except the desire to test themselves against the lethal Mavericks surf break in northern California, some of the highest, most deadly swells on the planet. How does it go? Well, we suggest you just watch it and be prepared for anything. A unique and unexpected film that you’ll be talking about for weeks.

What a terrible name for such a great movie! This magical, dreamlike fairytale from France follows a world-famous musician who gives up on life, literally going to his deathbed when his violin gets crushed. And there he begins to dream. And in these dreams he relives a life where each day is filled with magic and wonder and music, eventually meeting the Angel of Death who shows him the lives-to-come of his children. Finally we, the viewers, come to understand his life and his choice to end it. A wonderfully upbeat, profound and joyous movie about death unlike anything you’ve ever seen. Highly recommended.

It might be a waste of time to attempt to explain this film, other than to say that (1) you’ve never seen anything like it, and (2) it will rekindle the love of movies that you first felt as a child. But we get paid by the word, so … A man spends his day traveling around Paris in a limo, but each time he steps out, he and the world have morphed into a different fantasy. He’s an old gypsy in one, a terrifying ninja warrior in the next, a super-lizard sex-god, a troll, an assassin and more, with each transformation representing a different cinematic era. Or maybe it’s just a big-ol’ comic book. Or a love letter to moviemaking. Whatever it is, we loved it.

While the 1969 movie version with Maggie Smith is a cinema classic, this one-season Limey miniseries starring Geraldine McEwan (star of BBC’s many “Miss Marple” offerings) has the luxury of time, allowing us to savor the cumulative effect of the crusty spinster on the lives of the girls in her care at a 1930s Scottish school. Some are abused by their families, others are unloved, but all come to blossom under McEwan’s tutelage — and despite the vindictiveness of the school’s wicked headmistress. A pure joy.

If anyone had told us in 1993 that this goofy cartoon of an Australian wallaby trying to fit into American life would be a hit and last four seasons, we would have told them they were nuts. But that’s what happened, and we couldn’t have had more fun. With the help of his loyal dog Spunky and cow-wolf best-bud Heffer, he learns to survive the indignities of his crappy neighbor Mr. Bighead and enjoy all the U.S. has to offer — like meals at his favorite restaurant, the “Chokey Chicken.” Lots of weird, funky sexual innuendos make this too good for kids. Great stuff.

This thinly veiled allegory of the Scientology movement (a cult religion invented as a joke by sci-fi author L. Ron Hubbard) follows former Navy man Joaquin Phoenix, returning home from war angry, confused and unsure of his next move. He’s the perfect prey for psychotic cult leader Philip Seymour Hoffman, who wrests him away from his family, setting the man up to be his successor. A lot of people found the ending unsatisfying, but the point of the movie is to showcase the two main actors at the pinnacle of their craft. You’ll be talking about this for days.

Is it really over? Thank friggin’ GOD! If we had to sit through one more episode of this hyper-romantic teeny allegory for zits and sexual awakening, we were going to take a bath with a toaster. But then, we weren’t the target audience, were we? Therefore: Bella and Edward (Kristen Stewart and Robert Pattinson) adjust to her newfound afterlife — and parenthood — while their instantly grown daughter, “imprinted” on wolf-boy Taylor Lautner, roams with the pack. It all ends (we hope) with a slam-bang, snowy battle royale between the lovers and the evil Volturi of Rome. The END.

You might think that a movie about the struggles of an elderly maid who suffers a stroke would be less than pleasant, but this quiet import from Hong Kong would prove you wrong. By focusing on the old woman’s simplest of pleasures, you find yourself thinking of her as a real person, caring about her and the little things we all take for granted, like family and friends. It is, as the title says, a simple story of a simple life. Masterful filmmaking.

Yeah, we heap a bunch of abuse on that smarmy purple monstrosity, but any prehistoric beast that tells kids to stop and appreciate the love of friends, family and themselves is OK in our book. A three-DVD set, almost two-and-a-half hours of goofy, loving dino-fun with extra hugs and kisses. Make sure you watch it together.

What? Sharon Stone and Billy Zane made an action movie and you missed it? Hmmm, wonder why? This is, of course, one of those “revenue” films that big stars do to keep funds flowing between real movies, but that’s not to say it isn’t a ball to watch. They lead us into a human trafficking plot on the Mexican border where lots of terrific, unknown actors pick up the story and do most of the legwork. We liked it, and particularly loved the aptly named Promise LaMarco as a sweet-faced blonde Arizona news reporter.

This sorta-true war drama tells of American soldiers at the Battle of the Bulge who uncover plans to create a “super bomb,” and then stumble onto a clandestine operation to smuggle the lead German scientist out of Europe. Having nothing else to do, Tom Sizemore teams up with a POW who knows all about it, and they take over the operation. Far fetched? Yeah. Entertaining? A solid little low-budget war flick with a less-than-perfect soundtrack, but still exciting.

Better known as “Gunfight in Yuma,” this perfect bad movie pits Joe Estevez as “The Reverend” against gunfighter Christopher Mur as “The Tailor,” while blue-eyed soaper Molly Kasch begs as “The Daughter” — and Frank Stallone is skulking around in there somewhere. Bad, but entertainingly so. We love crap like this!

This tale — focused largely on two characters, an old man and young woman locked in a bathroom — is a talky hoot from Spain. The old man is a famous journalist who tries to seduce the coquettish young journalism student intent on interviewing him. Or is she seducing him? It’s so much erudite fun that you won’t care as the two talk themselves out of their clothes and into a bathtub together. Extremely well written and surprising. We loved it!

NOBODY GETS OUT ALIVE