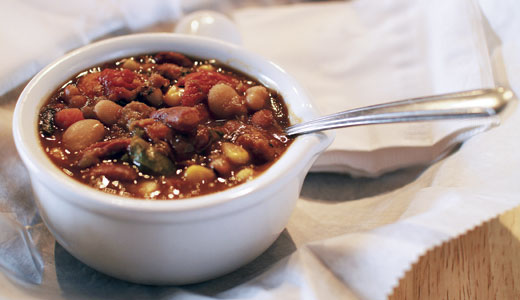 “You’re taking forever to eat your soup,” my wife grumbled. “What are you doing?”

This earned me a glare, but I kept on keeping on. “Garbanzo. Pinto. Great Northern. There’s a lima.”

As it turned out, I never did complete the project of identifying all of the beans in Earth Friends Café’s 13-bean soup. I couldn’t get past 11, even by counting a yellow corn kernel as a bean. But I can testify that it was homemade and very, very good, as was just about everything I tried at this recent arrival in NuLu.

Earth Friends Café (or EFC, as it calls itself) opened just last week in the space formerly occupied by La Bodega grocery and café in a faux-Italian storefront in Piazza Felice. EFC hit the ground running, having earned a place in the affections of our Southern Indiana neighbors with a spot on Grant Line Road and a café within the New Albany Floyd County Public Library.

The café’s vibe carries a distinctly vegetarian and even vegan tone, but omnivores can coexist here in virtuous satisfaction. Even if you don’t go plant-based, you can still dine virtuously, knowing that whatever’s on your plate comes from sources that practice humane, natural and hormone-free stewardship. It’s largely organic and mostly local, too, although that’s kind of hard to accomplish with tuna.

The lunch menu, our server said, comes over pretty much intact from the Grant Line Road operation, which this facility replaces. About 18 or 20 dishes are categorized as vegetarian, vegan and omnivore, plus soups, salads and sides.

Everything on the menu is $8 to $10, including choice of side. The olive nut sandwich, for instance, made with vegan cream “cheese,” olives, pecans and organic spinach on Rudi’s organic nut and oat bread, is $8; the chicken provolone panini, made with Marksbury Farm smoked chicken, Organic Valley provolone and garlic aioli on organic sourdough, is $9.95. There’s a broad selection of coffee, espresso drinks and smoothies.

The chipotle chicken breakfast burrito ($9.50) included a generous ration of juicy shredded chicken, pink and gently so it bore more than a passing resemblance to ham, wrapped burrito-style with fluffy scrambled eggs, tomato bits and a spicy chipotle mayo in a tender organic wheat tortilla. Fresh fruit side dishes added a healthy mix of purple grapes, kiwi slices and orange.

The curried tofu scramble wrap ($9) is listed as vegan, as it replaces the henfruit with soft, scrambled silken tofu warmed up with curry flavor, rolled into a pretty spiral with organic spinach and tomatoes in a wheat tortilla. A soy latte ($4.50) was thick, foamy and sweet, and even the cream in the dark, strong coffee ($3) was organic.

Who eats dessert for breakfast? If it seems as virtuous as the dense, chewy house-made, no-bake chocolate oatmeal cookie ($2), we do!

For lunch another day, General Tso’s tempeh wrap ($8.50), a vegan option, was colorful and fun, a bright and piquant mix of flavors and textures: marinated tempeh, fresh romaine, shredded carrots and crisp rice noodles, rolled into a wheat tortilla with a splash of salty-spicy teriyaki sauce.

The Mediterranean tuna melt ($9) came on a little strong, an earthy mix of tuna, black olives and artichoke hearts in a mayo dressing with organic white cheddar on organic sourdough.

We swapped in cups of the soup of the day ($3) for the regular sides and rated it a good deal. The tomato herb soup ($3) is vegan, so there’s no cream or butter, which makes for a lighter, tangier brew than the old lunch counter standard, but I liked it and was glad the herb accent wasn’t overdone.

In spite of the razzing I had to endure, it was fun trying to make out the ingredients in the 13-bean soup ($3). Red beans, black beans, pintos, maybe both navy and Great Northern white beans; garbanzos, lentils and limas — maybe little limas and larger butter beans. Mary thought she saw a green bean go by. That’s about 11, call it a dozen if you count the corn. Whatever. It was one fine, hearty winter soup, and I’d order it again.

A grenade-shaped sphere of chocolate bomb cake ($6) from Desserts By Helen was indeed the bomb, and unsweet iced tea ($2.25) was strong and fine.

Breakfast for two was $29.68, and lunch came to $31.53, with 20 percent tips for friendly, attentive service coping well with the new-restaurant learning curve.

For a good dinner time, dial 502
The inaugural “502 Restaurant Week” begins Friday and runs through March 3. Participating restaurants will offer a special three-course menu at $50.20 per couple or $50.20 per person, depending on the restaurant’s price level. (Tip and tax are extra, so don’t go cheap on the tip just because you got a deal.) What’s more, a portion of the proceeds will benefit Louisville’s Dare to Care Food Bank.

Check 502RestaurantWeek.com for the list of participating eateries, or download the 502 EAT app for your iPhone or Android. There may still be time for restaurateurs to sign on.