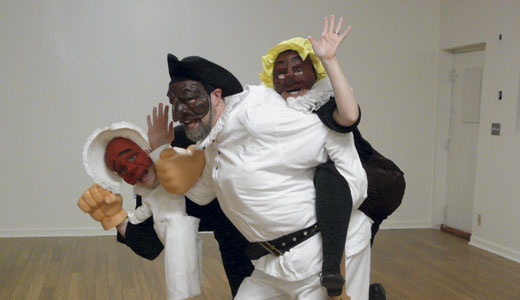 ‘No Punchbacks’
Presented by Le Petomane Theatre Ensemble. Written and designed by Gregory Maupin, Abigail Bailey Maupin and Kristie Rolape. Continues through Feb. 17 at the Bard’s Town. For reservations or info, email [email protected] or call 609-2520.

It’s a Punch and Judy puppet show come to life. It’s the couple’s anniversary, so, of course, Judy wants to go out while Punch stays in and watches The Baby. Wait, what? Punch actually ends up going out, sort of, or maybe it’s a dream/vision. We’re never really sure, but what starts out as a frustrating night in with the impossible task of trying to make The Baby stay in his/her(?) highchair and eat the damn noodles spins out into a series of hilarious and kind of tragic adventures.

The masked cast of three in Le Petomane’s latest commedia dell’arte-ish romp explore themes of marriage, death, children, the law (and run-ins with it), hunger hallucinations, existentialism, awkward first dates, and how we feel when dogs die on stage. As Punch, Gregory Maupin is our host for the evening, so to speak, talking directly to the audience in between (or during) scenes with flawless timing and delivery. He is Punch the whole time, while his counterparts, Abigail Bailey Maupin and Kristie Rolape, play all the rest of the characters, including a dedicated but love-ignorant constable, a dog, a hangman, a singing sausage, the cutest grim reaper I’ve ever seen, and, of course, Judy and The Baby.

All three actors work the stage at a level of expertise not easily attained. Not only do they use their voices effectively to create distinct characters, their physicality is incredible. Yes, this is a silly play, and it may just look like they’re dancing and bouncing around the stage, but they all move with purpose and never look sloppy for a second — except when they’re supposed to. It seems basic, but it’s not easy. This skill is especially crucial in this piece since their faces are half-covered by masks.

Le Petomane does a lot with a little, and on multiple levels. They have one crew member (Patricia Doyle) who operates the soundboard. The scenery consists of chalk drawings on the walls that can be changed as needed, and it’s part of the show rather than thumpy set changes in between scenes. The homemade costumes are simple and seem comfy for the actors to move and dance around in, but are tasteful and inspired by the 1600s, along with their classic half-masks. Even beyond the technical elements, nothing is wasted; everything said, done and used on stage is necessary. In “No Punchbacks,” they strip a common, everyday event — say, feeding a baby — down to its most basic level, and then they explode it in a hilarious and absurd but surprisingly relatable way. Oh, and sometimes they sing.

It doesn’t get much more DIY than these guys, and what they’ve come up with is a charming, witty evening of laughs. The Bard’s Town is a perfect venue, as well — sitting in the cozy upstairs theater with a drink in hand and laughing your face off is a perfect escape from the winter blahs, and if you’re anywhere near the front row, the actors are practically sitting in your lap. Le Petomane is a special group that Louisville is lucky to have, and this show is a riot that shouldn’t be missed.