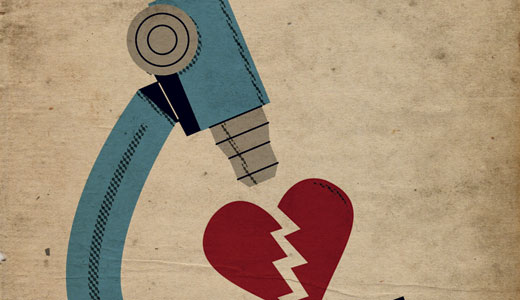 Breaking up is one of life’s painful slaps across the face. Most everyone has endured it at least once, and it’s never pleasant, whether you were together for two years or two weeks. It sucks as the dumper and equally as the dumpee — most of us have dabbled in both roles. As someone who strives to explore the whys and hows of life’s mysteries, I talked to a few experts of mind and body to find out what is really going on inside of us as we suffer with heartache.

Dr. Crosby Rechtin is an emergency room physician who shared his expertise on the physical reactions to love lost. Eli Karam is a licensed marriage and family therapist (LMFT) with a PhD and insight into what’s going on emotionally. And Rebecca Simpson is a local relationship blogger (“Crushin’ on Lou”) who willingly relayed her ups and downs in the dating world.

First off, as Whitney Houston inquires in song, Why does it hurt so bad, why do I feel so sad?

“Recent studies have found that the part of the brain that is activated in physical pain is also activated by psychological pain,” Dr. Crosby says. “It would follow that there would be significant overlap in the sensation/response to pain, regardless of psychological or physical source.”

According to Therapist Eli, “Some people think of breakups and the emotional pain as almost a trauma response. If the person did not see the breakup coming, it shatters the core stability they thought they had. It’s literally a mind-and-body connection. Your body is reacting in that way — you can’t eat, can’t sleep. After a loss of something like that, there’s a spike in situational depression, which can affect your ability to focus at work, eat, sleep.”

I can certainly relate. After one of my big breakups, I lost 12 pounds in two weeks and was basically a basketcase for months. I also felt worthless and alone, even though I had friends check on me daily. But I want to go deeper than that. What is really going on in the brain that causes us so much grief? Tell me, Dr. Crosby, in sexy medical speak, why couldn’t I stop crying and replaying the breakup in my mind?

Ask and you shall receive. So I’m wondering, on a scale of 1-10, where does a breakup land as a stressful life event? It’s surely not as serious as death or disease or forgetting to DVR “Homeland” (only kidding). Therapist Eli weighed in here: “The more time you have invested in it, the more things that are merged as far as other relationships, friendships, property, etc. The more you put into it, the harder it’s going to be on that continuum from 1-10. Dating is a filtering mechanism. Some people have to go through an experience multiple times to figure out what it is they want. And some people never learn. It’s really dependent on the relationship and the person. Breakups don’t have to be horrible or dramatic; they can really be life lessons and places you can grow from. No one, obviously, goes into a relationship wanting to end it.”

Which brings me to my next topic — how to move on. When does the crying stop? How do you let go of someone you thought you’d be with forever? How long is too long to wallow in self-pity. How soon is too soon to get back in the saddle? Therapist Eli thinks it’s a matter of completing two things — 1) let yourself heal, and 2) look back and learn.

“First, they have to ride the initial emotional wave, which is usually very strong emotions — either much sadness or anger,” he says. “Secondly, they need to look at their part. I’ve never seen any breakup where one person is 100 percent to blame. They may say, ‘OK, this person might not be perfect, but neither am I. This is what I did to contribute to my part and why it didn’t work.’ These people are generally more successful than those who just villainize their ex.”

Dr. Crosby suggests a combination of four things. He recommends that you understand grief is a normal process; reach out to friends and family or a counselor; look forward to the future by making new challenges, new memories, etc.; and take care of yourself by eating well, exercising, and not using alcohol, drugs or food to cope. Oh, and Facebook-stalking your ex (kidding again).

Blogger Rebecca agrees that staying busy and not dwelling on the past has helped her bounce back after breakups. “The things that helped me the most were meditating, working out and getting involved with new work projects — so basically committing to myself and my own happiness. But I will say, getting drunk, listening to sad music, crying and painting helped a lot, too,” she says. “The breakup process is different for everyone, so try to stay positive and not slip into the deep, dark hole of depression. Remember, it is soooo OK to lean on your friends.”

I mentioned Facebook earlier as a joke, but Therapist Eli says social media is no laughing matter when it comes to breakups. The smear campaigns, the photos, and all the passive-aggressive or snarky status updates geared at your ex are only the tip of the iceberg. “There’s not a week that goes by where Facebook has not impacted some significant relationship or marriage that I deal with,” he says. “My advice would be to take a Facebook holiday. Ten years ago, all the venting would happen privately — you would call a friend or maybe chew out your ex in person. But now you can literally have no filter. You tweet something or post something that later you regret. It’s putting your business out there for everybody. Taking a break or quietly defriending people without posting about it is ideal.”

Eli also believes that while it may temporarily feel good to bash your ex, it probably won’t help you heal. “The last thing you want to do is put yourself into a context where your friends are stirring you up. Sometimes your friends want to be supportive to you, so they think talking shit about your ex is the right thing. But really, it only stops you from moving on and letting it go.”

I wonder if letting go is easier for the dumper. While I was going through my breakup, I came across a YouTube video made by a teenager. He said it’s quite simple — one person was moving their suitcases out of the relationship before the other. The dumper has usually planned the breakup in advance, while the dumpee is often blindsided. Blogger Rebecca is on the fence as to which is worse. “Breaking up with someone means you will most likely let someone down you really care about, which feels awful,” she says. “But getting dumped is the worst, because you lose someone you want. I look back and continuously wonder what I could have done differently to make it work. I think it is pure agony loving someone who does not want to be with you.”

So why put ourselves in either position? Why love if it’s just going to turn to pain? My friend (and fellow LEO writer) Kevin Gibson wrote a song called “Idiots in Love” for his band the Uncommon Houseflies. In it, he surmises that we keep falling in love because, well, we’re idiots:

Everyone falls in love

We keep making the same mistakes

You tell yourself that she’s the one

Then she sabotages your breaks

Oh why do we believe this myth called romance?

Why do we buy the Hallmark cards?

We search for love even though we’re sick of it

But we keep doing it

And so we cry and cry

We only fall in love because we’re idiots

That is certainly one opinion. But aren’t love and the search for a partner inherent? Let’s let the good doctor have the last word.

To contact Eli Karam, go to elikaram.com. To check out Rebecca Simpson’s blog, go to crushinonlou.com.