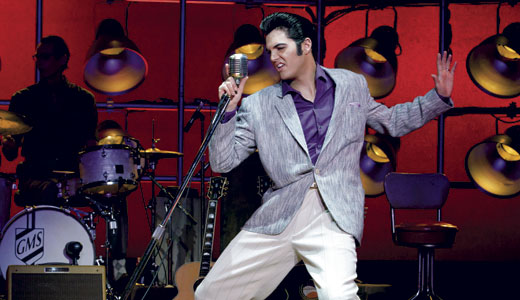 This singer-songwriter’s seventh album, Manifestra, is self-released with recordings based around her touring band — but if you think that sounds like the formula for comfortable, familiar folk-pop, you don’t know Erin McKeown. There’s plenty of compelling intimacy in her catalog, but the new album emphasizes McKeown’s ability to set a veritable banquet of food for thought. The rhythms run the gamut here, and the layered sound is woven through horns, synths and guest vocalists. The lyrics are just as ambitious, including a co-write with perpetual journalist flashpoint Rachel Maddow. This is the second great album in a row from McKeown, and it shows her having fun while kicking ass. Expect an eclectic and electric set at Uncle Slayton’s. —T.E. Lyons

On Dec. 4, 1956, a group of guys met up at Sun Record Studios in Memphis. These guys popped in the studio by chance that day, and since all were musicians, they decided to pick up their instruments and have an impromptu jam session. This once-in-a-lifetime meeting was termed the “Million Dollar Quartet” because the guys just so happened to be Elvis Presley, Jerry Lee Lewis, Johnny Cash and Carl Perkins. Luckily, the sound guy, Cowboy Jack Clement, pushed the record button, and the local newspaper snapped the famous picture that shows them huddled around the piano where Elvis is sitting. History was made, and so was this musical, which depicts that Tuesday afternoon. It’s here through Sunday as part of the PNC Broadway in Louisville series. Songs include “Blue Suede Shoes,” “Great Balls of Fire,” “Folsom Prison Blues,” “Hound Dog” and more. —Sara Havens

U of L Playhouse Theatre

First performed entirely by the writer, Eve Ensler, in 1996, “The Vagina Monologues” sparked a revolution amidst the controversy of its subject matter. Today, it is the centerpiece for V-Day, a nonprofit organization and global movement to end violence against women. This year it’s part of U of L’s weeklong “One Billion Rising,” appropriately scheduled during the week of Valentine’s Day. Guest actresses and students will perform scenes such as “My Vagina Was a Village” and “Because He Liked to Look at It,” with the intent of encouraging female empowerment. So regardless of whether you have a vagina, U of L’s performance of “The Vagina Monologues” promises to be a celebration of women’s strength, told in the voices of hopeful women young and old. —Natalie French

Peter Brötzmann has been a defiant giant of improvised music for decades. To label it as “jazz” would be much too limiting; he’s also made some of the heaviest noise known to humankind along the way. Friday, the Louisville Film Society’s Dreamland Film Center will present two screenings of “Soldier of the Road: A Portrait of Peter Brötzmann,” co-presented by the adventurous Astro Black record store. The documentary was filmed by Gerard Rouy, a photojournalist who has been examining Brötzmann’s work since the 1970s. The doc also includes appearances by notable collaborators like Han Bennink, Mats Gustaffson, Evan Parker, Ken Vandermark and more. A free after-show at Nachbar at 11 p.m. features younger avant-gardist Jason Ajemian performing with Tim Barnes, Jim Marlowe and Jordan Richardson. —Peter Berkowitz

Forty percent of the Africans sent to the Americas during the slave trade landed in colonial Brazil. The 1986 film “Quilombo” tells the story of a group of them who escaped to form a remote settlement in the hinterlands and fight off their Portuguese masters. The Palmares, as they were known, went on to become an autonomous republic, peaking at 20,000 members before ultimately being suppressed in 1694. The Kentucky Center for African American Heritage will present “Quilombo” (Feb. 15) as part of a Black History Month film series. “The Last Supper,” a 1976 Cuban film, will also be shown (Feb. 22). In it, a plantation owner attempts to direct 12 of his slaves in his own rendition of Jesus’ last supper. — J. Christian Walsh

Gallery at the Brown

The Brown Hotel is a magnificent structure that’s a member of the Historic Hotels of America and on the National Register of Historic Places. That doesn’t mean it can’t be hip, happening and now. The minds behind the Gallery at the Brown decided to spin things around a bit and show contemporary art. “We’ve done a lot of classic art shows in the past with equestrian and landscape themes,” says new gallery manager Talia Piccini. “For this show, I wanted (to) focus on local artists working in the abstract style who could bring a new group of art lovers into the gallery.” The exhibit features 11 local artists, including Aron Conaway, Chris Chappell and guest curator Keith Linton. Friday’s opening reception is from 6-9 p.m. —Jo Anne Triplett

Normally you find clouds by looking up at the sky. Not so with Dutch artist Berndnaut Smilde, who creates them as temporary art installations. It’s quite a coup that LOT is hosting Smilde in his first solo exhibition in America, and where he will be creating his next cloud “sculpture.” “You could see the cloud as a sign of misfortune,” Smilde says. “You could also read it as an element out of the Dutch landscape paintings in a physical form in a classical museum hall. At the same time I wanted to make … a very clear image, an almost cliché and cartoon like visualization of having bad luck …” The opening reception is Friday beginning at 7 p.m. and will feature the Lexington group Italian Beaches. —Jo Anne Triplett

The Portland-based indie pop-rockers with one of the best names in the game almost didn’t make it to see another year on the road. Danny Seim and Justin Harris, friends since high school some 20 years ago, found their band at a crossroads when co-leader Brent Knopf decided to leave in 2011. The split had been coming for a while, and no one had been happy; songs were written separately, and weeks on the road had become increasingly tense and quiet as the old friends had moved in different directions. Still, the remaining duo decided to continue on as Menomena, and their latest album, the delightfully titled Moms, proves their decision was wise. A more lyrically mature (though musically playful) work, this Moms is worth a listen. —Peter Berkowitz

It’s Valentine week, and everyone should be packing into Headliners Sunday night, because the Old 97s are returning to show some love to Louisville. The guys will be spreading the seed of their folky blend of country, Southern rock and just old-fashioned rock from wall to wall. The band’s albums have been revered from mainstream to independent sources, but their live shows are almost unparalleled in a world of glossed-over posers. Lead singer Rhett Miller will also be pulling double duty, opening the show with a solo set before joining the band to pay tribute to the 15th anniversary of their roots-rock classic, Too Far to Care. —Brent Owen

Contrary to recent rumors suggesting Muhammad Ali “could be dead in days,” the legend is still very much alive … and what a life it’s been: Though professional boxing was his claim to fame, Ali’s dedication to philanthropy and social activism is perhaps the most impressive aspect of his legacy. The Ali Center is honoring its namesake through an exhibition entitled “The Greatest: A Fine Art Tribute to Muhammad Ali,” which consists of 22 contemporary art pieces by 19 artists from across the United States. The traveling showcase is part of an ongoing effort by the renowned Sacramento, Calif.-based Evolve Gallery, which seeks to shed light on the many facets of Ali’s life. In addition, local artists Corinne Pondell Holt and Josh Mitcham will display personal tributes to The Greatest. —Sarah Kelley