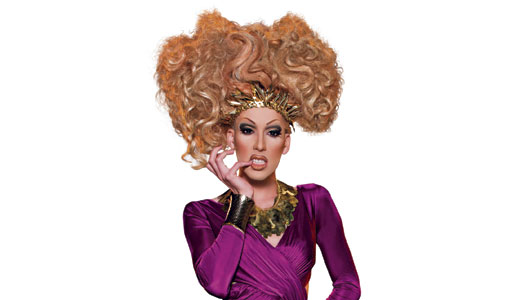 If you’re not already a fan of the best show on TV, “RuPaul’s Drag Race,” then you owe it to yourself to sample this live performance (and meet-and-greet) with one of the current stars of the competition showcase, Alaska Thunderfuck (known on TV simply as “Alaska,” for some childish reason). The night also includes sponsor Absolut Vodka (open bar from 10-11 p.m. if you buy the limited VIP tickets) and performances from The Diva Extreme: Syimone and DJ Prism. This is part of the monthly “Hard Candy” series, easily one of the best ongoing events in Louisville. So whether you’re loud and proud or like to peek in on the action through a hole, take a disco nap and then come on down — it’s going to be a late night. —Peter Berkowitz

When he wasn’t stowing himself away in an abbey, or running through love affairs, Franz Liszt aspired to become the “Paganini of the Piano.” It was an ambition he was able to achieve, stepping onto 19th century European concert stages as the premier pianist of his age. The performer was also a fine Romantic composer, but his best-known work is the “Piano Concerto No. 1” — which, of course, he performed himself. Pianist Christopher Taylor appears with the Louisville Orchestra Thursday and Friday in Whitney Hall, performing the Liszt concerto, long an audience favorite. Musical director Jorge Mester later leads the orchestra in Beethoven’s dramatic “Symphony No. 7.” As with all of Beethoven’s odd-numbered symphonies, the “Seventh” is a grand musical sweep, especially noted for its building rhythms. —Bill Doolittle

Hip-hop has finally found its sense of humor again. After years of taking itself entirely too seriously (remember 50 getting stabbed over a parody song right before he got big?), a handful of emcees have decided to have fun and just talk shit over loud beats. Trinidad James, currently battling teenager Chief Keef for the title of rap’s clown prince, ran the Internet this winter via his sweat-drenched Molly-popping and caused much despair and rumors of lawsuits based on his character’s similarity to “Martin”’s Jerome. It’s best not to over-think it; if you do, you’ll blow a gasket. There are plenty of things today that make me want to turn into Huey Freeman. Trinidad James? Just turn it up or turn it off. —Damien McPherson

It won a LEO Readers’ Choice award in 2011 for Best Theatrical Production, and now it’s back in case you missed it or want to see it again. Written by Bard’s Town artistic director and playwright-in-residence Doug Schutte and performed by members of the Bard’s Town ensemble, “Chasing Ophelia” is a story of love that is found, lost and chased after. In this piece, we learn what happens to fictional characters whose stories were never finished — those forced to wander the blank pages and figure out who they are and where they belong. Ugh, sounds kind of like real life, doesn’t it? Join Ned Mark as he pursues the love of his life, another displaced character who thinks she’s a creation of the Bard himself. —Jane Mattingly

For those who enjoy putting pen to paper (or tapping away at a keyboard), the mic is open and awaiting your words at the next Speak Social Reading Series. Launched in June 2012, this series offers burgeoning local writers an opportunity to share their craft in front of an audience of like-minded creative types. In addition, the event features accomplished authors who share excerpts from their published works. On deck for Friday’s reading is Cincinnati writer Matt Hart, author of four collections of poetry, as well as Louisville native Patrick Wensink, bestselling author of “Broken Piano for President.” The live literary fun starts at 7:30, with sign-ups beginning at 7. Java will offer a variety of drink specials throughout the evening — and yes, the beer and wine will be flowing for those in need of more than a caffeine boost. —Sarah Kelley

If you want something a bit unconventional this Friday, Ford Theatre Reunion has just the show for you. Like a vaudeville punk band with Tom Waits and an old-timey Florence Welch singing, you can expect the unexpected. Hailing from Lexington, Ford Theatre Reunion have plenty in their musical arsenal, from horns, strings and accordions to the traditional rock trappings of guitar, bass and drums; the ensemble cast switch genres at a whim. Storytellers above all, Ford Theatre Reunion engages their audience throughout their performance. It makes sense then that Madame Machine, featuring a veteran of Louisville ensemble act Lucky Pineapple, will return from a short winter hibernation with their ’80s-inflected post-punk. Topping the bill are the War guitar, keyboards and drums power-prog trio of Asm A Tic, who create an impressive and intimidating sonic spectacle. —Syd Bishop

The Russian National Orchestra began 2013 by playing hometown Moscow. But the ensemble soon escaped the Russian winter and, in February, performs in California, Kentucky and Florida. In May, it’s Italy and Spain. July finds the orchestra in residence at the Napa Valley Festival del Sole. Then it’s Switzerland in August and Paris in October. A pretty good gig. And a darned-fine orchestra that appears Saturday night in Whitney Hall. After opening with Smetana’s “Overture from The Bartered Bride,” young Russian phenom Daniil Trifonov plunges into Prokofiev’s “Piano Concerto No. 3.” The Russian orchestra concludes with Tchaikovsky, of course. The emotional composer completed his “Symphony No. 4” in 1878 and dedicated it to his patroness, Madame von Meek, with whom he carried on a 13-year love affair — entirely through letters. The pair never met in person. —Bill Doolittle

Masks are to parties like open is to bar. And all four components equal a guaranteed good time. Pandora Productions is hosting its annual Masquerade Fire & Ice Gala, which is a benefit for the local theater company. Along with appetizers and live music by Robbie Bartlett and DJ Sleepy T, the party will feature a silent auction of decorative masks made by local artists, an open bar and a performance by Penny Tration from “RuPaul’s Drag Race.” If you get your ticket ahead of time, it’s only $50 — and let’s face it, that’s your average bar tab on a Saturday night, isn’t it? If you include dinner? So put up the money and dance for a good cause. —Sara Havens

Moving Collective presents its 15th performance of modern dance in Louisville, aptly titled “Stories Gathered.” A collaborative work of six Ohio Valley choreographers, “Stories Gathered” explores biblical themes, the process of growth and emergence, and a journey into the unknown. While this is a dance concert, dance is only a fraction of the experience. Choreographer Danah Bella took it upon herself to explore the use of light and music. Her contribution, “In the Memory of Hope,” includes motion and sound sensors, so the lighting and atmosphere will change from performance to performance, responding to the movements of each dancer. Moving Collective prides itself on contemporary dance, but now it has another achievement to add to its list of bragging rights: successful experimentation with the art of performance. —Natalie French

Non-Western art intrigues us because, as Westerners, they give us glimpses into other worlds. U of L is showing more than 100 works in textiles, metal and other media from the collection of Gray Henry, director of Fons Vitae Press, a publishing house for scholarly and spiritual texts. She comes by this vast collection from her interest in traditional Islamic cultures fostered by her family’s long residence in Egypt. The exhibition is a collaboration between U of L’s Middle East and Islamic Studies, Fine Arts, and Anthropology departments and was co-curated by anthropology professors Anita Harris and Julie Peteet. It includes many examples of Islamic art, such as calligraphy, geometrical ornamentation, arabesque and floral themes. —Jo Anne Triplett

The Wu Tang affiliate with the most valid claim to actual Clansmanship, Cappadonna may be more known now for his mid-decade slide from major label releases to driving a taxi. Shortly after that, though, Cap started his career over again, this time in the indie realm and the blue-collar industry of the rap also-ran. That’s not an insult; not everyone’s going to make Dre money. That Cappadonna is close to the end of his second decade in music is something few people will ever realize. His appearance celebrates the release of his latest album, a double-disc effort, and the first of two planned releases for 2013. If he can at least match the surprisingly high quality of his last, The Pilgrimage, with Eyrth, Wynd & Fyre, making the trip out Tuesday is a fare worth paying for. —Damien McPherson

The Kentucky Museum of Art and Craft and Aegis, U of L’s graduate student association, have teamed up to present an exhibition and symposium discussing the distinctions between craft and fine art. “Art. Craft. At some point in history, a hierarchical distinction was made between these two terms,” say the Aegis curators. “While both are used to describe an object created by a skilled person, craft is often allocated to functional products that seemingly lack the creativity of art.” The Aegis symposium is Saturday. In addition to student presentations, the keynote speaker will be Lydia Matthews, from Parsons, The New School for Design in New York City, who will discuss “Craft Matters: Exchanging Knowledge in the Wake of Globalization.” It’s free and open to the public, but registration is required. —Jo Anne Triplett