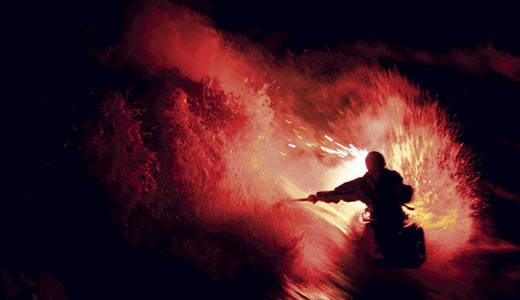 Drummer Sunny Jain began to make his mark with jazz peers including Rudresh Mahanthappa and Vijay Iyer, but he left that world to found Red Baraat, self-described as the “first and only dhol ‘n’ brass band in North America.” The dhol is a long, two-headed drum worn over the shoulder, and Jain uses it to ignite danceable rhythms with two other drummers and five horn players. Jain has said he was influenced by the music at a baraat, a wedding party, and the result is a hybrid of Indian music and New Orleans marching bands, with some rap thrown in to further the musical cross-fertilization. Red Baraat is touring in support of a new studio album, Shruggy Ji. Appalatin opens with their rhythmic fusion of Appalachian and Latin sounds. —Martin Z. Kasdan Jr.

We know about Hitler and the Nazis, and we know of the horrors that took place in the concentration camps. Lillian Groag’s “The White Rose” focuses on a side of World War II that isn’t as familiar — the civil disobedience demonstrated by University of Munich students in 1942-1943, and, appropriately, the U of L Department of Theatre Arts is bringing it to the stage. Regardless of whether they get much attention, college students are known for joining together and protesting global issues. “Good plays using history are always about the present,” says director Russ Vandenbroucke. “Here we have the classic conflict between moral convictions of young people and the defense of the status quo by the state.” —Jane Mattingly

This event compels me to attend in the same way the Kentucky State Fair does — I don’t know what I’ll see, but it’ll probably be worth going. Land of Tomorrow Gallery is doing a one-night-only pop-up event showcasing the work of a handful of emerging performance and visual artists. The exhibition announcement mentions it will “encapsulate a number of parallel dialogues pertaining to the plasticity of space, ephemeral phenomena and art as artifact and decay.” I don’t really know what to expect from that, but I think it’s going to be weird. And as someone born and bred in middle America, I can always use a little more of that. —Chelsea Gifford

Living up to the serenity promised in their name, Brooklyn drone/ambient duo Mountains are playing a free show at KMAC. Comprised of the duo of Koen Holtkamp and Brendon Anderegg, Mountains’ music is austere in its beauty, seamlessly blending subtle guitar work with warm synth tones to create a hypnotic sonic landscape. Their newest album, Centralia, was recently released by Thrill Jockey and somehow manages to lull while it simultaneously transfixes. Intentionally created and compiled over a substantial course of time, Mountains’ recording process reflects their philosophy that anything good is worth waiting for, be that a physical product or an artistic flourish. Expect visual accompaniment for the duo, including the Holtkamp-crafted and strangely calming video for “The Living Lens,” which features backward imagery of flames and sparks at glacially slow speeds. —Syd Bishop

With all due respect to John Gillis (aka Jack White), the White Stripes were one of 30 garage rock-punk bands in Detroit in the ’90s, and one reason why he chose to move to Nashville instead of Memphis was because Memphis is too similar to Detroit, a ’68 Comeback that never ended. True Sons of Thunder is a “spoonful of seedy dudes,” a Memphis band made up of some players known to longtime fans of underground rock. Leader Eric Friedl was in The Oblivians and owns Goner Records; he discovered Jay Reatard, Ty Segall and The Donnas. Joe Simpson, Abe White, Richard Martin and Sambeaux complete the band’s line-up. Also performing are two even more sloppy and wild openers, one-man-band J. Marinelli and Hazard’s notorious Globsters. —Peter Berkowitz

“Romeo and Juliet,” one of literature’s great “my family doesn’t like you” couples, is coming back to the Louisville Ballet. This romantic dance is a classic for them in every sense of the word. First performed in 1985, it features choreography by former artistic director Alun Jones with assistance by former co-artistic director/principal dancer Helen Starr. They are beloved, with Jones receiving the Kentucky Arts Council’s Milner Award in 1998. There’ll be plenty of people on the stage: 24 Louisville Ballet dancers, including Natalia Ashikhmina (Juliet) and Ben Needham-Wood (Romeo), 13 trainees, and more than 40 people from around the city. Anytime you see a credit for fight choreography, in this case by Dale Brannon, plus that many people in a cast, you’ve got to know all hell breaks loose. —Jo Anne Triplett

Amy Murphy and Michael Rivers met at an inconsequential bar on an inconsequential night, a chance meeting that grew to be a thoroughly creative relationship. The collaborative works of Murphy and Rivers have been anything but inconsequential, and their new exhibit, “West,” chronicles their journey through — you guessed it — the West. “We spent half our trip camping,” says Rivers, and this rural, natural setting shows not only in the photographs, but in the very foundations of the exhibit: Each frame was handmade, stained and colored with coffee; each photo was printed by Murphy and Rivers personally. Together, Murphy and Rivers have worked to create an environment suited to satisfy their wanderlust — and to inspire others to fulfill their own. —Natalie French

Graphic designer Brendan P. Kennedy has a respect for beer, more so than your average happy hour barfly. Beer has permeated his art, and now he presents the exhibit “Beer,” which is up at Ultra Pop all month long. The collection features digital prints depicting vintage beer cans from the region. “I have a nostalgic connection with beer and old flat-top cans, more specifically,” he says. “As a designer, it’s always interesting to compare fonts, colors, layout and wording on the older cans to the same brands still in production.” Kennedy says his favorite beer is a Bell’s Two-Hearted, but he’s recently discovered Lexington’s West Sixth IPA. The opening reception Friday is from 7-10 p.m., and I’m betting there will be more than just the two-dimensional beers. —Sara Havens

Tom Fitzgerald, executive director of the Kentucky Resources Council, will emcee a screening of six films focused on environmental issues at the fifth annual Wild & Scenic Film Festival in the Clifton Center’s Eifler Theatre. From “Wonder,” which follows a couple as they build their own home and live without the aid of any modern convenience, to “Let Our Rivers Flow,” which portrays the history and present plight of Maryland’s key eastern shore rivers, each film will aim to inspire viewers to make a difference in the environment. A VIP reception will be held before the festival at 6 p.m., which will include local beverages and fare, along with a raffle to win a kayaking trip courtesy of Quest Outdoors. And hey, at the very least, this film festival will provide a nice preview of spring. —Kevin Gibson

Matmos are a highly overeducated yet delightfully playful duo who have added much to the vocabulary of experimental, electronic, art and dance music throughout the past 20 years. In that time, the now-Baltimore-based couple, Louisville native (and early scene contributor) Drew Daniel and M.C. Schmidt, has collaborated with Bjork, visual artists, choreographers, playwrights and Rachel’s; recent albums have included mind-control experiments and the sounds of liposuction surgery. Their music is fun and appropriate for a Saturday night out at Zanzabar, which is a true testimonial to their skills. Presented by Cropped Out and The Other Side of Life, with avant-rockers and fellow Baltimorans Horse Lords and locals Parlour (the latter of which has added two new members, on drums and synths). —Peter Berkowitz

Brad Devlin has a great studio full of what most of us consider discards. But from those mass-produced items (i.e. trash) comes wonderful art. Galerie Hertz owner Billy Hertz certainly thinks so: “Devlin’s work continues to raise the bar on what is to be expected in multimedia work and will help to continue (to) draw more national attention to Louisville.” Devlin’s latest exhibition, based on water, couples ocean maps with geometric objects and colorful pool tiles. He explains: “Unifying elements — (such as) water, rings, the Richard Diebenkorn/Ocean Park-inspired weighted square, the plane-bisecting vertical, images or maps behind Plexiglass, or the sometimes exacting quest to bring disparate elements and materials onto, and into, the same plane — appeal to me and they allow inspiration to grow out of improvisation.” —Jo Anne Triplett

Vandana Shiva is a woman of many talents, from physicist and philosopher to global environmentalist and feminist activist. The published author, teacher and public speaker will share her expertise on a handful of interrelated topics that fall under the umbrella of “eco-feminism” during a forum entitled “Violent Economic ‘Reform’ and the Growing Violence Against Women.” Specifically, Shiva will discuss connections between feminist issues and harmful food-production policies worldwide. One such example is the rise of agribusiness and urban migration in India, which Shiva proposes should be halted via a return to farming practices that benefit women. A reception will follow the discussion, which U of L’s Women and Gender Studies Department is hosting in conjunction with Women’s History Month. —Sarah Kelley