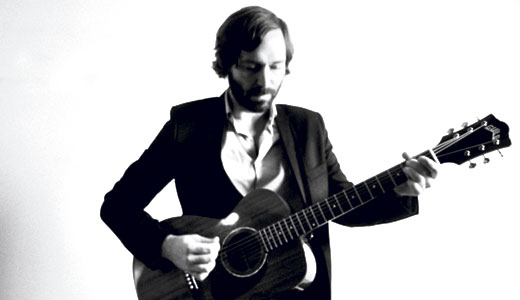 A few days before Christmas, indie-rocker Matt Pond calls me from St. Augustine, Fla. He’s mending. Last year, he broke his leg at the start of a tour and played dozens of shows perched on a stool, singing and strumming along with his band. The experience was uncomfortable, and Pond doesn’t want to repeat it. Ever.

“I’d like to not sit down next time I play some rock ’n’ roll shows,” he says.

Pond, a Brooklyn resident, also confesses he’s in Florida because of a girlfriend he has stashed there. (“That happened, too,” he says. “You can’t avoid the opposite sex.”) But it’s not all play and no work. Pond is busy rehearsing with longtime collaborator/guitarist Chris Hansen for a six-week tour.

Pond might have to wear earplugs this time. His ninth and latest album, The Lives Inside the Lines in Your Hand, is a much louder, amplifiers-cranked, rockin’ affair, compared to his previous work.

There’s also more optimism. Pond could hardly be categorized as depressive or navel-gazing, but his new songs display a pronounced shift in perspective, offering moments of glimmering transcendence. Opening track “Let Me Live” is a hard-driving plea for inclusion in a distant lover’s heart, while the next track, “Love to Get Used,” is a kickdrum-pounding anthem celebrating the desire to be desired, to be sexually consumed and exhausted. Let’s hang on to abandon, sings Pond. Let’s hope we lose control/To be out in the open, baby/And let go of the rope.

“There’s a lot more wildness, sure,” Pond says of his new material. “I don’t consider myself a folky singer/songwriter, though I write songs and sing them. The concept was I want to be able to not be cynical someday. I don’t want to sit in my misery; I want to find truth. This was my way of having no fear. You know, without buying a (‘No Fear’) bumper sticker for my car.”

Pond has shed more than pessimism. He also dropped the PA abbreviation from his stage name. But he squirms if you call this latest effort his first proper solo disc.

“To say this is a solo album is to say they all were. I got rid of vestigial letters. They were harder to explain since I hadn’t lived in Philadelphia for 10 years. It was like an old tattoo I didn’t like anymore. But (Lives) isn’t a solo record. The album is larger than that, with contributions from many people.”

Pond also realizes adopting a buoyant attitude doesn’t mean everyone will follow suit. He laughingly bristles at my question: How much shit did you get for licensing your song “Snow Day” to Starbucks two years ago?

“Tons,” he says. “People email me complaining about a PBR I happen to be drinking in a photo somewhere. For some reason, as an artist, you’re a target. All you need is a website, and people claiming to be your fans will write in criticizing.

“Starbucks employs a bunch of people,” he continues, “and you can insinuate evil into it if you want. I didn’t write the song to make a dime. But if it makes a dime, I can keep doing this. People aren’t buying music, The Shins did a McDonald’s commercial, so I don’t have demons left. Or they’re too tired to fight me anymore.”

Hard as it is for a rocker who’s not Lady Gaga to make a living, Pond has no regrets.

Speaking of snowy days, before Bon Iver made it cool for artists to lock themselves inside snowy remote cabins with no heat to write albums, Pond did just that. Does he feel isolation helps artists be creative?

with Jukebox the Ghost and The Lighthouse & the Whaler