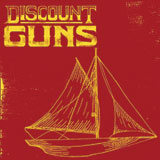 Frequently sounding like they’re in a hurry to beat back the other revival-rock bands in the region, Discount Guns can be credited with doing a fine job of breathing new life into not-unfamiliar sounds. As in debt to early ’70’s classic-rock groove bands as they are to today’s Black Keys and friends, the two men who make up Discount Guns issue a thick yet clear fog of riffs, defying anyone within earshot to not shake that ass. The occasional female backing vocal adds to the ambiance, as the DeadBird Studios team’s solid, steady production keeps this collection focused and crisp. Sounding familiar and occasionally provocative, Discount Guns are damn good at what they do, and that’s a surprisingly hard quality to find. So, guys, what’s next?