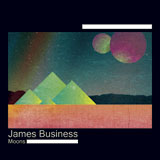 This is exactly the kind of evolution one wanted to hear on James Business’ second release. After the lo-fi bedroom feel of his first, Life Between Clocks, Business has clearly learned a lot. Moons fits in with the long line of ambient instrumental hip-hop for-a-lack-of-other-descriptors of Prefuse 73 and early Flying Lotus. The broken beats with samples chopped within an inch of recognition include lots of “Oh! That’s um, that, yeah …” moments and a fair amount of rewinding. Opener “Belt Loops” sounds like it lifts from “Valdez in the Country,” albeit chopped and screwed. This is a large part of the fun of Moons — it works both as a moody soundtrack as well as a game for music nerds. Let’s hope for more like this and an expansion of the Brainfeeder-esque vibes of “May Apple Trees.”