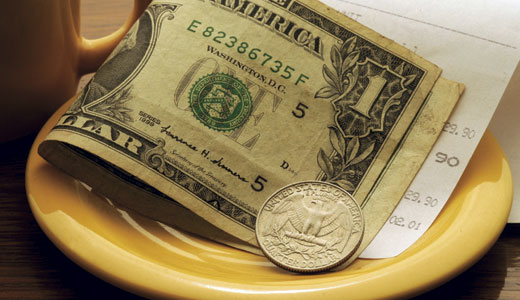 Apron Inc. is a local organization that helps restaurant workers “get out of the weeds” during times of financial crisis. In honor of the nonprofit’s first birthday — Apron turns 1 this week — let’s imagine what our local food economy might look like without the hard-working people this relief fund serves.

There’s a sheet pan of stagnant gravy looking more like an infinity pool at a bug resort. The flickering heat lamp above warms the wings of flies the size of lima beans. Hungry diners plod around this unattended buffet, searching in vain for utensils not crusted in lunches past. Hungry-breathed squabbles quickly devolve into shoves. Someone starts a trashcan fire. One patron, deliriously famished, spends his evening walking into walls, mumbling, “Check, please. Check, please.” His calls, of course, go unanswered.

This culinary purgatory is perhaps a bit overcooked, but what would our local food economy be without those who make restaurants go? I began asking this question during “tip-gate” and the subsequent shuttering of Lynn’s Paradise Café last month. Scanning the long threads on social media that this winner-less story generated (some comment sections went deep into triple-digits, a good share decidedly not pro-server), I also began to wonder whether we fully appreciate the work restaurant people do.

The Lynn’s story coincided with the growing phenomenon of “sorry, no tip” photos popping up on sites like Reddit.com. Last month, for example, an Applebee’s server was fired for outing a St. Louis pastor who wrote on the gratuity line of a credit card receipt: “I give God 10%, why do you get 18?”

“This is the only profession in the world where the customer decides how much money you’re going to make,” says Gary Fox, president of the board of directors at Apron Inc. “Once in a while, there’ll be a Hot Bytes thread about tipping, and for some, it’s like, if you put too much ice in their soda, they think they own you! This is odd, because most in the independent restaurant community take absolute pride in what they do and in the food they serve. I think that needs to be rewarded.”

Fox, a former soap opera actor/New York waiter who retired to Louisville only to “hear the call again,” reports that Lynn’s employees were taken care of by the restaurant in the waning days of the business and that Apron did not need to intervene. He adds that despite the small minority of waiter-haters who turn up online, the food scene in Louisville is incredibly tight knit and supportive.

Service industry nights at places like The Silver Dollar, Varanese and Against the Grain are indicative of this. So is the response Fox has seen to his own organization, both in the form of donations and testimonials from restaurant staffers helped by the service.

“Apron swooped in like a guardian angel and took care of our rent and utilities,” says an area waitress after her life was flipped upside down by an ectopic pregnancy. “Our world is sometimes not a nice place or kind to its people. Apron sets the standard to be a human and giving.”

Since taking his job as a server at Equus and becoming president of the board at Apron, Fox says he’s been shocked by the number of people who have flocked to help establish the 501 (c) (3), starting with his employer, Dean Corbett. Corbett, who knows what it is to fight his way out of the weeds, has been a big backer of Apron, contributing their seed money and issuing challenges to other restaurants to get behind the organization.

This may explain the 25 chefs who showed up at Apron’s first fundraiser to lend their talents to a “taste of” benefit. Another unexpected supporter is Four Roses Distillery and the Kentucky Chapter of the U.S. Bartenders Guild, who recently selected a barrel of bourbon named in honor of the organization.

Sales of the whiskey will benefit Apron, which was modeled after the Musicians Emergency Response Fund, founded here in Louisville in 1981.

Asked for his appeal to the hypothetical waiter-hater unconvinced of the need for a service like Apron’s, Fox replies, “These people work very hard. They are family members with children. They have all sorts of challenges, and most don’t have insurance. Apron is a great way to say thank you to the people who bring you your food on a daily basis. The people who cook your food and sweep the floors in the places you eat. This is a wonderful way to participate in this vibrant, restaurant community that Louisville has.”

Apron Inc. is currently looking for restaurant staff to serve as in-house liaisons. For more information, or to apply for a relief grant (or make a donation,) visit aproninc.org.