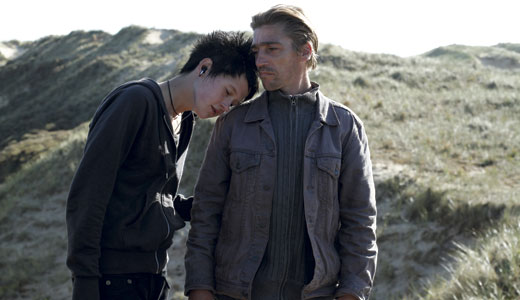 The University of Louisville’s Floyd Theatre is hosting a variety of French language films, which continues this week with the stylish and heartwarming “Le Havre.” A winner at multiple international fests, including Cannes, this typically deadpan Aki Kaurismäki flick follows an elderly shoe shiner in the days following his wife’s mysterious illness. During this period, Marcel decides to harbor Idrissa, an African boy on the run from immigration in the French port city that is also the film’s namesake.

The festival organizers call the film a “celebration of France’s national motto — liberty, equality, fraternity,” and, like all of the 35mm presentations in this series, the three showings of “Le Havre” are sans frais, or free of charge. Following Thursday’s 5 p.m. screening, Tracy Heightchew from the Louisville Film Society will lead a discussion on the film and Kaurismäki’s previous work.

The festival beats on next week with a Valentine’s Day edition — that is “Un Amour de Jeunesse” (“Goodbye First Love”) and a special menu from U of L’s Damon’s Grill. Directed by Mia Hansen-Love, “Goodbye First Love” covers an eight-year, on-again/off-again relationship between Camille and Sullivan. The affair starts convincingly with the tortured, jelly-legged stages of adolescent love, warming up again years later when world traveler Sullivan returns to Paris. The complication: Camille is now in a committed relationship with her former teacher and current employer, Lorenz.

Later this month, the controversial art house film “Hors Satan” (“Outside Satan”) will have its regional premiere at the Floyd. Variety described it as “another WTF film from writer/director Bruno Dumont,” and the picture does seem designed to confound. The spacious and plodding tempo of the film, as well as its central character — a moody, guardian angel drifter with a bloodlust — is both unnerving and maddening. The sweeping seaside vistas and rich photography help “Hors Satan” achieve a comfortable numbness.

Tournées 2013 closes with “Tomboy,” the fascinating character study of 10-year-old Laure, who decides to be known as Mickael after relocating to a new town with her family during summer break. Zoe Heran, the androgynous young actress who portrays Laure/Mickael, is intriguing in those non-verbal scenes where she observes boys doing boy stuff, then mimics their actions: spitting, removing her shirt while playing basketball, etc. “Tomboy” offers a brave new look at transgenderism and how it effects the young.

Each of the films in the Tournées collection will show three times and include one post-screening discussion. Following the Feb. 28 screening of “Tomboy,” Kaila Story, professor of Women’s and Gender Studies, and Audre Lorde, chair of Race, Class, Gender, and Sexuality Studies at U of L, will lead a discussion on the film.