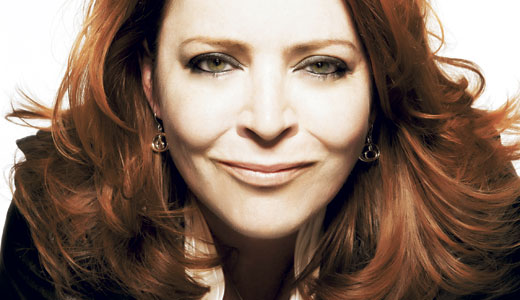 Kathleen Madigan is a tried and true road warrior at the top of her game since breaking into the mainstream public consciousness on NBC’s “Last Comic Standing.” Since that time, she’s appeared on every major talk show you can think of, shot two DVDs, had two half-hour specials and done countless U.S.O. shows for the troops at home and abroad. Madigan took time to chat with us about her career and returning to the South.

LEO: It’s been a while since you’ve been to Louisville. Anything you like doing when you’re here?
Kathleen Madigan: Actually, I just love being in the South — Kentucky, Tennessee, North Carolina — for their barbecue. But honestly, one Irish pub looks like the next one after a while. Maybe that makes me sound like a good ol’ drunk, but I’m from Missouri. Kentucky reminds me of Missouri, but prettier. I like it.

LEO: Irish pubs? Is that the seven Irish Catholic brothers and sisters coming out in you?
KM: Yes! Exactly!

LEO: Early on, who were the comedians who influenced you?
KM: Once I got out into the clubs, it was mostly the people who were headliners in the clubs I was just starting out in. Guys like Lewis Black, Ron White, Roseanne; those people were already capable of doing an hour-plus in a club. So when I got to work with them, that’s who would blow my mind.

LEO: What was your “Last Comic Standing” experience like?
KM: Well, I think the result was good; the process was bad. It was a wasted opportunity. They started out with 13 million viewers, and then they kept making the show progressively worse with bad-producing decision after bad-producing decision. And as a result, the show became what it shouldn’t have been instead of what it could’ve been. The first two seasons, they put on people who were just great comics, but after that, they were just putting good-looking people on there.

LEO: After Season 2, Ralphie May never would’ve made it?
KM: Yeah, I was sitting in meetings with producers who were saying things like, “She’s not hot enough,” or “He’s too old …” Of course he’s old! That’s why he’s so good at this! That’s how it works! You spend years doing this before you get good. It’s not like an 18-year-old who works at the post office that can naturally sing; even if you’re a funny person, you have to go out there and fix it and get better. So it really was a shame what they did to what could’ve been a great show.

LEO: How did your work with the U.S.O. affect your life?
KM: Well, I did a bunch of the U.S.O. things at home, and then Lewis Black tricked me into going to Iraq and Afghanistan. If you go to a base here, everything seems pretty tidy and well done. But when you go to Afghanistan to some operating base and you see how things can get very weird, you appreciate the military so much. So I will continue to do free shows for the military to keep them happy, as long as they keep signing up to do a job I have absolutely no interest in doing myself.