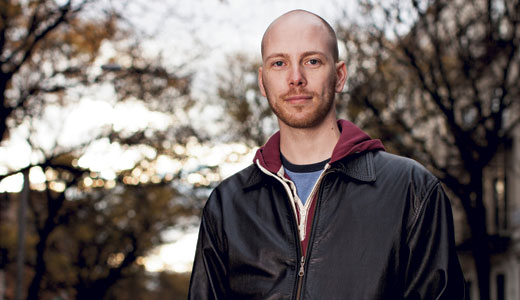 As the only full-time U.S. journalist to cover the 2010 Haiti earthquake as it was happening, Associated Press reporter and Louisville native Jonathan Katz witnessed the chaos that killed more than 300,000 people and left millions more destitute. In his new book, “The Big Truck That Went By: How the World Came to Save Haiti and Left behind a Disaster,” Katz chronicles the tumultuous international recovery efforts that have, he says, left the Latin American island in shambles while U.S. agricultural interests have profited handsomely, meanwhile ignoring the very Haitians the world was ostensibly trying to save. In the aftermath, many Haitians wound up as refugees around the globe, including Louisville.

Presented by the World Affairs Council of Kentucky & Southern Indiana, Katz will be in town this week for two readings/signings. LEO caught up with Katz to talk about the current status of America’s Caribbean neighbor.

LEO: In terms of recovery, where is Haiti today?
Jonathan Katz: Somewhere between the Dominican Republic and Cuba. It is unfortunately basically in the same place, in terms of its underlying vital signs right before the earthquake struck. There are still scars from the catastrophe that are visible. The parliament still hasn’t been replaced. Their equivalent of the Supreme Court hasn’t been replaced. To a large extent, in terms of the place itself, by now … most of the rubble has been cleared. You certainly don’t see bodies in the streets anymore, but the idea was “to build back better” from the disaster. That was the idea that was put forward by Bill Clinton and Hillary Clinton at the donor’s conference at the United Nations in 2010. It was actually a phrase used before the earthquake, that Haiti was supposed to have “built back better” from the tropical storms that had hit it in late 2008, and sadly that really hasn’t happened.

LEO: Would you say part of the reason is that international response failed?
JK: We often have a sense in this country that it’s up to us and it’s in our power to go to other parts of the world and fix them. The idea that what’s needed is for us to come in and apply the changes that need to be applied; that if people would just do what we say, their lives would get better. That’s part of what scuttled the reconstruction from the beginning. And part of the reason why is, despite the effort and money that’s been spent, Haiti’s situation hasn’t markedly improved. It needs to be a partnership, and it really needs to be a partnership that’s led by the people who live in these countries.

From the beginning, one of the problems has been that the responders from the wealthy outside nations came in with their own plans and their own designs and didn’t listen to the Haitians. By the same token, there has been a failure by … Haiti’s own government to assert itself in the best interest of its people, but I would argue that it’s really been doing so from the beginning with its hand tied behind its back. In some ways, all of Haitian history leading up to the earthquake, the Haitian government and Haitian leadership have been undermined both by direct interference from the outside and then by the withering of the state by the tendency of major foreign governments such as the United States to go around the Haitian government and finance its own (non-governmental organizations) and agencies.

LEO: In the immediate aftermath of the quake, charity efforts became a national zeitgeist that quickly burned out. Are we guilty of forgetting too quickly, or is it arrogant to think our prolonged attention could somehow change the outcome for the better?
JK: Oh, yeah. That’s highly American to think that it’s solely our attention that can make things better; that our attention will somehow inextricably make things better. And that’s part of the problem. I want to be careful, because when you call people arrogant when they’re acting out of a good will, they can rightly be insulted. But these two things tend to go together. It’s very easy to look at people who don’t have (a lot of) things and assume you know something that they don’t. It really ignores the reality of this relationship. If we really want things to improve for Haiti, then we’re going to have a hard conversation with ourselves about what the things are that we do in our lives (as consumers) that contribute to these horrible situations.