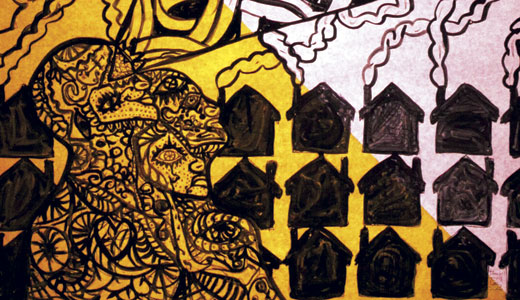 While change is inevitable, that doesn’t mean we don’t hate it, with plans to go kicking and screaming into the night. When the Louisville Visual Art Association announced last year that they had to move out of the Water Tower building, their home for 32 years, there was a collective sigh and sympathy for Kentucky’s oldest arts organization. While it was hit or miss as a gallery space, the building’s placement between River Road and the banks of the Ohio River was ideal.

After relocating their business offices downtown at 609 W. Main St., the hunt was on to find suitable classroom and gallery space. The Clifton Center at 2117 Payne St. solved the classroom problem. As for the gallery, they traded pastoral beauty for city charm; their new PUBLIC Gallery is located in the renovated section of Whiskey Row at Second and Main streets.

The 1,600-square-foot rectangular space is considerably smaller that what LVAA is used to, but the exposed brick and wood floors add instant warmth. It doesn’t hurt to be on the First Friday Trolley Hop route either.

Many of the pieces are on Duratrans, a film-like transparency. The light from the box illuminates the art, which works well for some but lessens others.

The “Common absence” digital photograph by Biesel and Smith is a natural for this kind of infused illumination, as the background features a house lit from within. Tree branches cover the windows and loom even larger in the foreground.

Hudson’s geometric chromagraphic print “Public (Space)” is given added dimension from the lighting, making the white thick and thin rectangles float above the colored background. The same goes for Lee’s “The Community” drawing of India ink on Mylar; the light adds depth and would be missed if not there.

A painting, such as the acrylic-and-ink “Public Space” created by Schuster, doesn’t fare as well. While the subject matter is a great example of how the word “public” is defined, the light doesn’t add anything to the realist Market Street cityscape.

An addition to the exhibition is the video installation “Hold It” by Cozzens. Although it doesn’t use a light box, the project has the required elements of “light” and “public.” Images of people holding their breath are projected on an exterior window so they can be seen from the Main Street sidewalk. They’re best viewed at night.