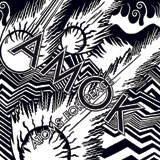 It seems like Thom Yorke is a pretty polarizing personality in music. The general anti-Yorke consensus tends to address what people see as his air of pretention, a claim that can neither be directly validated or has anything to do with his music; maybe dude just likes weird music. If you enjoy what the Radiohead frontman has to offer, this is completely up your alley. At that, the Radiohead comparison is unavoidable. Despite a particularly pedigreed lineup that includes Flea, Joey Waronker and Nigel Godrich, it’s hard to hear anything that distinguishes this project from any other of Yorke’s. That isn’t to say this is forgettable or anything to pass on. With Amok, Atoms For Peace don’t reinvent the wheel, but it doesn’t sound like that’s what they wanted to do.