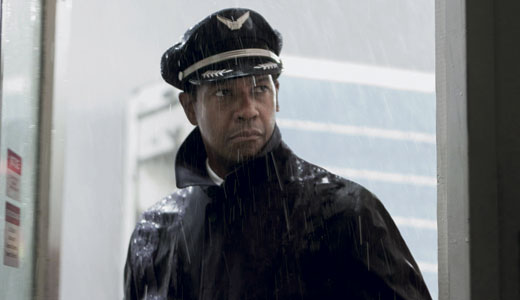 We’ve never been big fans of Tyler Perry, largely because of his arrogance. He truly believes he is the only writer/director with a handle on what the black filmgoer wants to see — but not anymore! Here he takes a James Patterson novel and tries to do it as a Denzel Washington-like action/shoot-’em-up with fairly hilarious results. As the titular homicide detective on the trail of a crazed serial killer (Matthew Fox), Perry seems so clearly out of his element that it’s actually painful. This is our favorite Perry film ever! Can’t wait for a sequel.

Denzel Washington stars in this simple “actor’s film” as the heroic airline pilot whose daredevil maneuver to save the 106 lives in his care succeeds despite all odds, miraculously losing only eight. But afterward, amid the accolades, it is discovered that he had a drink the night before taking the pilot’s seat, causing some to believe that the accident was actually caused by alcohol impairment. The very definition of “good, solid drama”; it reminded us of some of Jimmy Stewart’s best work. Recommended.

This week’s “Artsy American Euro-drama wannabe” offering finds four master musicians learning to deal with their leader’s Parkinson’s disease. And it doesn’t hurt that the four actors are Philip Seymour Hoffman, Catherine Keener, Mark Ivanir and Christopher Walken. To add spice to the mix, Hoffman and Keener are married and Ivanir is having a May/December affair with their daughter, Imogen Poots (which makes no sense whatsoever). But it’s all done in high style by consummate vets, wrapped up in some of the world’s greatest music. Enjoy.

Wow! What a scorcher! This would have been a respectable romcom in anybody’s book, but by focusing on two of the most breathtaking women we’ve ever seen — Barbara Niven and Jessica Clark — it takes on unexpected dimensions of power, fun and guile. Niven plays the older, well-heeled wife of John Heard, quietly unsatisfied with all her life provides. She eventually reveals her secret desires to Clark, a sultry young prostitute, but only after some of the funniest, most human and entertaining gettin’-to-know-you exercises ever filmed. Sexy, hot, fun, truthful, poignant and full of life; a masterpiece.

We often herald British dramas as vastly superior to our own, and this series is the perfect example. Imagine your favorite TV cop show, but with realistic blood, gore and disgustingly blue dead bodies. Then note that the police — flawed individuals beset with drinking problems, violent outbursts and poorly chosen sexual dalliances — don’t really have a clue, they’re just doing the best they can, even if that means breaking the law to find the killer. Created by author Lynda La Plante (“Trial and Retribution”) and starring sexy redheaded Kelly Reilly (“Sherlock Holmes”) and Ciarán Hinds (“Tinker Tailor Soldier Spy”), this is some of the best TV ever made.

Poor Kevin James. Since his hit TV show “King of Queens” went off the air, he’s been in a string of poorly performing comedies, unable to find his footing. You have to give him props for trying, like in this high-concept tale co-starring Henry Winkler and Salma Hayek. When fellow schoolteacher Winkler gets laid off, James tries to raise money as a mixed martial arts fighter (which he knows nothing about). Yes, he gets his ass handed to him, but gains the respect of the students and faculty, rallying everyone together. What can we say? We liked it!

Keanu Reeves narrates this fascinating doc about the rapidly changing nature of movies, and specifically how the inevitable change from actual film to digital recording, effects and projection affects both the industry and the moviegoer. A must-see for movie junkies, especially those of you obsessed with your damn smartphones.

Out-of-control minx Miley Cyrus trades her hair shock and boob tops for lower-maintenance accouterments in this silly “street smart private eye goes undercover in a college sorority for the FBI” nonsense. She’s there to protect one of the snooty spoiled debs (stunning hottie Lauren McKnight) whose father is about to squeal on The Mob. The damn-attractive cast includes Jeremy Piven, Kelly Osbourne and the mother-to-be of our children, Alexis Knapp. Big. Dumb. Fun.

A “babes turn the tables on their shallow, cheatin’ boyfriends” romcom starring an attractive, if not well-known, cast. Eddie Goines is “Prime Alexander” (ugh), a pro baller living the high life. The best of everything includes arm-candy Ingrid Clay as “Autumn” (ugh, again), though he has his sights set on Denyce Lawton (“Skylar,” do we have to say it?). But these women — and others tired of his testosterone-soaked posse — have had enough of the games and decide to band together for revenge. Not exactly light-hearted and upbeat, this is more down and dirty as both parties get in their licks, but it’s still a fun ride.

YOU MAY NOT KISS THE BRIDE

One seriously goofy and original romantic comedy you really need to see. Dave Annable, a quiet pet photographer, finds himself snared in an adventure after being forced to marry brown-eyed Croatian beauty Katherine McPhee (nice), then whisked away to a Tahitian paradise where she is abducted. And what a cast! Rob Schneider, Mena Suvari, Kathy Bates, Tia Carrere and other greats work to keep this appropriately shallow, sexy and silly. Flat-out fun.

A surprising adult comedy/drama about the perils of the choices we make, particularly the potential for disaster when two people marry too young. Rashida Jones and Andy Samberg, at the ripe old age of 30, find that their marriage is over; they are two completely different people with nothing left in common. So they passively decide to divorce and hope to remain friends. But that’s not gonna work either, is it?

A nicely crazy chase-flick/crime/family drama starring Eric Bana and Olivia Wilde as sibs on the run after failing to properly rob a casino. They accidentally kill a state trooper, then split up in anger, each heading for the Canadian border in the grips of a blizzard. Yet, somehow, they wind up at the same family’s Thanksgiving dinner! What family? Why it’s the Sissy Spacek and retired sheriff Kris Kristofferson house, of course! That’s where it all goes to hell. With Charlie Hunnam and hot little Kate Mara.

A solid drama about adult fathers and sons with an unexpected cast. Young lovers Zach Gilford (“Friday Night Lights”) and Jena Malone head for his family’s “place in the country” for a little romance. Until, that is, his estranged dad, John Slattery (“Mad Men”), shows up with his new squeeze, Gabrielle Union! Uh-oh. Of course the women try to “fix” everything, forcing them to confront their feelings, to air their grievances, and eat vegan food. Sounds like guy hell, don’t it?

THE BALLAD OF NARAYAMA

This all-but-forgotten masterpiece from Keisuke Kinoshita tells of a Japanese village with a wonderful tradition: To save food, anyone who makes it to their 70th birthday gets a free trip to the top of Mount Narayama — but not back down. Done in a haunting, kabuki-like style, we see aged Orin (Kinuyo Tanaka) dutifully caring for her widowed son, trying to find him a new wife before the days of her life tick down to their inevitable trip to the mountaintop. A unique cinema experience from the Golden Age of Japanese filmmaking.