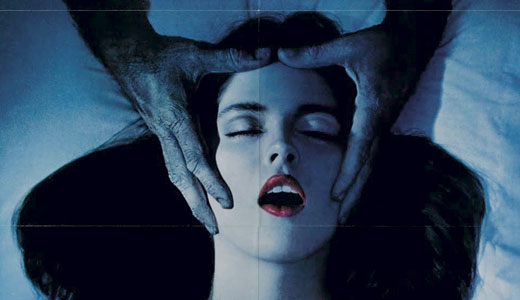 Our favorite horro-hack, Wes Craven, showed his asp in this ultra giggly jiggle-fest that pits screamin’ cuties Maren Jensen, Lisa Hartman and Sharon Stone (yes, that Sharon Stone!) against mad cultist Ernest Borgnine(!) and his snake-handlin’ clan, the “Hitites” (aka “Amish with Attitude”). Forget all that crap you’ve heard about Craven’s doctoral degrees and “thinking man’s horror” — what Wes is really cravin’ is nekkid chicks in a tub of snakes! Now in a groovy Blu-ray release; our highest recommendation.

While not the worst movie ever made, you gotta give this little stinker props for trying. Johnny Knoxville (do we really need to go on?) and Patton Oswalt are competitive, unlikely siblings whose kids are in the same scout troop. In a fit of insanity, Oswalt hijacks their camp sleepover, leading to all manner of dark, young-psyche-scarring misadventures. Maura Tierney (“The Good Wife”) looks embarrassed, comedian Rob Riggle looks for the exit, and Patrice O’Neal takes it (this was his last film before dying of a diabetic stroke in 2011). The perfect platter for your next Bad Movie Party. Enjoy.

You may not recognize the name, but you’re no doubt familiar with his work: Among other things, White was responsible for the look of “Pee Wee’s Playhouse.” Since then, this cartoonist, artist and professional misanthrope has carved out a career as a serious artist by mocking the very artistic affectations that make his works so wonderful. This doc looks at his life and constant drive to destroy the artifice in “fine art.” Nicely subversive.

Shot largely with handheld HD cams, an immersive day-in-the-life cop drama starring Jake Gyllenhaal and Michael Pena as fresh partners keeping the peace in gang-ridden L.A. Then they go home and fight with their wives. In lesser hands, this could have been deadly dull, but watch for outstanding work by stunning Natalie Martinez (“Death Race,” 2008) and several actual gang-bangers recruited from L.A.’s streets. A riveting drama that felt so real it left us paranoid and disoriented. So we watched it again! Excellent.

You may remember this news story: A 13-year-old boy vanishes from San Antonio in 1994, then resurfaces in Spain several years later with a tale of kidnapping and torture. But is he really the same kid? This doc — one of the most entertaining we’ve ever seen — uses news footage and some re-staged scenes to tell the tale. A damning indictment of modern news reporting, international policing, human self-delusion and the universal search for a better life, all turned upside down by a grieving family. Highly recommended.

METHOD TO THE MADNESS OF JERRY LEWIS

A nearly two-hour doc on the work of Jerry Lewis? Before you skip to the next review, take the time to check out this pee-on-yourself funny look at Lewis from back when he was a struggling stand-up (when there were very few comedy clubs to perform in) and half of the immortal musical-comedy team of (Dean) Martin and Lewis. Modern comics consider this guy a god and continue to find pearls of onstage wisdom in his seemingly effortless pratfalls and malapropisms. Straight from the Bortsch Belt, this is a delight.

Wim Wenders … if you need to know more, then you probably aren’t interested. But the rest of us will enjoy his latest wonder: a sensual and artistic exploration of physical perfection made real thanks to new 3-D technology. This began as a joint effort with Pina Bausch, the legendary and influential choreographer, to study dance in ways never before possible. But after Bausch’s untimely death in 2009, Wenders felt compelled to complete the film as a tribute to her vision. Now available in a Blu-ray Criterion release: The definitive exploration of artistic genius, frozen forever in the moving sculpture of 3-D.

You may be tempted to write this off as just another martial arts movie, but first check out the neat comic Steampunk angle. A young genius, tired of being beaten up, goes to study Tai Chi in the village of Chen, only to get beaten up some more. It seems the masters don’t allow their advanced techniques to be taught to outsiders. That’s when an iron-clad army shows up with strange weapons, intent on building a railroad through the town — and the newcomer seems to be the only one who knows what to do. Fun, very funny and cool; with lovely and sparkling Angelababy as butt-kicking eye candy. A delight.

At least the sixth outing (we’ve lost count) in this series of genetically enhanced-warrior mayhem flicks that date back to the 1992 Jean-Claude Van Damme/Dolph Lundgren original. They show up again here in a terrorist-inspired plot with Scott Adkins on the trail of the UniSol agents, led by Andrei “The Pit Bull” Arlovski, who killed his wife and daughter. Doesn’t sound much like a panel discussion on pacifist coexistence, does it? As violent and relentless as you’ve come to expect.

ZOMBIE ASS: TOILET OF THE DEAD

How can we pass up a title like that? This no-budget Japanese horro-comedy plops your usual bunch of uniform-clad teen cuties deep into a backwoods camping trip. Butt hark! A whiff of stank and a howl of the constipated announces the arrival of poop-covered zombies, infected by outhouse parasites from hell! A bit of cleavage, a flash of panties, and maybe a cute little bare bottom or two, plus gags aimed at everything from “Human Centipede” to “Jackass” make this hilariously offensive on so many levels. We friggin’ LOVED it.

Kevin “Hercules” Sorbo has recently been churning out streams of warm-hearted family pablum; high-quality stuff, but often bland and without drama. This one is a step up. Samuel Davis plays an abandoned young man, bullied and on the cusp of losing hope when he is forced to assist the groundskeeper (Sorbo) after school as an undeserved punishment. But the groundskeeper turns out to be just what the young man needs. Not as preachy as it sounds; worth a look.

Originally titled “La mansión de Araucaima,” this Columbian horror/incest/political commentary flick is one of the oddest things we’ve ever seen. It begins in the 1950s, depicting the brutal regime of Rojas Pinilla, then shifts forward in time to focus on Adriana Herrán, a nameless fashion model representing modern decadence and corruption. She becomes the pawn of a mansion full of weirdos heavily into sex, violence and perversion. It never makes any sense, but the director (Carlos Mayolo, Herzog’s “Cobra Verde”) does a great of making you feel icky. Never before seen on these video shores. Check it out.

Luke Goss returns from his fiery demise in “Death Race 2” with help from Danny Trejo, Ving Rhames and Dougray Scott. Even statuesque hottie Tanit Phoenix returns to heat up the already scorchin’ Desert Death Race across the merciless Kalahari. Pretty much more of the same – which is not necessarily a bad thing – from this popular sex-and-mayhem franchise inspired by Roger Corman’s 1975 epic “Death Race 2000.”

HARA-KIRI: DEATH OF A SAMURAI

Aka “Ichimei,” this little-known film, originally filmed in 3D and directed by the great Takashi Miike, leans to his strengths as an impoverished Samurai walks to the gates of a powerful lord, requesting the right to commit ritual suicide in his courtyard. But the lord has had this happen before, with the Samurai brutally slaughtering the citizens inside – or so the lord claims. What happens next is a shocking surprise that we won’t spoil here. A worthwhile addition to any Miike fan’s video collection.

An interesting look at hard-working pillar-of-the-community nut jobs. A security guard and a doctor both fantasize about the other’s lives until the guard murders his wife. The doctor is then drawn willingly into the web of deceipt, which also attracts a former Special Forces police detective. A nicely R-rated tale with a bit of nudity and a great cast (much of it in cameos) including James Wood, Dominic Purcell, Stephen Dorff, David Boreanaz, Walton Goggins, and ravishing AnnaLynne McCord. We liked it!

He was known only as “Rodriguez”, a Detroit singer/songwriter in the late 60s whose otherworldly lyrics and deep, soulful rhythms produced only one album – and it bombed. There were rumors he committed suicide on stage, and he was forgotten … Except in South Africa where a single bootleg spawned a generation of fans amid the brutality of apartheid. This is the story of two SAf fans who set out to find the truth about Rodriguez and, in doing so, the human need for music. Awesome.