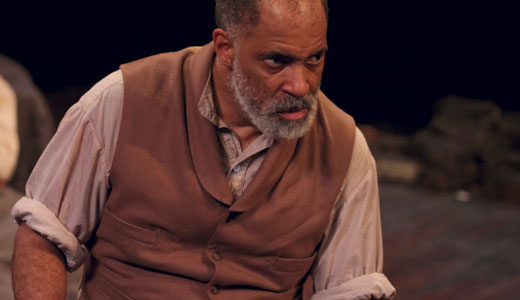 ‘The Whipping Man’
An Actors Theatre production. Written by Matthew Lopez. Directed by Meredith McDonough. Continues through Feb. 2 in the Bingham Theatre, 316 W. Main St. For tickets, go to actorstheatre.org or call 584-1205.

History is written in books, and there is no shortage of books on the Civil War. You can learn about facts and dates and how many died at this battle and where this or that happened, but the lives of the people, the human side of history, is often lost in an account of an event so momentous. This is where the theater can prove its validity as an art form. Instead of relaying facts, it can tell the story of the people who lived it, offering a snapshot of what it may have looked like, sounded like, felt like — to take the audience on a personal journey as opposed to a historical one and inspire reflection and consideration. This is what Actors Theatre’s current production of “The Whipping Man” accomplishes: exploring a tumultuous time in our country’s history in a small but powerful story about three men, one white and two black, on the day after slaves were set free.

Caleb is a Confederate soldier who has made his way home after the South’s surrender. He finds his plantation in ruins and deserted, except for two of the family’s former slaves, Simon and John. Caleb’s leg is eaten up with gangrene from a gunshot, and Simon insists on removing it before the infection kills him. With some whiskey and a whole lot of elbow grease, the deed is done. As Caleb heals from his amputation, the secrets of his family and his past begin to unravel and take hold of the three men.

The script by Matthew Lopez is quite lovely. It’s layered with stories, revelations and several parallels. One of the most interesting is the conceit that Caleb’s family is Jewish, and historically the slaves’ emancipation took place the day before the beginning of Passover. Simon, Caleb and John celebrate with a makeshift Seder and honor the exodus of the slaves of Egypt at the same time Simon and John celebrate their own freedom from Caleb’s family. The text is rich with witty dialogue and powerful speeches and truly enraptures from beginning to end.

All of the design elements, particularly the set by Andrew Boyce and original music by Chris Miller, were perfect and set up the time and sense of place authentically and effortlessly. Especially impressive was the falling rain seen throughout much of the production, indicating the holes in the roof from the house’s war wounds.

The three actors (Frankie J. Alvarez, Biko Eisen-Martin and Michael Genet) delivered brave and often entertaining performances, though there were moments that felt a bit presentational and broad. The script is so intimate, and it sometimes felt as though the actors ran counter to that during some pivotal moments that could have had more impact had they been played with a bit more constraint. That being said, Eisen-Martin’s monologue revealing his relationship with the plantation’s “whipping man” was exquisite and one of the many highlights of a thought-provoking and powerful production.